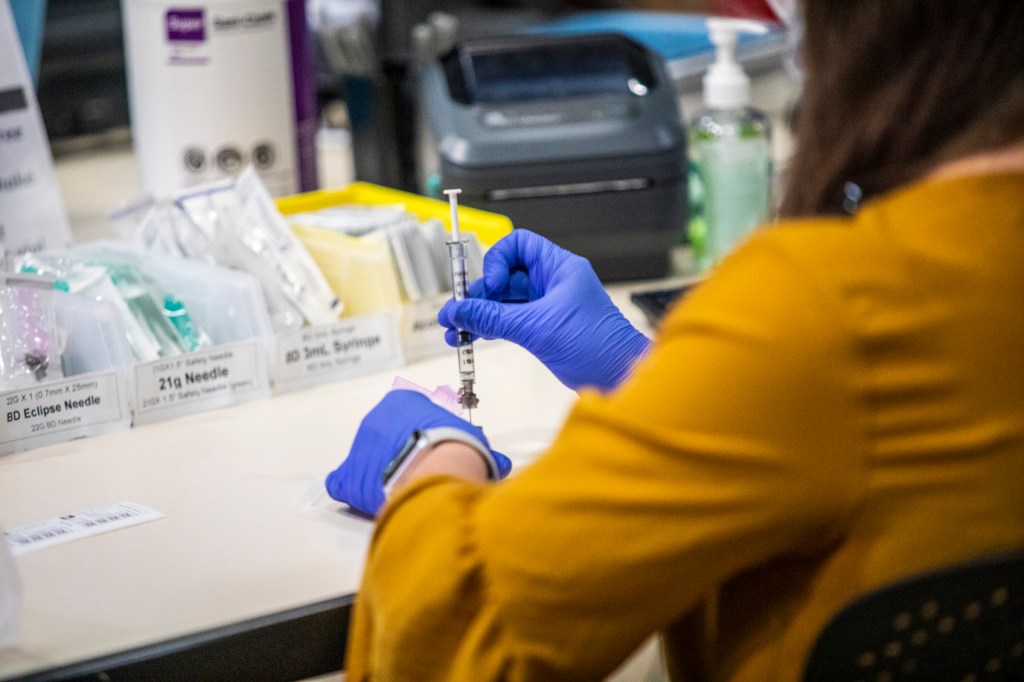 North Carolina officials are shifting the state’s COVID-19 vaccination distribution strategy toward mass clinics in an effort to turn the corner on a slow rollout. But it’s leading to frustration for some hospital systems that have had their anticipated vaccine allocations reduced or eliminated, resulting in thousands of residents seeing appointments postponed or canceled.

Over the last week, North Carolina distributed more doses to large sites, such as Charlotte Motor Speedway, where nearly 16,000 people were vaccinated over the weekend. Other mass vaccination sites also are opening.

But UNC Health on Monday said the 10,000 doses it will now receive this week is less than half of what it expected, and far less than the 30,000 doses it has the ability to administer.

And Cone Health, a private healthcare system based in Greensboro, said it learned late last week that it would not get any additional first doses of the Pfizer or Moderna vaccines this week, resulting in 10,400 people having their appointments pushed back. Cone Health CEO Terry Akin said the decision “shocked” him and noted he is “very unhappy that the state appears to keep changing the rules for vaccination allocation.”

Mandy Cohen, secretary of the state Department of Health and Human Services, said in a statement on Monday that supply shortages are fueling the problem.

“As long as we are getting such a small amount of vaccine as a state, there are going to be challenges and shortages as we try to ensure equitable access to vaccine, while getting shots into arms quickly. We understand this is hard for providers who are doing everything right,” Cohen said.

The North Carolina Healthcare Association, a lobbying group for hospitals, sent Gov. Roy Cooper a letter on Monday criticizing what it views as ever-changing guidance and lack of a clear plan from his administration.

“The responsibility to successfully vaccinate the state’s residents has largely fallen to our state’s hospitals without a clear and consistent plan from the state or the necessary resources for success,” association CEO Stephen Lawler wrote.

The recent acceleration of vaccine administration already has bumped North Carolina from one of the 10 slowest states in the country per capita to the middle of the pack over the last 10 days, according to data from the Centers for Disease Control and Prevention.

Cohen has repeatedly emphasized the state’s desire to lay a strong foundation by making vaccines available in all 100 counties. This partly contributed to North Carolina’s slow rollout and a heightened desire by the Democratic governor to accelerate vaccinations.

A more contagious strain of the coronavirus first detected in the United Kingdom in December was confirmed in North Carolina over the weekend, boosting the importance of getting vaccines administered faster.

Cooper announced Jan. 14 that the state had partnered with Honeywell, Atrium Health and Carolina Panthers owner David Tepper to set up clinics at Charlotte Motor Speedway, Charlotte’s Bank of America Stadium and a future Winston-Salem site in an effort to vaccinate 1 million people in the region by July 4.

“Getting vaccines in people’s arms as quickly and equitably as possible is a top priority for North Carolina,” Cooper said at the time. “Partnerships with businesses, health providers and government like this can help get it done.”

During last weekend’s pilot vaccination event at Charlotte Motor Speedway, Atrium Health vaccinated almost 16,000 people from Friday to Sunday, with an average completion rate of 35 to 40 minutes per vehicle, according to Honeywell. The pilot program’s second phase occurs this coming weekend at Bank of America Stadium, where the goal will increase to about 20,000 to 30,000 vaccinations — which would represent at least one-sixth of the roughly 120,000 new first doses the state expects to receive this week from the federal government.