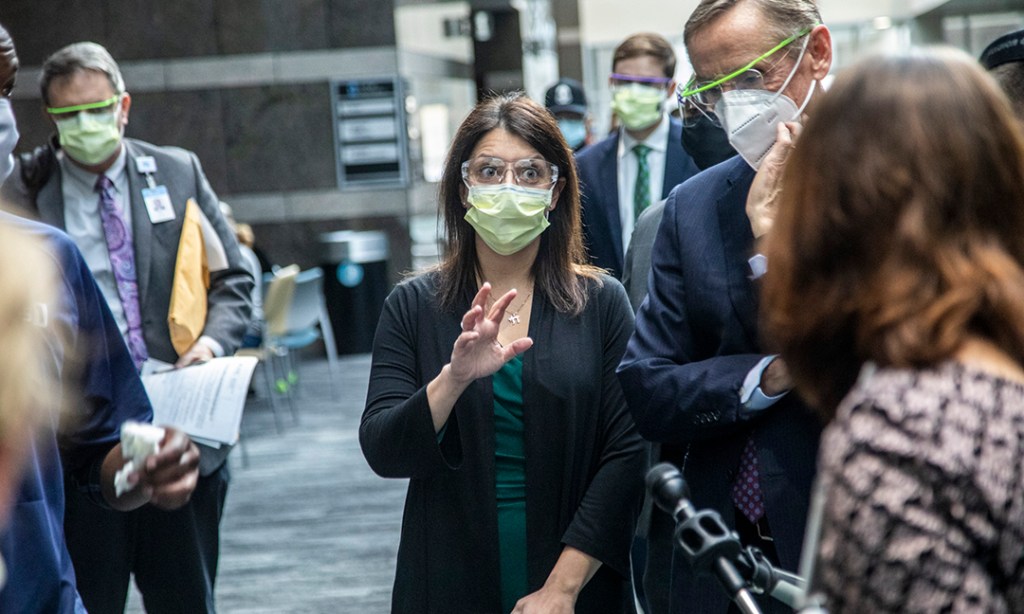 “This week is going to feel particularly tight, with many providers getting small or no allocations,” Mandy Cohen, secretary of the state Department of Health and Human Services, said at a news conference. “But we know that our providers need as much stability as we can give them in what is a very unstable environment.”

As part of the department’s plan, the state will guarantee 84,000 new first doses of vaccines to counties each week based on population for the next three weeks. The remaining 36,000 weekly doses will be used to balance out distributions to counties and improve access for racial and ethnic minorities.

Cohen and Gov. Roy Cooper have pinned the recent vaccine instability on the federal government. Local officials, in turn, have criticized the state for creating a distribution system it believes is ever-changing, poorly communicated and inequitable.

President Joe Biden’s administration will raise the minimum weekly supply to states over the next three weeks from 8.6 million to 10 million, or by 16%. Cohen said on Tuesday afternoon that it’s not yet clear what North Carolina’s new supply count will be. But with nearly all supplies exhausted and more mass vaccination events forthcoming, thousands of North Carolinians with postponed appointments could see further delays.

Jesse Williams, 81, of Reidsville, had an appointment with Cone Health scheduled for Thursday at Greensboro Coliseum. But the provider announced late last week that it would have to push back 10,400 appointments after the state unexpectedly redirected supplies elsewhere.

Williams, who maintains an active lifestyle and longs to play golf and attend church services in person, said his granddaughter scheduled the appointment on his behalf nearly three weeks ago.

“It was just a little disheartening when I heard on the news that this had happened,” Williams said Tuesday. “I’m not upset with it. It’s more that I am disappointed.”

Williams and thousands of others have not been told when they’ll be able to get vaccinated, prompting some to seek help elsewhere.

Pete Glidewell, a 74-year-old real estate agent from Elon, also had an appointment scheduled for Thursday at the coliseum. He now plans to drive 90 minutes to get his vaccine in Dobson, a small town in Surry County.

Cohen said residents of different counties and states are free to travel for their vaccines. She acknowledged on Tuesday that the redistribution of vaccines toward large sites, such as Charlotte Motor Speedway and Bank of America Stadium, was designed to address worries that the state could see its allocation reduced if it didn’t speed up administration of the vaccine.

“We wanted to demonstrate to the federal government that we are ready to take on more vaccine and we want that vaccine here,” Cohen said. “We shifted our posture to one of speed.”

At Bank of America Stadium, where the Carolina Panthers play, as many as 30,000 people could get vaccinated this weekend, according to Charlotte-based Honeywell International, which has partnered with Panthers owner David Tepper and Atrium Health to host the clinic. These vaccinations alone would equate to one-fourth of the state’s current weekly allotment of 120,000 doses. Meanwhile, Williams and others are left waiting.

“Everybody should be treated equally. I agree with that,” Williams said. “But these appointments were set up with the assurance that Cone Health and many of the others would be receiving what they were designated to receive. I don’t feel like we are any more important than they (Charlotte-area residents) are or they are more important than we are. It’s just a frustration that we were expecting to be having our shots and being a little more resilient to COVID-19.”