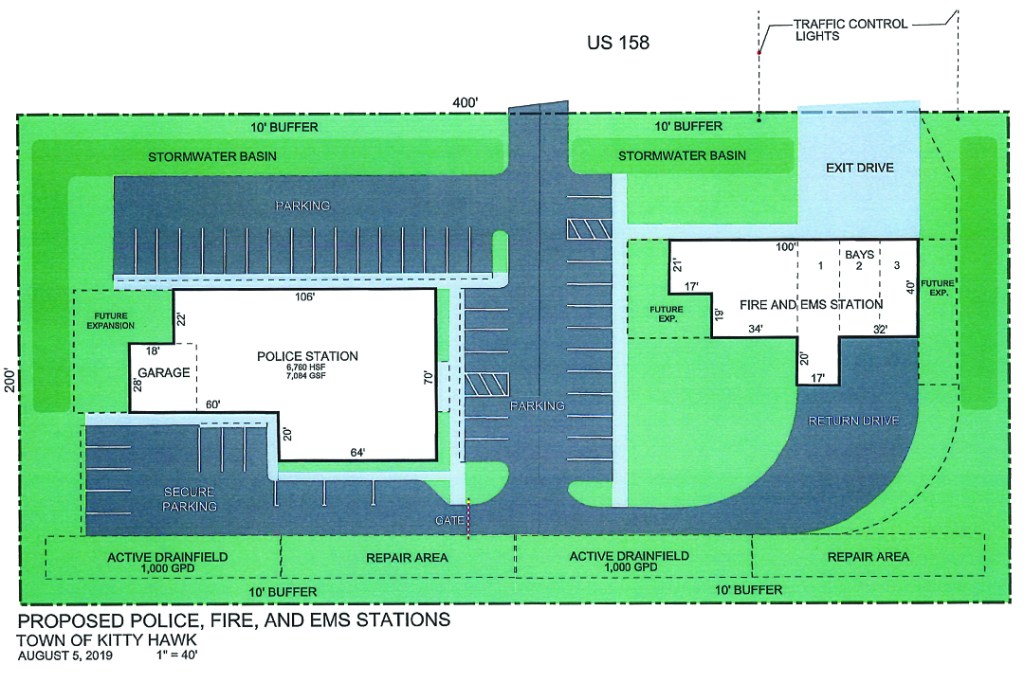 A site plan for a new Kitty Hawk Police-Fire-EMS complex on N. Croatan Highway. The plan was published in the agenda book for Dare County Board of Commissioners along with the stated space and use needs for each organization. Courtesy Dare County

The commissioners quickly approved the contract so the Avon project can occur at the same time as the Buxton maintenance project, which is scheduled for 2022. By combining the projects, construction cost efficiencies are expected to be realized.

Dare County administrators are working on a letter to be sent to Avon property owners. The letter will explain the project. A virtual meeting about the beach nourishment project is likely.

Before the commissioners meeting, Avon property owners Bonnie and Frank Regulski sent an email suggesting a different way to assess property owners for the cost of the Avon nourishment project. The retired couple own their home, which is five houses back from the oceanfront on Moore Way.

The couple suggests raising taxes a modest amount for everyone, but imposing an additional tax on oceanfront properties.

The couple says “we are not opposed to a tax dedicated to beach nourishment, but this tax proposal unfairly places the highest tax burden on property owners east of Hwy 12 but not on the oceanfront.”

The commissioners will proceed with discussions with Kitty Hawk to build a new station for the county’s Emergency Medical Services. Kitty Hawk owns four vacant parcels in the 4900 block of N. Croatan Hwy. Dare’s commissioners put a limit on the expenditure of $500,000.

In the county’s capital improvements plan, the first priority is to replace Emergency Medical Services Station 1. The building which houses the current station is a metal building 30 years old. The station sits on land behind the town’s existing fire station on U.S. 158.

The two new Emergency Medical Services stations were discussed at the Capital Improvements Plan Committee, which recommended the moves to the Board of Commissioners.