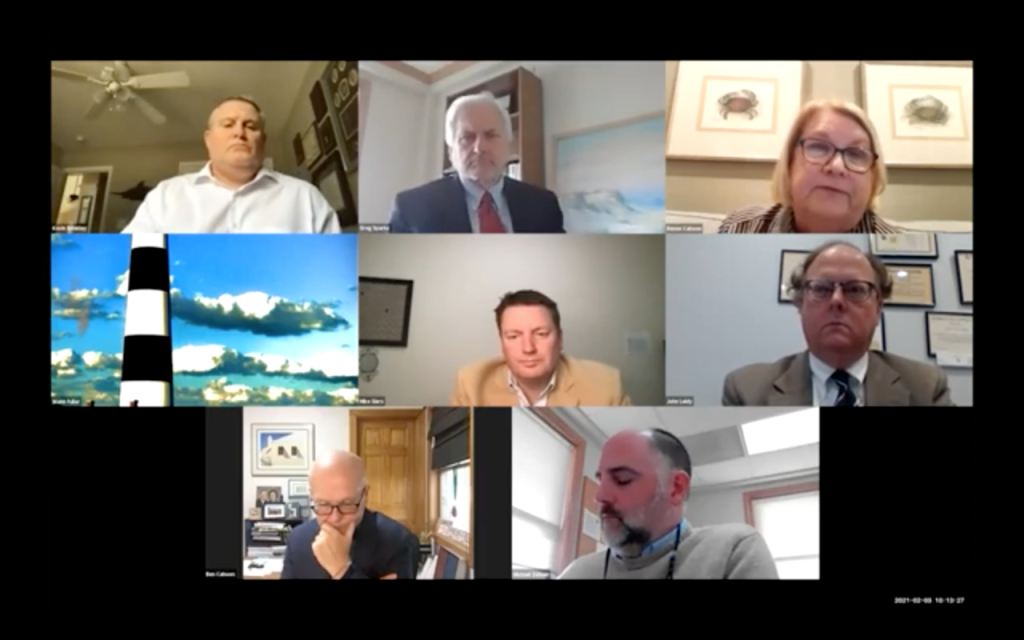 Despite an unusual year with the three-month COVID-related closure, Jennette’s Pier used its time well. In his annual report to the Nags Head Board of Commissioners at its February 3 meeting, executive director Mike Remige said Jennette’s Pier focused on R&R projects, including roof, ceiling and fixture repairs from Hurricane Dorian.

Jennette’s Pier has also ordered a new, quieter wind turbine to replace one that was damaged, has two new pygmy sperm whale skeletons on display for public viewing and assisted with a local resident’s launch of The Little Free Library kiosks situated around Nags Head. They are also offering free wi-fi in the parking lot geared toward helping local students who may not have access at home. Though most of the field trips and summer camps were canceled in 2020, with the coronavirus vaccine available, Remige is “hoping to get a little more back to normal this summer.”

Jennette’s Pier will look forward to hosting the Waves to Water prize in the spring of 2022, which is a Department of Energy-sponsored competition that seeks innovators to design water desalinization systems powered by marine renewable energy. “Winners will be chosen based on the quality of water they produce, how much water they produce, and how well their device performs in ocean environments,” Remige said.

Remige also announced that Jennette’s Pier has been chosen by the Department of Energy to fund the creation create an Atlantic Marine Energy Center (AMEC), which exists to advance marine energy solutions and testing opportunities.

Next, oceanographer Rachael Housego presented to the board her team’s research through an app called iFlood, which seeks to understand how groundwater contributes to flooding. Thanks to rigorous testing and community participation, Housego and her team are able to more accurately predict flooding in Outer Banks regions.

The public hearing portion of the meeting began with a request for the board to consider a text amendment to the Unified Development Ordinance (UDO) regarding nonconforming hotels. There are nine Nags Head hotels that are affected by the UDO. The amendment would allow for those hotels to pursue a conditional use permit that could enable improvements or enlargements to their existing structures, which is currently not allowed under the existing UDO provisions.

The board heard from Alex Moore, owner of Surfside Hotel, located at 6701 Virginia Dare Trail, who is affected by the current regulations. Though the hotel has enjoyed good success over the years, he approached the board in support of the amendment. “We need the opportunity to improve our hotels,” he said. Currently Surfside Hotel is unable to make sign improvements or expand. His goal is to improve functionality and visual appeal. “Things change over time and we have to adapt to them,” he said. “We now compete with mega-rentals that house thirty guests.”

The board agreed. “I’m anxious to get this back to the Planning Committee so we can help these structures remain a viable part of our town,” commissioner Kevin Brinkley said. The board approved a motion to continue the public hearing at the March 3 meeting.

Next, planning and development director Michael Zehner gave a presentation on outdoor lighting standards, stating, “LEDs have made our current regulations obsolete.” The conversation focused on streetlights and commercial lighting and how best to maintain the town’s commitment to a dark sky while meeting the lighting needs of the community with new technology.

In new business, interim town manager Greg Sparks requested formal action to proceed with the beach nourishment project. Commissioners considered two options and opted for the smaller-scale project, a FEMA-supplemented project with Coastal Storm Damage Mitigation grant revenue. It would place 567,000 cubic yards of sand in regions two through four, requiring $480,000 in town funds. Option two included 1.47 million cubic yards of sand spread over ten miles, but would result in a loss of $3.2 million in FEMA funds and did not increase the efficiency of the project.

The board also discussed the formation of new municipal service districts (MSD), an area of town where an additional tax is levied, as a means of funding beach nourishment. Four additional MSDs were proposed:

– From Whalebone Junction to Bonnett Street, to include all properties east of US 158.

– From Whalebone Junction to the southern town limits, to include all properties in South Nags Head.

– From Bonnett Street to Eighth Street, to include all properties east of US 158.

– From Bonnett Street to Eighth Street, to include all properties east of NC 12.

The meeting concluded with discussion regarding the residency requirement for the town manager position. The board was in agreement that the town manager should live in Nags Head, but allow flexibility in the timeframe needed to secure housing.

Other agenda items include recognition of facilities maintenance supervisor Ed Hawley for fifteen years of service and finance director Amy Miller for five years of service as well as the re-appointment of Megan Vaughan to the Planning Board and Tina Adderholdt as an alternate to the Board of Adjustment.

New committee on marine resources and aquaculture chaired by Hanig