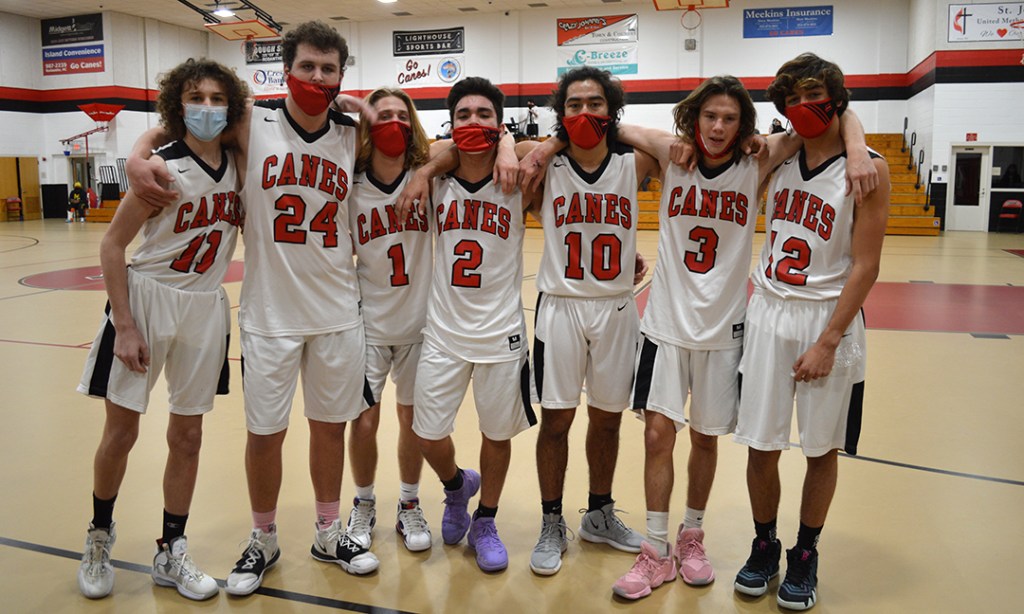 The Cape Hatteras boys trailed by four at the half and 10 at the end of the third quarter.

In the fourth, the Hurricanes went on a scoring binge and tied the score at 41 with just over three minutes 20 seconds left in the game.

Bear Grass scored two field goals and a free throw to pull ahead 48 to 43. Victor Caldera connected at the free line for Cape Hatteras.

With 9 seconds left, Kaleb Spake hit a three pointer to bring Cape Hatteras to within one, 48-47. Cape Hatteras fouled. For Bear Grass, Bryce Carlisle missed the front end of a one and one.

For Cape Hatteras, Kaleb Spake pulled down the rebound and brought it up court. He passed to Osmar Padilla. Spake broke for the basket. Padilla made a great pass in heavy traffic.

Spake pushed the ball up and over defender Brandon Arrants. The ball swished the net just as the buzzer sounded.

It was a great win for Cape Hatteras seniors Charlie Conner and Kaleb Spake and Victor Caldera on Senior Night. 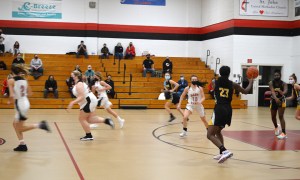 Manteo’s Erica Bailey (No. 23) waits for the basketball in a game against Cape Hatteras Secondary Feb. 12, 2012, in Buxton. Bailey led all scorers with 16 points. Despite her points, Cape Hatteras defeated Manteo 42-40. M.H. Goodloe-Murphy photo

The Cape Hatteras girls played Manteo instead of the Bear Grass team, which was quarantined.

Manteo pushed in the fourth quarter. With 18 seconds left, Cape Hatteras led 40 to 38.

Bailey led all scorers with 16 points. For Cape Hatteras, Kylie Phillips scored a dozen, as did Brianna Fordham for Manteo.