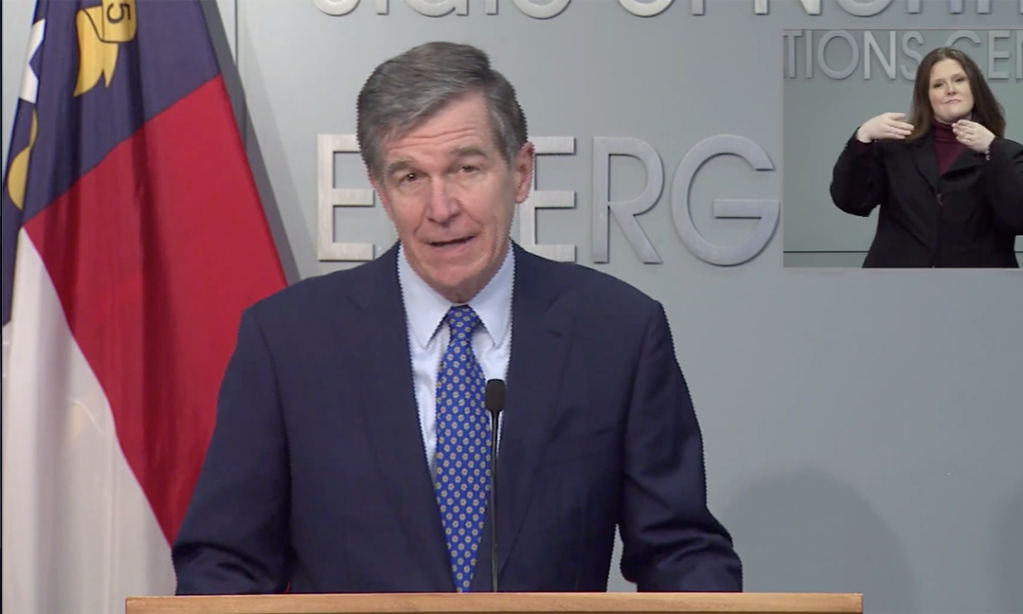 With cases and other key metrics trending downward in North Carolina, Gov. Roy Cooper on Wednesday announced the state will ease gathering and occupancy restrictions and end its 10 p.m. statewide curfew starting Friday.

For the first time since early into the coronavirus pandemic, the governor is allowing bars and taverns to offer indoor service. His new executive order also increases alcohol sale cutoff times by two hours from 9 p.m. to 11 p.m. and lets those businesses operate at 30% capacity up to 250 people. If they follow state health guidelines, such as mask wearing and physical distancing, night clubs, conference spaces, indoor amusement parks, movie theaters and sports and entertainment venues may also operate with the same capacity.

“Easing these restrictions will only work if we continue protecting ourselves and others from this deadly pandemic,” Cooper said at an afternoon news conference.

Larger sports venues able to seat over 5,000 people can host up to 15% of their fans, provided they adhere to additional safety restrictions. PNC Arena, which hosts Carolina Hurricanes hockey games in Raleigh, and the Spectrum Center, which is home to the Charlotte Hornets basketball team, would be able to let in about 3,000 people.

Shortly after the news, the Hurricanes announced the team will begin hosting fans for its March 4 game against the Detroit Red Wings.

“The Caniacs are the backbone of our franchise, and we are thrilled to welcome them back to PNC Arena,” said a statement from Don Waddell, the team’s president and general manager.

For some businesses, Cooper’s announcement is too little too late. The pandemic and Cooper’s directives prompted many bars to cease operations, said Zack Medford, president of the North Carolina Bar and Tavern Association. Still, he praised Cooper’s decision, calling it a “huge, hard-fought win.”

“We look forward to continuing to build on this success with the Governor’s Office, and helping get our bar and taverns back on their feet after such a devastating year,” Medford said in a statement.

During the news conference, Cooper reiterated his opposition to a school reopening bill as it’s presently written. The proposal introduced by Republican state lawmakers and backed a handful of Democrats would give the state’s 115 districts about two weeks to offer at least partial in-person instruction to all of its pupils.

The vast majority of school boards have elected to reopen, but some still remain fully remote. Cooper has until late Saturday to sign or veto the bill before it automatically becomes law. Cooper “strongly encourages” the unopened districts to get kids back to the classroom but opposes the statewide mandate that he believes does not gives school boards the flexibility they need to respond to an emergency amid the pandemic.

In response to pressure from teacher advocates, Cooper allowed educators, child care workers and school staff to begin getting vaccinated on Wednesday. Other “frontline essential workers,” including the governor and other elected officials, will become eligible on March 10. It will likely take a while for many vaccine providers to free up doses for teachers and other workers amid strong demand from residents 65 years or older who have been eligible since mid-January.