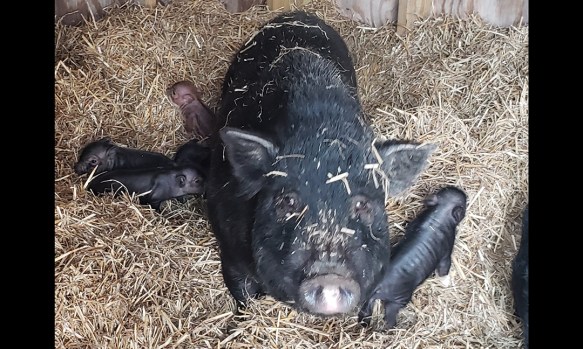 One of the rescued sows gave birth after arriving at Over the Rainbow Sanctuary. Courtesy Debbi Torres 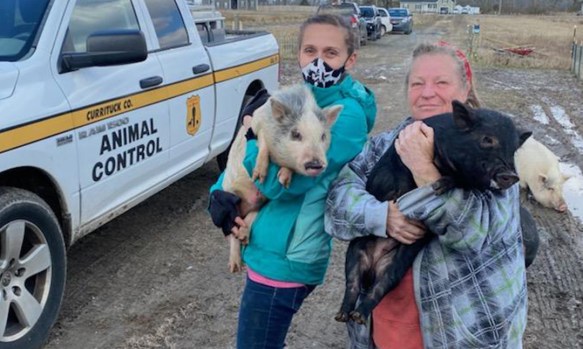 Some of the pigs now in the care of Over the Rainbow Sanctuary. Courtesy Debbi Torres 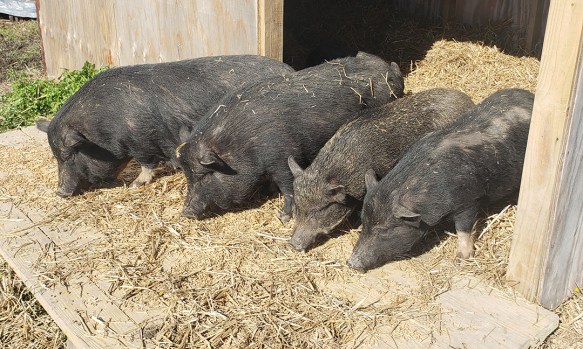 Some of the pigs now in the care of Over the Rainbow Sanctuary. Courtesy Debbi Torres

Seventeen pigs were surrendered to the Currituck Animal Shelter last month in response to public complaints regarding the welfare of the pigs. The pens were overcrowded and male and females were not separated, leading to overbreeding. “It was not a good situation for the pigs,” said Brandon Dozier, one of the animal control officers who helped to collect the pigs on February 20.

Transporting 17 pigs was no easy task. Dozier, shelter manager Rachael Stone and animal care technician Caitlin Garret wrangled the swine into eight dog kennels, an animal control truck and a van. The business that surrendered the pigs agreed beforehand to hold off on feeding them that morning so they would go willingly into the kennels, where food awaited them.

All the animals made it safely to Over the Rainbow Sanctuary in Moyock, where they are being cared for by owner Debbi Torres. One sow who was pregnant upon rescue has given birth safely to a litter of six piglets, bringing the total rescue to 23 pigs.

According to Dozier, the establishment that surrendered the pigs – which also sells rabbits, chickens, kittens, ducks and other animals – is getting out of the pig business for good. The owner willingly surrendered them all. Overpopulation is a problem with pigs. “We should require spaying and neutering just like we do with dogs and cats,” Dozier said.

Over the Rainbow Sanctuary is committed to helping abused, abandoned or mistreated pigs and educating the public about the realities and responsibilities of owning pigs. According to the mission statement at overtherainbowpigs.com, “Pigs can be the most wonderful pets for some people, however most are purchased without proper research as many animals are. There is nothing cuter than a baby pig or puppy, but when they start betting bigger than the owner had planned and the pig has not been spayed or neutered at a young age, the pigs often become more than most people can handle…”

“Pigs are not the pet for everyone,” Torres said. “Ninety to nine-five percent of pigs that are bought as pets are rehomed or given away,” Torres said. According to Torres, unfortunately, this is not a localized problem. “Every rescue I know is full. I have friends who have two hundred to three hundred rescues.”

The problem stems from certain breeders who attempt to breed the runts to keep the pigs small. The result is often an underfed, unhealthy pig. “The pigs literally starve to death,” Torres said.

Torres also advised that any pig under 300 lbs. is a mini pig: “It’s a huge issue,” she said. “People are terribly misguided.”

For the right owner, pigs can make wonderful pets. “Pigs are smarter and more loyal and more dedicated than dogs. They die from broken hearts and they cry real tears,” she said.

Torres urges people interested in owning a pig to do their research, and to start by visiting www.minipiginfo.com for information. She strongly suggests adopting a rescued pig rather than purchasing from a breeder. Over the Rainbow pig sanctuary has a thorough adoption application process, but struggles to find good homes for the pigs. Even when pigs are adopted, “I’m constantly having to take them back,” Torres said.

Currently, the greatest need for the sanctuary is donations to buy food and bedding for the animals. Torres spends thousands of her own money each month to care for the pigs. She spends $300 every four to five days for feed alone.

For more information on donating, volunteering or adopting a pig, contact Torres at 252-619-8498, email debbi@overtherainbowpigs.com or message her on Facebook.