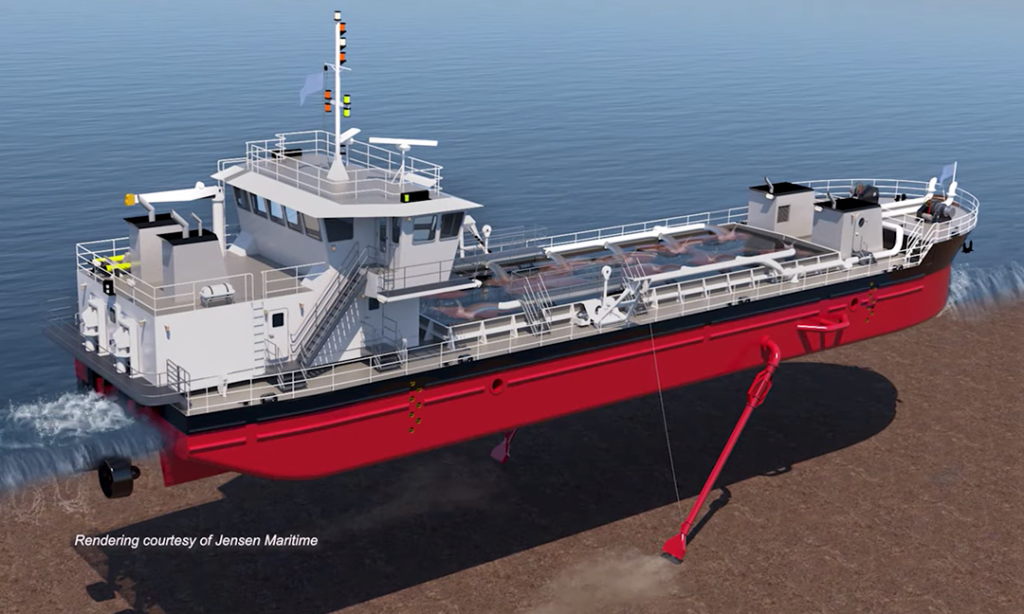 Still from Dare County video announcing the construction of the Miss Katie.

Commissioner Jim Tobin announced at the Monday, March 15 meeting of the Dare County Board Commissioners that construction of the special purpose dredge, the Miss Katie, is underway in Louisiana.

County manager Robert L. Outten also announced that the U.S. Army Corps of Engineers sidecaster dredge the Merritt has broken through a clogged South Ferry Channel in Hatteras Inlet. The sidecaster will make sure the hopper dredge Merden can work in the channel.

Outten asked for additional funds to continue the dredging operation in Hatteras Inlet. The commissioners approved moving $60,000 to the Hatteras dredging fund.

Commercial and large recreation vessels have not been able to transit Hatteras Inlet to the bar because the South Ferry Channel has been shoaled.

Dredging Dare County’s inlets and waterways is a top priority for the county’s Waterways Commission and the Oregon Inlet Task Force, which will manage the under-construction dredge.

At the March 15 commissioners meeting, a video highlighting the new hopper dredge was debuted. To watch the video, titled “The New Dredge — ‘Miss Katie’ — Arriving April 2022,” go to youtube.com/watch?v=-jy3yNO5MiA or view below:

The Miss Katie is the result of a public-private partnership with the state of North Carolina.