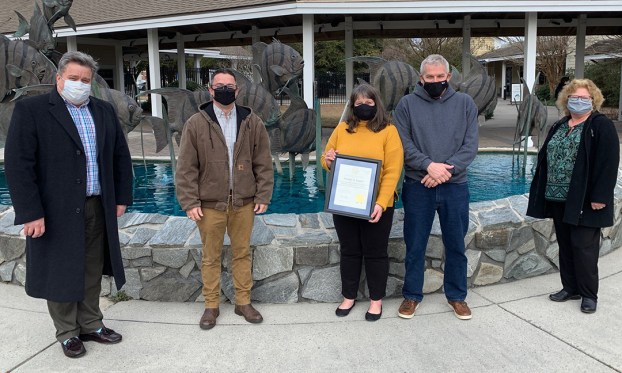 Former North Carolina Aquarium staff member Jennifer Gamiel was presented and honored with the Old North State Award last month. The award, issued by Governor Roy Cooper, recognized the “dedication and service beyond expectation and excellence to the Great State of North Carolina.”

“As the visitor and member services coordinator, Gamiel’s commitment to customer service for an annual audience of more than 350,000 visitors was the shining star of her many contributions to the State of North Carolina, its residents and aquarium visitors,” stated a press release from the aquarium. “Her development of policies and procedures were passed through each of the North Carolina Aquarium facilities and became the gold-standard for customer service across the aquarium division. Always putting the guest’s needs first, she set an example that not only impacted her team, her colleagues, and her coworkers – but also created a culture of customer care that has been adhered to for decades.”

Gamiel is credited with other key contributions, such as overseeing and growing the aquarium’s security and safety department, and shepherding in a new point-of-sale system for the North Carolina Aquarium Division. Gamiel quickly became an authority on the system and, alongside her counterparts, was key to supporting the successful implementation across the aquarium division and the North Carolina Aquarium Society, stated the press release.

A graduate of the Outer Banks Chamber of Commerce’s Leadership OBX program, Gamiel is respected for her community service work, commitment to the Roanoke Island Food Pantry and service to the Mount Olivet United Methodist Church. She has worked closely with residents as well as in her role at the aquarium to develop and steer programs that bring food and other services to those in need of support.

Gamiel received the award from Larry Warner, aquarium director, and a small gathering of aquarium staff and peers, including Carl Curnutte, executive director of the Elizabethan Gardens; Angie Brady-Daniels, marketing director for Manteo Furniture and Appliance; and Pastor Matt Seals with Mount Olivet United Methodist Church; each of whom wrote letters of support on Gamiel’s behalf.