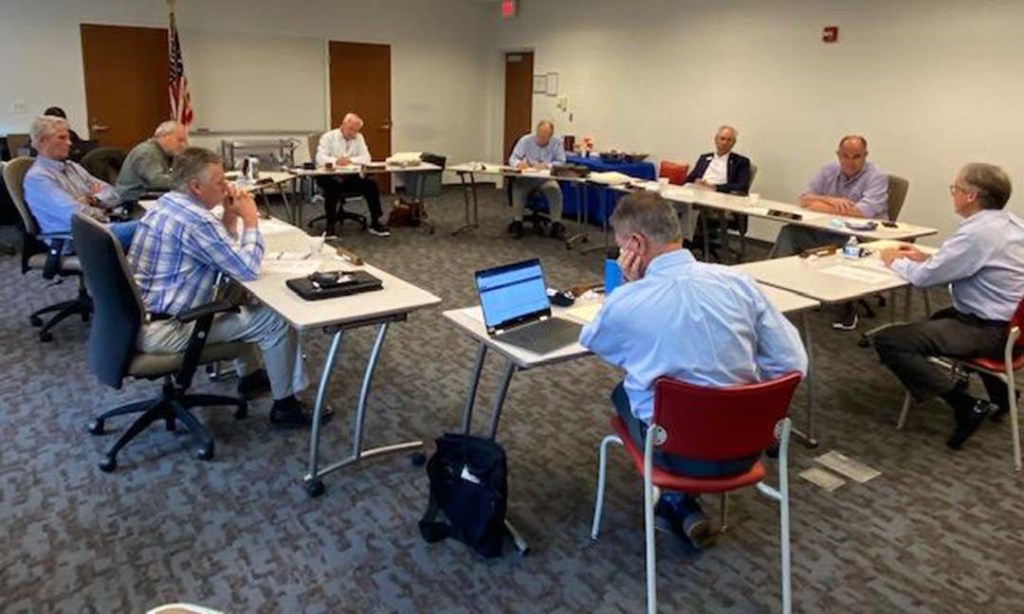 “I could not be more proud. We’ve just done some phenomenal things in this county,” said Robert L. Woodard, chairman of the Dare County Board of Commissioners, as he opened the board’s retreat March 24, 2021.

He listed a few of the board’s accomplishments: the new dredge under construction, a new animal shelter set for a ribbon cutting March 31, a new College of The Albemarle academic building.

County manager Robert L. Outten said the retreat was for the benefit of the county administration.

“We need to hear more from you,” he told the commissioners. Outten was looking for priorities and when and where to put those priorities into the budget. The retreat agenda was 17 items long with some items from Outten and others from commissioners.

At the end of more than five hours, the commissioners had worked through the agenda.

Some items were accelerated in the Capital Improvement Plan.

Studies were ordered for other problems and direct contributions to programs were agreed to.

Earlier this year, Dare County agreed to purchase a piece of property adjacent to the existing fire station in Kill Devil Hills and Dare County’s EMS Station 1, which serves as headquarters for the emergency medical system and a response station. Outten said the county will close on the property in October 2021 and indicated that items still to be resolved are who will build the facility and how to make financing work.

These projects will be advanced in the capital improvement budget to next fiscal year 2022. The Rodanthe EMS station, located at the Chicamacomico Banks Fire and Rescue Department, is the next facility on the list.

Roanoke Island Youth Facility: The county’s after-school program regularly serves between 45 and 60 kids. The current building is inadequate for the number of young people and it has no outdoor space. The board is exploring options to expand the program. Meanwhile, Outten will work a figure into the Capital Improvement Plan.

Employee Items: Three topics were discussed by the board: flex scheduling, compression in salary grades and 401K for staff.

Outten said flex scheduling doesn’t work in some departments, like Sheriff’s office, emergency medical services, public works and parks and recreation. He maintains the county has not had any problems.

“We know it has worked well up to now,” said Outten

On flex scheduling, Outten will return with a proposal. He will survey other counties.

Regarding compression in salary grades, Outten said the county doesn’t have “a good way to move through a grade.” Currently, the only methods are merit pay and longevity.

He cited public works truck drivers as an example. When Kill Devil Hills and Nags Head post a vacancy, Dare loses an employee.

Commissioner Steve House “do something with merit and longevity.”

Tobin suggested paying more for certifications and looking at the military system of advancement.

The board and Outten want to figure out how to advance employees through a grade and avoid another salary study that came with a $4.5 million price tag spread over two years.

Over several budget years, a 401K contribution to staff accounts was started, reduced and eliminated. Woodard reported that employees did not want it the last time. No action was taken, though the idea will remain on a list.

In a specific personnel move, the commissioners authorized a stipend for an existing emergency medical services helicopter pilot to be trained to administer Federal Aviation Administration in-air pilot tests.

Outten said the purpose is to find out what “getting into the stormwater business means.”

Flooding on the north end of Roanoke Island was discussed. The county and NCDOT have pumped stormwater. A plan was created and the next step is for the communities involved to come up with a portion of the money.

Twice, Outten said the county is not pumping any more.

Woodard said a berm was incomplete. When an adjoining property fills, the stormwater runs out of the lot that is not bermed. A homeowners association does not have the money to complete the berm. The county will provide material, but property owners will need to do the work.

Public Works Facilities: A study to ascertain the needs of the various facilities in the Public Works Department is advanced. The study is pegged to cost $50,000 and will include the transfer station in Buxton, which needs to be reworked.

Dare County is forecast to receive $7,177,668 from the American Rescue Plan Act in two doses. The first dose must arrive 60 days from March 11, 2021, when the legislation was signed by President Joe Biden. No guidance on spending has been forthcoming at this point. However, one of the specific items where funds can be invested is broadband. The decision by the commissioners was to use federal funding and not to budget local dollars.

Library Upgrades: New carpet and painted walls have already been upgraded in the Manteo branch. To complete the project, $35,000 to $40,000 will be needed to install new overhead lighting. The expense will be carried in the public works budget.

C&D Tipping Fees: Outten reported that tipping fees are not supporting the C&D operation. The site on Dare’s mainland is estimated to have 46 years before it fills up. The manager presented two options: raise tipping fees or open the site up for use by Hyde and Tyrrell counties. The commissioners settled on opening the site to the two neighboring counties and instructed Outten to get permits from regulating agencies for expansion. The budget ordinance will include language that tipping fee can be adjusted as needed.

Dare Challenge: The existing residential substance abuse treatment program can house 12 men and staff. The program is mounting a capital campaign to expand facilities to house twice that many and grow its work and community service program. The total bill is $1.5 million.

Commissioner Ervin Bateman presented Dare Challenge’s program, its debt-free operation, its goal to be co-ed in the future and encouraged the commissioners to support the campaign.

“We ought to have some skin in the game,” said Woodard. House agreed.

The budget line item for Recovery Court will grow with a $200,000 one-time charitable contribution for Dare Challenge.

Graveyard of the Atlantic Museum: Commissioner Danny Couch made a presentation about funding the permanent exhibits at the museum at the end of Hatteras Island. The current budget for the interactive displays and more is $4.5 million. Couch was looking for support from the board to get the project funded through the General Assembly. A strategy was worked out.

The governor’s recommended budget was released the same day. The budget recommends $4.2 million for the Graveyard of the Atlantic Museum.

Roanoke Island Historical Association: The association presents The Lost Colony outdoor drama, which will be go forward this season. The drama was not presented last year. Among the large expenses is replacing the seating. Woodard is an ex-officio member of the association’s board. He asked the board for a one-time contribution of $100,000 and will deliver the message “don’t come back to the well.”

Woodard said consultation is underway with Native American tribes and some rewriting of the play is underway. Tobin said he objects to the direction the play is going. He is “totally against the cancel culture.” Woodard affirmed Tobin’s statement. Commissioner Rob Ross said “I struggle with this stuff.”

Sediment Management/Placement: Tobin urged the commissioners not to hesitate on funding the recommendations recently received by the board about where to place dredge material. Under current policy, local governments must provide sites for dredge material, a responsibility previously provided by the U.S. Army Corps of Engineers.

Toward the end of the retreat, Woodard expressed frustration about progress on essential housing. “I’m not optimistic.”

The board concluded the retreat with a closed session. Outten reported that the board gave the county attorney guidance regarding a real estate matter and took no other action.