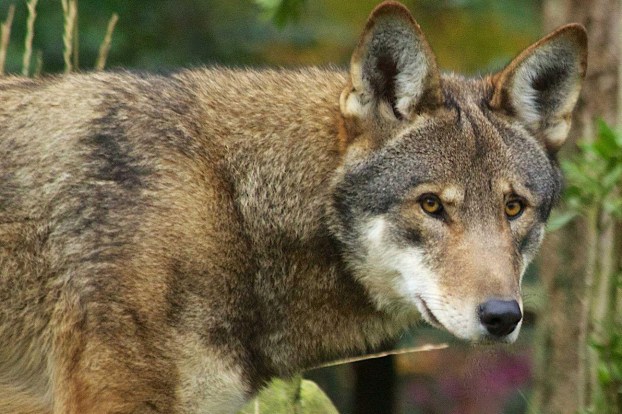 We thought this our best film yet, with plenty of drama as well as rare and remarkable footage of coastal Carolina’s wildlife. The filming coincided with the Evans Road Fire, burning some 26% of Pocosin Lakes’ 110,000 acres. If that was not excitement enough, the opening included a lengthy fight between two large male black bears.

We thought of one thing that would make the film complete. That was including the red wolf. There were then five packs of three to five wolves each on the refuge. Red wolves tend to be secretive and Blake’s integrity as a wildlife cinematographer did not allow for using baiting, blinds, staging and such tricks that wildlife documentaries often resort to — or putting in film footage taken elsewhere than on the refuge itself.

My ears perked up. “You have that sound footage? Do you also have some good night visuals?”

“Sure, how about with a nice full moon?”

“Can we put those together then write script to go with it, noting that this creature is rarely seen because of its reclusive nocturnal habits?”

So the red wolf made it into the film. But has not been quite so lucky of late in making it in the wild. In the early 2000s there were over 100 red wolves roaming the expanse of the Albemarle-Pamlico Peninsula, but since 2018 the population has declined by 70%.

The U.S. Fish and Wildlife Service, whose responsibility it is to enforce the Endangered Species Act, is charged with failing to continue effective practices, such as new releases of wolves into the wild and efforts to prevent hybridization between wolves and coyotes, by Defenders of Wildlife and other organizations who sued in federal court. In November 2018 the court ruled in their favor, but things still look bleak for “old red.”

Many may say with a sigh that perhaps it is time to give up on saving this beleaguered species. But not so fast. Let us review how far conservation efforts have come thus far.

The red wolf (Canis rufus) is the first species extinct in the wild and restored to part of its native range, which once included all of the southeastern United States. In 1967 it was listed as an endangered species and in 1980 declared extinct in the wild. The red wolf recovery began in 1987 with the release of four pairs in the Alligator River N.W.R. located in mainland Dare and Hyde counties.

This region was favored by the U.S. Fish and Wildlife Service primarily for three reasons.

First of all, the Albemarle-Pamlico Peninsula is defined by the Albemarle Sound to the north, the Pamlico Sound to the south and the Croatan Sound to the east. The peninsula is about 3,200 square miles covering five counties. That gives a large carnivore the room it needs to roam for food and mates, but keeps it more or less geographically confined.

Secondly, ecosystems need apex predators, as the keystone to the complex dynamics of a food web. Red wolves fill this role by helping control an expanding deer population and midlevel predators such as raccoons, foxes and coyotes that expand into the gap left by missing apex predators. The red wolf is intermediate in size between coyotes and gray wolves, males weighing 44-90 pounds and females 35-64 pounds. Coyotes weigh 1/3-1/2 as much, stand about 4 inches shorter at the shoulders and are of a slighter build. (The virtual explosion of coyote populations in the east in recent years can be largely explained by the absence of larger predators such as wolves and mountain lions.)

Thirdly, the Albemarle-Pamlico Peninsula is mostly rural, much of it in marshland and pocosin, and 44% owned by timber companies, mainly Weyerhaeuser. Farming and commercial fishing are the principles occupations and agriculture is primarily in crops such as soybeans and corn, rather than livestock. This provides habitat space for wolves and minimizes encounters between them and humans.

Contributing to this potential man-and-wolf harmony is that fact that red wolves are naturally reclusive and hunt singling or in small packs. It is thus a very different situation than the larger, more social and more aggressive gray wolves — introduced to control elk herds over-browsing riverine vegetation — wandering out of Yellowstone National Park on to cattle ranches.

There are biological issues, e.g., is the red wolf an authentic species (which has been mostly settled by DNA and fossil evidence), and legal issues, matters mostly beyond my expertise. So with my remaining column space let me conclude with the “gut issue.”

The 18th century Scottish philosopher David Hume said “Reason is and always ought to be the slave of the passions.” So what is the “passion” or emotion that drives the controversy around the red wolf?  Usually the root emotion in such cases is fear. Why do we tend to fear wolves, read our children “big bad wolf” stories and make werewolf movies popular?

A kindred question is why do we fear snakes? Is it driven by an irrational fear? (Granted a few are venomous, but the rest harmless and the differences not that difficult to discern.)

Perhaps a story will make the point. My wife Carolyn was a teacher for 30 years in Pitt County schools. Fred made quite a commotion one day in her 7th grade science class.

Carolyn’s late husband and a friend went fishing one sunny Saturday at Lake Mattamuskeet. They came back with some fish but also a (dead) large “water moccasin.” The former were for supper, the latter to go in Carolyn’s specimen collection for her science students. She named the snake Fred.

She put Fred in a black garbage bag and placed it in the refrigerator to keep until Monday’s class. At the beginning of class she says to her students: “I have something interesting to show you to go with our unit on reptiles. Don’t worry it’s quite dead.”

She reached into the bag and out comes the snake carcass. Pandemonium ensued. Desks turned over, books and papers taking to the air and all 30 some students dashing to the windows to attempt their escape.

Well, Fred went into a gallon pickle jar with formaldehyde and was displayed on a shelf for nearly a decade.

An acquaintance hearing the tale asked Carolyn, “You did get rid of that refrigerator, didn’t you?”

End note: If you want great video of red wolves, see the STRS Production film on the Alligator River NWR. One of the shots was a close up of a red wolf standing in the middle of the road, as if trying to make up for missing its debut in the Pocosin Lakes film.

Social Security Matters: Ask Rusty – Will my widow’s benefit replace my own SS?