For many, the Kitty Hawk Pier is a landmark of historical and sentimental value. Built in 1953, it was one of only three coastal piers in the Outer Banks. Then, as today, it was a hot spot for catching bluefish, puppy drum, spot and flounder. “You name it, you can usually catch if it’s in season,” said Jamie Chisholm, director of sales and marketing for the Hilton Garden Inn. Hilton purchased the land in 2006, which included the pier, and built the hotel.

All summer, the hotel staffs the pier with experienced anglers and keeps fishing rods, bait and tackle for guests to use. Though the pier is for hotel guests, they do sell a small number of passes. “We like to offer them to locals who have fished here their whole lives,” said Chisholm.

The pier has undergone many changes throughout the years. Owner Sterling Webster Sr., prior to buying the Kitty Hawk Pier and the surrounding land that the Hilton now sits on, often enjoyed having breakfast in the Kitty Hawk Pier Restaurant and after purchasing the pier, he wanted to preserve the iconic building that he had enjoyed so many breakfasts in.

Weather events have caused damage to the pier, notably the Ash Wednesday Storm of 1967, Hurricane Gloria in 1985, Hurricane Fran in 1996 and Hurricane Dennis in 1999. Like many homes and structures in the Outer Banks, the pier experienced tremendous wreckage from Hurricane Isabel in 2003, its 160 mph winds and washing away a large portion of the pier and Pier House. Replacement costs were estimated at $1.6 million. The pier remained closed for three years until the Hilton Garden Inn purchased the property and began an extensive repair and reconstruction project. Many of the original materials were used to maintain the pier’s character and historic appeal, while updating and modernizing the structure. It reopened in 2008.

Today, Kitty Hawk Pier is again a thriving spot for fishing. The Pier House is a popular venue for weddings, local meetings and events. The pier is open from 7 a.m. to 10 p.m. unless there is a special event.

A children’s fishing tournament is planned for April 24.

Hilton Garden continues with renovations and upkeep, including a new ramp in 2020. “We want it to last,” said Chisholm. “We want it to stay here as an iconic pier here in the Outer Banks.” 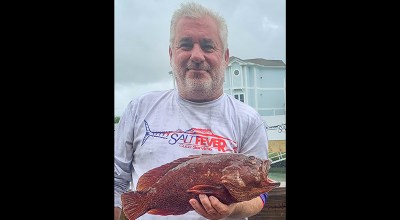