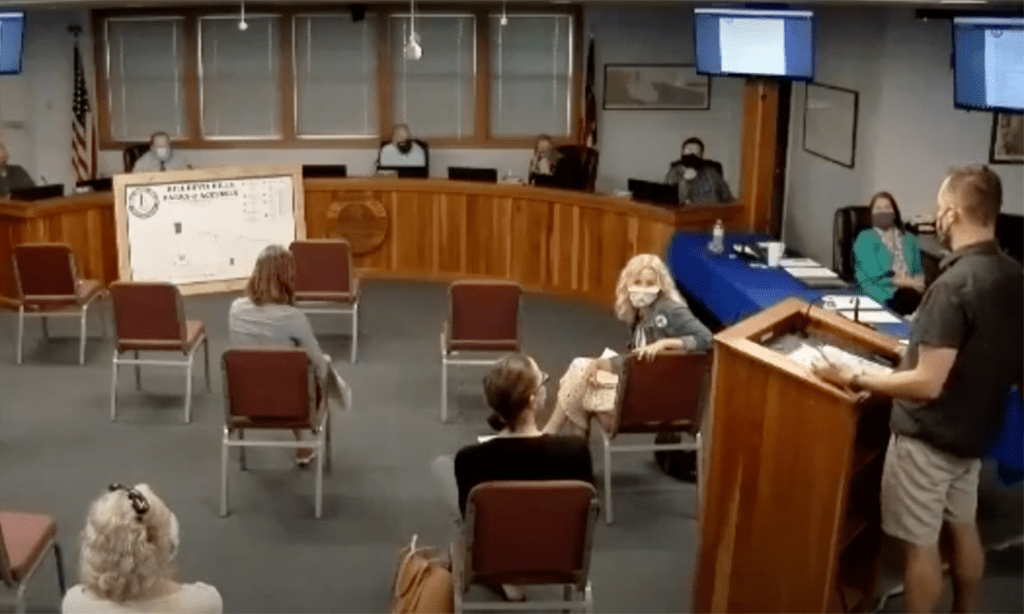 After a short regular meeting April 28, the Kill Devil Hills Board of Commissioners opened up public forum to hear from community members. “We are committed to getting citizen feedback,” said Mayor Ben Sproul. “We are not going to make any decisions tonight but . . . know that we’re hearing it, we’re giving it consideration. The government – we’re just your stewards up here trying to help be the conduit of what you want to see in your town . . . to help make the town something everyone can be proud of,” he said.

The commissioners and a handful of residents engaged in casual dialogue and questions, sharing ideas and plans the town has for improvements. One resident proposed adding amphitheater-type seating options along the dunes. According to the resident, a lot of people want to be near the ocean – perhaps to do a surf check or take a quick lunch – but don’t always have time to go out on the sand. He suggested that the town build seating along the beach access points to allow residents and visitors to enjoy the views. The commissioners responded enthusiastically, though they cited state regulations that may restrict building along the dunes. Sproul suggested putting together a recreational group to make an assessment. “That’s a really great idea that we’ll try to incorporate,” he said.

The public forum also discussed the Third Street sound access and plans already in the works to add a short pier for non-motorized vessels like paddleboats and kayaks. The town hopes to have the project completed by mid-summer. The group then moved on to a discussion about how to clearly communicate rules and information to the public and the general effectiveness of signage throughout the town. Other questions were raised about trash pickup, increased beach parking, how involved to be in the beautification of the bypass and beach accesses and ideas on how to extend the hours when the community can pick up mulch.

In official business, the commissioners approved a resolution opposing the North Carolina House Bill 401/Senate Bill 349. The bill, if passed, would require local government to allow duplexes, triplexes and quadplexes in areas that are currently zoned single-family, as well as require local governments to allow one accessory dwelling unit (ADU) per lot. Like many other towns on the Outer Banks, Kill Devil Hills is opposing the bill. A portion of the resolution reads:

“Now, therefore be it resolved, that the Kill Devil Hills Board of Commissioners opposes HB401/SB349, the Increasing Housing Opportunities Bill as proposed. The General Assembly is encouraged to directly engage with local and county governments to consider strategies that increase housing supply and affordability without compromising the authority and effectiveness of North Carolina’s local governments.”