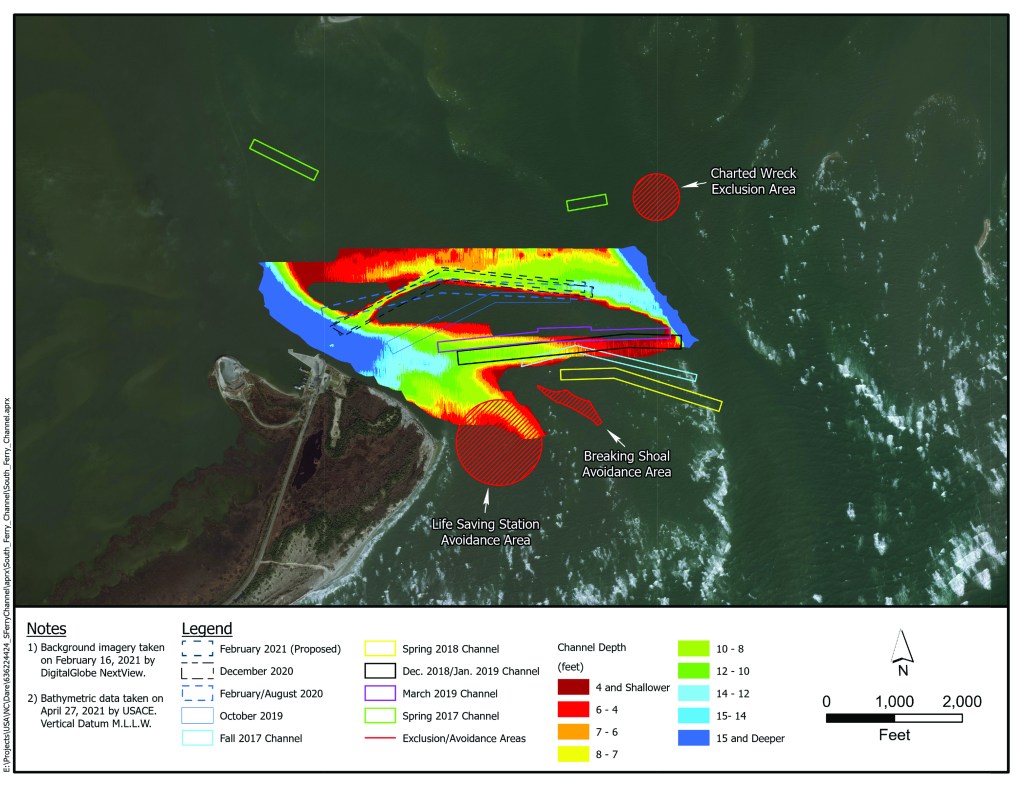 At this year’s Hatteras Village Offshore Open, some 29 boats participated in the first tournament of the 2021 Governor’s Cup, competing for a $157,080 purse.

All boats went out of Hatteras Inlet.

The South Ferry Channel is dredged. The U.S. Coast Guard Aids to Navigation Team placed buoys along the channel to mark the route.

Though the route in and out of the inlet is open, it’s not without problems. At the Dare County Waterways Commission meeting last Monday night, Chairman Steve Coulter said the newly dredged channel was getting narrower.

At the May 10 meeting, the commission pushed for exploring different routes, more natural flow paths through the inlet.

The commission requested that the U.S. Coast Guard survey two areas to the north as well as previously dredged routes.

The most recent Hatteras bar survey shows depths of 10 to 12 feet. Todd Horton with the U.S. Army Corps of Engineers said the bar has remained stable for the last six months.

For the foreseeable future in North Carolina waters, only the U.S. Army Corps’ sidecaster Merritt will be available for dredging.

For Sloop Channel, the state’s ferry division announced that dredging permits will likely be issued at the end of May. NCDOT also reported that a permit application for Stumpy Point was to be filed. Dredge material will be taken to a site in the U.S. Fish and Wildlife Service’s Alligator River refuge.

Two items from the Waterways Commission appeared on the Dare Board of Commissioners agenda for May 17.

The first was a request to the state’s Department of Environmental Quality Shallow Draft Grant fund to continued maintenance on the South Ferry Channel and to modify the dredging permit to allow the Ms. Katie, the state-private partnership dredge, to work in the channel. Engineering and construction services will be provided by Coastal Protection Engineering-NC. The request to the grant fund is for $36,600 with 75% provided by the fund and Dare County providing 25% or $9,150.

The second request was to add the Hatteras Bar to the Hatteras/Rollinson Federal Authorization.

At Oregon Inlet, NCDOT has requested that dredging stop at bent 25 or buoy 17 as the material directly flows to the area where contractors are taking down the old Bonner Bridge. The dredge can work in the area during flood tide.

The state’s Department of Labor has released the demolition work area where a death occurred. The Oregon Inlet Task Force will recommend placing a memorial to Jose Armando Maqueda Mejia at the almost-finished fishing pier. The pier is a remnant of the previous Bonner Bridge that spanned the inlet.

A feasibility study is proposed for the south side of Wanchese Harbor. The non-binding study would concentrate on thin layer placement for rebuilding the marsh. The U.S. Army Corps is involved in the project. The Task Force will send a request to Dare’s Board of Commissioners.

The Corps’ Merritt is now working in Oregon Inlet. For the first time in a long time, no dredging was conducted in Oregon Inlet during the month of April.