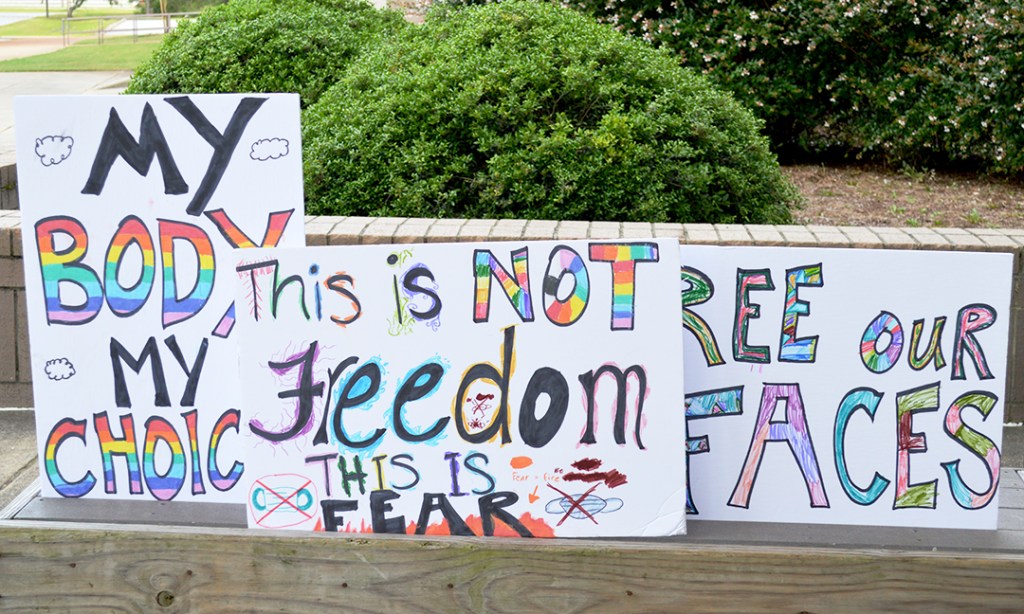 Signs voicing displeasure at the requirement that masks must be worn in schools were displayed outside First Flight High School after the Dare County Board of Education meeting on June 8. Mary Helen Goodloe-Murphy photo

On Tuesday evening, June 8, Dare County’s school board listened to nine speakers who wanted their children mask-free in Dare Schools.

“Because of the mask mandate, I pulled her out,” said Janelle Dolan, mother of a kindergarten student.

“When is someone or some school going to stand up and say ‘no more?’ Where is our freedom and liberty to make the decision for our children?” Melanie Brewer asked.

She refuted Superintendent John Farrelly, who said the matter is not local.

“What is more local than our children and public schools and parents right to decide this issue?” “It’s our choice; our children,” said Gina Elko, whose daughter attends Nags Head Elementary. “Fight with us on local level. What we want is to be able to make our decisions.”

“It’s not fair to him,” said Kati Morgan, who kindergartener is autistic and has a mask exemption. “He’s sad. He wants to see his friends’ faces.” And to the school board, “we expect you to be our voice.”

Bethany Doyle, whose children suffered physical problems from masks, predicted a mass exodus from public schools if an emphasis is placed on experimental injections.

Josh Saunders said “We should have choices.” He said, “You’re here to protect us. Let us make our own decisions.”

Aaron Saunders claimed the governor’s Executive Orders are unconstitutional and that the mask mandate for schools is turning teachers into enforcers and classmates into “snitches.” “Dare County should take a stance starting immediately that we support freedom of choice regarding masks and vaccines. Let’s be a leader in the state of North Carolina for freedom.”

Amy Scarborough, the final speaker, struggled to gain her composure as she told about an incident with her second grader. She and her son were riding bikes and passed his teacher, who said “hello” to him. Her son didn’t know her. She didn’t have a mask on. Her son said he recognized the voice as that of his teacher.

“This is crazy.” said Scarborough. “It makes me really sad . . . It’s not fair. It’s detrimental to their health.”

Speakers continually reminded the board that “you work for us.” Said another “you guys are supposed to be working for us . . .”

Superintendent John Farrelly addressed the issue at the end of his opening announcements before staff and student recognitions and instructional highlights. Public comment followed these two agenda items.

Farrelly said, “it’s not a local decision.”  He then read a summary of a recent state School Board where face coverings or masks were considered.

The summary states “the rationale behind still requiring masks in schools is that a majority of the school population is unvaccinated because vaccines have not been approved for younger children.”

A state school board member challenged the mask requirement in schools “when statistics show low infection, spread, and death rates in children.” When asked what metrics will be used to determine when masks are not needs in schools, “staff stated that they will be looking at all metrics . . .”

As of June 11, 2021, the CDC continues to recommend mask mandates in schools. Typically, the North Carolina Department of Health and Human Services follows CDC guidance and then sends it onto the counties.

According to Governor Roy Cooper’s Executive Order 215, “In public school units, as defined by N.C. Gen. Stat § l l 5C- 5(7a), and non-public schools covered by Article 39 of Chapter l l 5C of the General Statutes, the StrongSchoolsNC Public Health Toolkit (K-12) (“Toolkit”) sets any Face Covering requirements. As of the date of this Executive Order, the Toolkit currently requires Face Coverings indoors. Any future changes to the Face Covering requirement in schools will be issued in the Toolkit.”

Also, several speakers yoked masks and vaccinations. North Carolina House Bill 572 would prohibit requiring or mandating vaccination by executive order nor may an agency impose a mandate resulting in a disciplinary action as a condition for receiving, renewing or reinstating a license.

The bill passed the house 75-38 and was sent to the senate May 11. It was referred to the senate’s Committee on Rules and Operation.

Dare’s Board of Education also:

– Approved on second reading 10 policies and one regulation with an amendment to the Student Laptop User Agreement to allow fees to be waived or reduced.

– Approved an interim operating budget, since the state budget has yet to be determined.

The board also heard Farrelly address ESSER positions and the summer learning program. He declared that Dare County Schools is not interested in providing a virtual option next year as the option is prohibitively expensive.

Kelleta Govan, director of school nutrition, provided an update on the meals program, including this summer, when free meals will be provided for children 18 and under between 11:30 a.m. and 12:30 p.m. each weekday at various locations throughout the county.