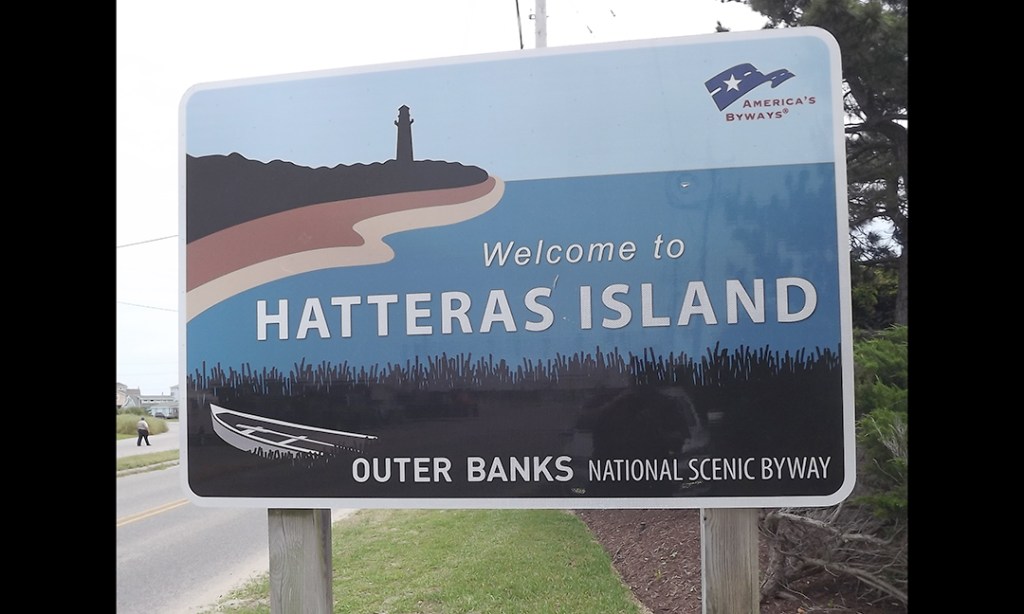 This Outer Banks National Scenic Byway sign still stands at the southern entrance to Hatteras Island. The same sign was stolen from the northern end of Hatteras Island last year. A sign welcoming motorists to the Outer Banks National Scenic Byway was recently stolen from its posts at the first pullout south of Whalebone Junction. C. Ricchuiti photo

The latest sign to be removed from its posts graced the first NC 12 pullout south of Whalebone Junction. That sign welcomed travelers to the Outer Banks. According to one visitor who had his dash camera on, the sign was missing as far back as May 31.

Last year, the sign at the south end of the Oregon Inlet Bridge went missing. That sign welcomed travelers to Hatteras Island. It was the only sign that told motorists they were on Hatteras Island.

Both signs are four feet by eight feet in size.

Prior to last year, three other smaller signs went missing. Two route signs marked the mid-way point between Salvo and Avon. Another one was in Rodanthe. The signs and their posts were taken.

On Ocracoke, one route sign that was close to the pony pens was stolen in the fall of 2020. In Down East Carteret County, several route signs have been stolen.

The wayshowing grant was followed with a 2012 Interpretive Grant to display history and cultural heritage of the 21 byway villages and the byway.

From 2013 through 2019, project participants gathered content and artwork for 18 byway kiosks and 21 individual community and village wayside interpretive exhibits now positioned throughout the three counties.

Through the years, the byway’s advisory committee has had representatives from Carteret, Hyde and Dare counties as well as state and federal partners.

The advisory committee worked extensively to develop the byway’s graphic design logo under the guidance of David L. Dahlquist Associates, LLC, and Breann Bye+Associates. That graphic design is displayed on the stolen signs.

Interpretive components were installed in 2020 with the project management and engineering team of Albemarle & Associates, Ltd. The interpretive signs highlight numerous historical, cultural and natural points of interest and village history, stories and recipes.

Replacements for the large missing signs have been secured and will be re-installed this summer.