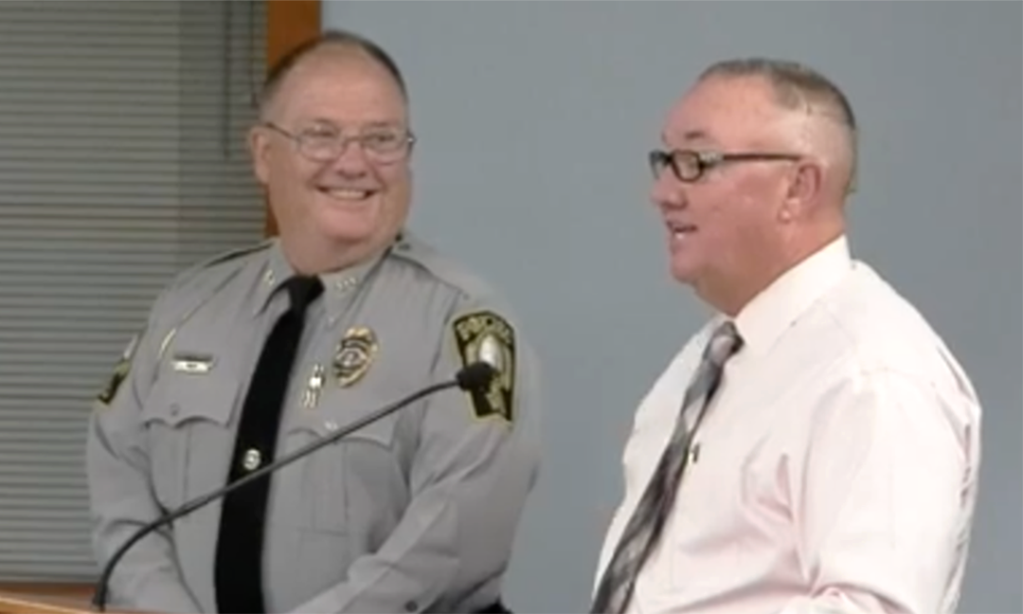 Kill Devil Hills commissioners meeting on June 23 opened with a presentation from Eagle Scout Damian Gregory, a senior at First Flight High School who led the project to replace 20 cigarette receptacles at beach accesses throughout the town, and closed with a surprise award for Assistant Police Chief Dana Harris.

Gregory and six other Boy Scouts worked with community members to assemble the receptacles and replace them. “We had an Eagle Scout who did this project three years ago. This is a continuation – a legacy – to his project. Most Eagle Scouts build a picnic table or bench and it’s a one and done. I thought a legacy project was a neat idea,” he continued. 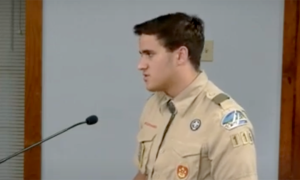 Next, commissioners approved the 2021-22 budget, which included a cost of living adjustment from 2.6% to 3.6%. “We are getting more done with the same amount of people. This is a way to say thank you,” said commissioner Terry Gray.

Assistant planning director Cameron Ray then gave a presentation about the possibility of installing benches in an amphitheater style along the beach accesses for residents and visitors who want to do a “surf check” or take a short lunch near the ocean without going down to sand. Ray followed up with the regulations from the North Carolina Division of Coastal Management (CAMA) and found that such seating could be allowed and would be classified as an “open deck.”

Ray and the town staff didn’t seem to be a fan of the seating, citing nine concerns including potential damage to dunes, additional burden to the maintenance department and costly upkeep. Said the memo: “Staff recommends the Town continue to maintain the existing shoreline facilities (Town Beach Accesses) with the intent of providing access to the oceanfront while affecting the dune system minimally.”

Commissioners agreed, however, said that they would like to see Kill Devil Hills show creativity in meeting community needs. Said commissioner BJ McAvoy: “We are in need in this town for something special. To be honest, I really like this plan. I’d like to see us continue to think outside the box. I think it would be well used by citizens.”

Commissioners and the Planning Board will seek opportunities to expand beach seating.

At the end of the meeting, Police Chief Gary Britt surprised Assistant Chief Dana Harris with a Veterans of Foreign Wars (VFW) Public Servant Award, given to individuals who have been recognized by their colleagues or those they serve, have shown consistent excellence in the performance of their duties and have shown consistent dedication to their official responsibilities over a period of years and continuous growth in responsibilities and skills within their profession.

“We had the privilege of nominating someone who is beyond deserving. He’s a legend in our profession,” said Britt.

McAvoy added spontaneously, “As a defense attorney for 17 years, I’ll tell you that Assistant Chief Dana Harris is one of the most loved police officers that I’ve known – amongst attorneys, amongst judges, even people that he arrests. He certainly is a professional, but just loved by everyone. And deserves that award and many others . . . everybody loves this guy. Everybody.”