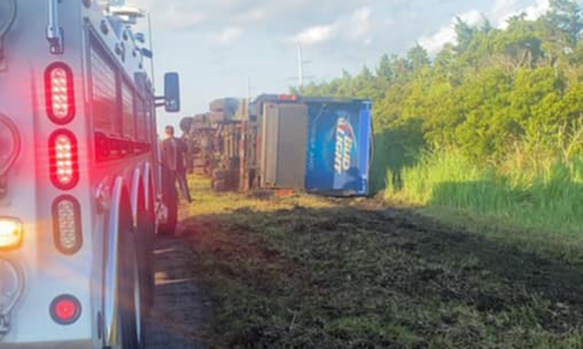 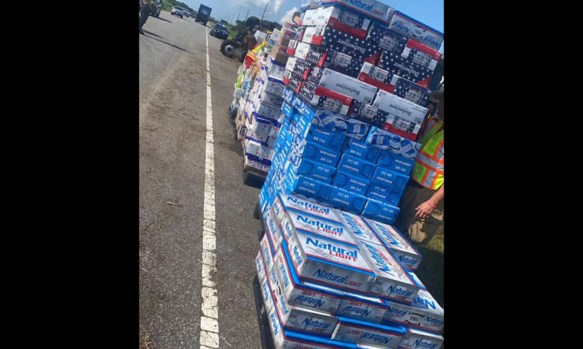 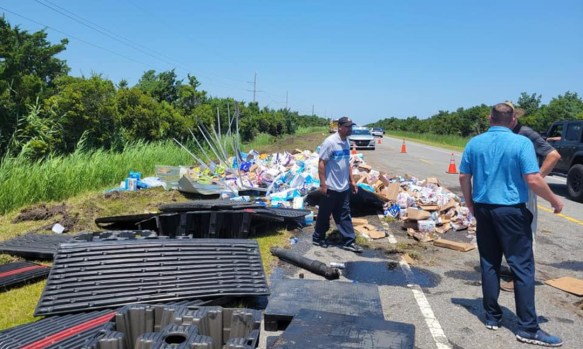 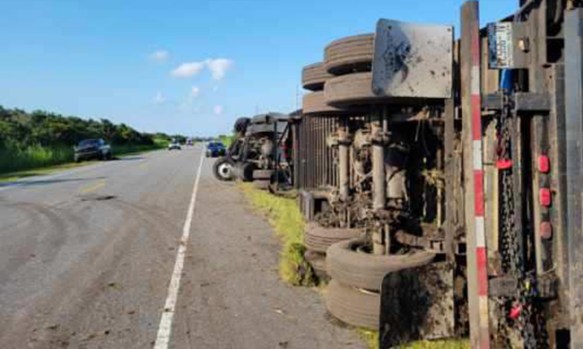 Frank Hopkins answered the call. He’s the assistant fire chief in the Avon Volunteer Fire Department. He had no idea he would be spending 12 or so hours in volunteer service to Avon and Hatteras Island. He and others in the department had just spent the evening of July 4 on the Avon Pier minding fireworks.

A City Beverage Co., Inc. tractor-trailer running south had overturned just north of Ramp 34 outside Avon. The trailer was loaded with 1,500 cases of craft beers, ciders and Anheuser-Busch beers.

Throughout the incident, the responders tried to keep both lanes of traffic flowing. Sometimes it was both lanes, other times just the northbound lane and at the end, no lanes.

So a line was formed with volunteer firefighters, City Beverage employees, Seto’s workers and the sheriff’s deputy. The team off-loaded about two thirds – or 1,000 cases – of the beer to the highway right-of-way.

Another City Beverage truck arrived to collect the off-loaded beer. A traffic lane was closed for this maneuver.

The beer remaining in the trailer shifted. The trailer’s roof and one side busted open, spilling the rest of the beer into the NC 12 travel lanes, blocking the road.

Hopkins called Dare Emergency Management for a bobcat and a dump truck to get the beer-y mess cleaned up from the road.

Oxendine said the driver fell asleep at the wheel. The driver, Anthony Serruzzo, 34, initially said he was okay, but about an hour later, he was transported to The Outer Banks Hospital. He has a broken rib and bruises, reports Steve Sutton with City Beverage.

Serruzzo left Elizabeth City around 2:30 a.m. and was headed for the Avon Food Lion. He almost made it.

Sutton praised the Avon firefighters for unloading the trailer. He said the firefighters were “an awesome bunch of guys.”

“It was a great effort by everybody,” said Hopkins.