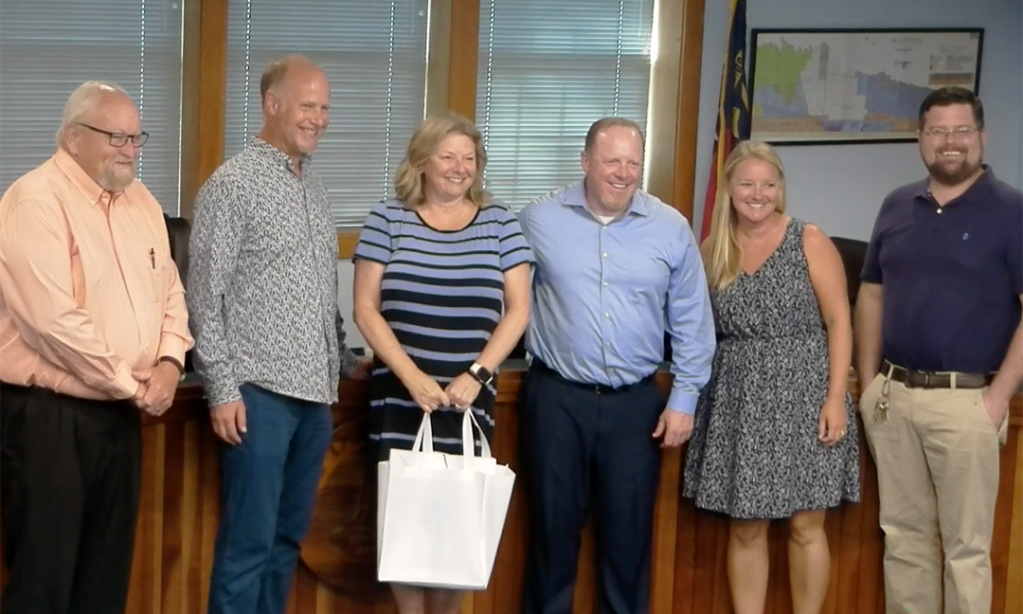 Kill Devil Hills commissioners met for a brief meeting last Monday to recognize Jerry Froelich and James “Chip” and Colleen Almoney for their service to the town.

Mayor Ben Sproul gave a speech in honor of Jerry Froehlich: “There are a few times in the life of a town when someone makes a long-lasting imprint and an indelible mark on the community. This evening we honor one of those rare individuals.”

Over his many years of service to the Town of Kill Devil Hills, Froelich has served on the planning board, the street improvement special projects committee and has been a longtime member of the firefighter relief fund board. He and his wife Gail have been members of the fire auxiliary for over 20 years. Froelich was an integral part of creating Trash Attack, a community clean up event, and he has been involved in the town’s bulk trash pick-up program.

Upon receiving a gift from the town, Froelich said, “It’s been privilege to serve the town and I’m only one of the probably thousands of people because they’re here and they’ve done things for many, many years.” 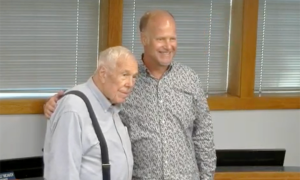 Mayor Ben Sproul honors Jerry Froelich for his many years of service to the town. Kill Devil Hills meeting screenshot

Next, the mayor thanked James “Chip” and Colleen Almoney for their dedicated years of service. Chip has been a longtime member of the planning board and Colleen served on the dangerous animal appeals board, as well as established the community watch program. “They have been tireless advocates to the town,” Sproul said. “As they transition their new lives to Maryland they go with the knowledge they will be greatly missed and their service to our community will not be forgotten.”

After receiving handshakes and hugs from the commissioners, Colleen accepted a gift on behalf of herself and her husband and gave a short speech, tearing up at times as she shared her experience of trying to bring about changes in the town. “We got to know the staff of this town intimately…You guys did it, you made big changes really, really fast and I am just thrilled we could have been a part of it. The time that I spent serving the town of Kill Devil Hills is something that I’m really proud of. And it’s hard to leave because I really do feel like you guys are all family. So thank you so much for all that you do and your willingness to serve.”

Commissioners then made an appointment to the Historic Landmarks Commission and heard a short report from Sue Kelly representing the community appearance committee. The committee welcomes suggestions for the community appearance award given to the best businesses (including churches) and most improved business. The award is based on exterior architecture (how well the style fits the beach community), harmony, landscaping, lighting, general maintenance, how easy it is to get in and out, parking and amenities.

During the mayor’s agenda portion of the meeting, the board approved a resolution to receive federal funds under the American Rescue Plan Act.

The meeting ended with a reminder to attend First Flight Market, which began Tuesday, July 20 from 10 a.m. to 2 p.m. and runs until the end of August.