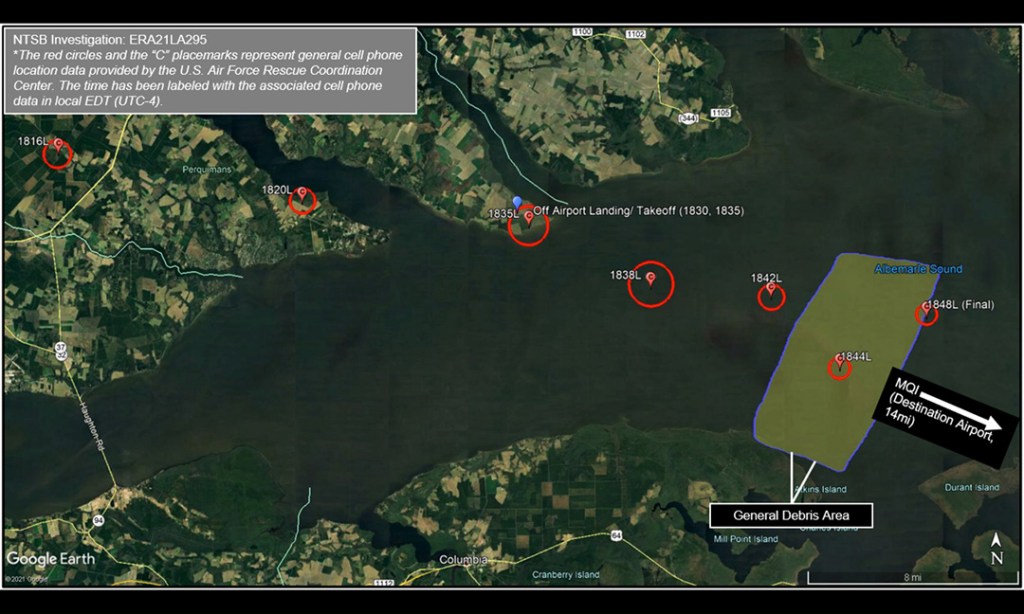 Before a helicopter crashed in the Albemarle Sound last month, killing two Virginia men, it was seen landing in a field and taking off again, according to the National Transportation Safety Board’s preliminary report.

The Robinson Helicopter R44 II was destroyed July 19 when it crashed in the Albemarle Sound near Point Harbor, killing the pilot and passenger, the NTSB said. Local officials identified them as brothers Alan and John Arant.

About an hour later, a witness in Hertford, North Carolina reported seeing a helicopter land in a field about a half-mile from the shoreline and drove over to see if they needed help, the NTSB said. The helicopter took off when the witness was about 50 feet (15.24 meters) away. The witness reported that the takeoff was quick and the helicopter sounded normal as it flew southeast toward the Albemarle Sound. It was overcast and misty, and the land across the sound that’s visible on a “nice day” could not be seen, she said.

More than an hour later, the U.S. Coast Guard was notified that the helicopter hadn’t arrived at its destination and began a search in the sound based on data from the brothers’ phones.

During the course of the multi-agency search, debris from the helicopter was discovered near the mouth of the Alligator River.

On Thursday, July 22, the unified command of the United States Coast Guard, Tyrrell County Sheriff’s Office, North Carolina Wildlife, the North Carolina Marine Patrol and the US Fish & Wildlife, along with North Carolina Emergency Management was notified that one of the occupants from the aircraft was located in the Albemarle Sound, stated the Tyrrell County Sheriff’s Office. Responders recovered the body of John Arant, 35, of Virginia. Shortly afterwards, the body of his brother, Alan Arant, 36, of Virginia, who was the pilot of the aircraft, was also located.

Review of weather radar data imagery about the time of the crash revealed areas of widespread light to heavy precipitation.

The NTSB releases a preliminary report soon after a crash with facts about an incident, but the final report with a probable cause is usually issued 12 to 24 months later.