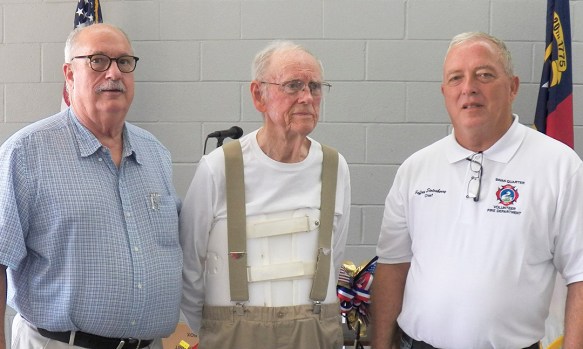 In its 50 years of existence, the Swan Quarter Volunteer Fire Department has had only three fire chiefs; all were present at the open house. Shown, from left, are Roger Paxton, second fire chief; Hiatt Cahoon, first fire chief; and current Fire Chief Jeffrey Stotesberry. Courtesy SQVFD 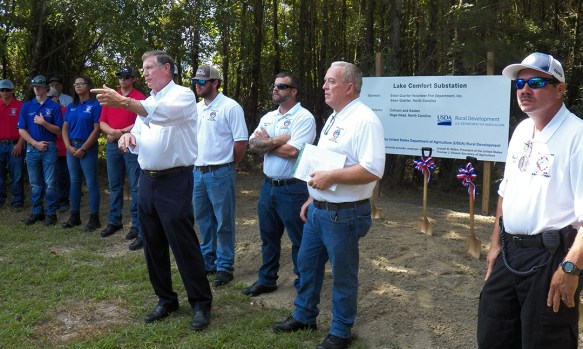 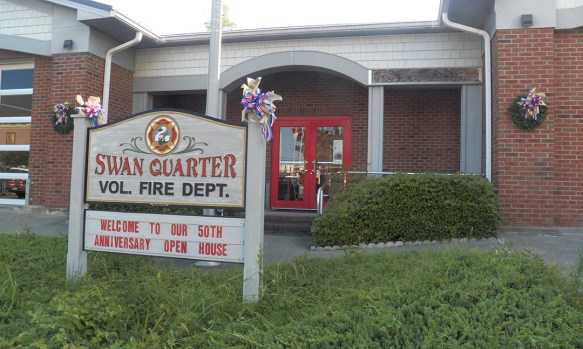 This sign greeted guests as they arrived at the open house at the current fire station in Swan Quarter. Courtesy SQVFD 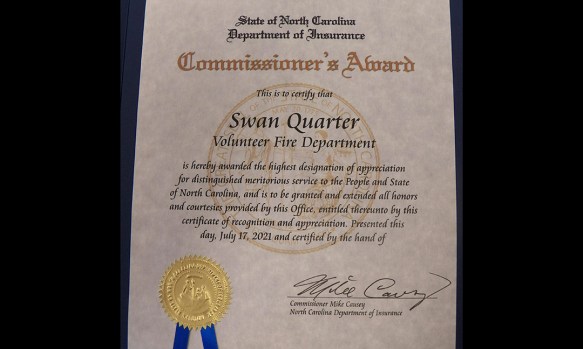 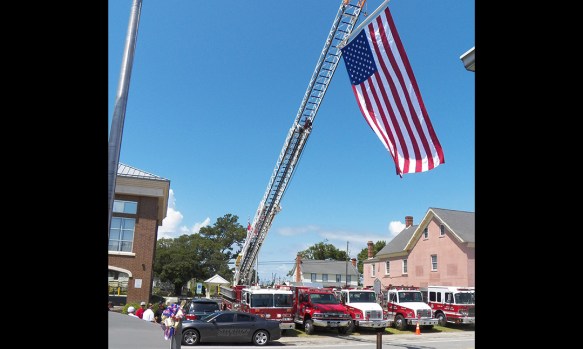 The Swan Quarter Volunteer Fire Department had their vehicles and equipment on display as Old Glory, flying from the ladder truck, greeted guests at the 50th Anniversary Open House in Swan Quarter. Courtesy SQVFD

The past and the future of the Swan Quarter Volunteer Fire Department were celebrated on July 17, 2021 with dual events held at different locations.

A groundbreaking for SQVFD’s new Lake Comfort Substation was held in the morning. Funded by USDA-Rural Development, the $1 million project is expected to be completed by late 2022.

A 5,086 square-foot fire station will be built on a 1.07 acre site near the intersection of US 264 and NC 94 in a Hyde County area known as Lake Comfort. The land for the substation site was donated to the SQVFD by the Earl Pugh Jr. family.

Once the new building is complete and has been certified and rated by the North Carolina Office of the State Fire Marshal, both home and business owners in the area will experience a reduction in their property insurance.

Approximately 200 homes with 400 occupants and 22 businesses in the Lake Comfort area will also benefit from a reduction in response time should they experience a fire or other emergency. This area includes the Mattamuskeet School Campus, Mattamuskeet National Wildlife offices and housing, as well as three churches.

In the afternoon of the same day as the groundbreaking, the SQVFD hosted an open house at their Swan Quarter facility with various dignitaries present to mark their 50th anniversary. The department was incorporated by the State of North Carolina on July 1, 1971.

Earlier in 1971, a group of concerned Hyde County citizens and members of the Mattamuskeet Jaycees had met to establish an organized fire safety presence in this rural NC fishing village. At that meeting, 13 volunteers from throughout Hyde County stepped forward to offer their time and effort toward that goal.

It took several years and a lot of creative fundraising, but in 1973 the station house was completed. Several pieces of used equipment had been procured and the SQVFD was officially up and running.

Since then, the department has been in continuous operation. From the days that fish fry fundraisers were held on the dirt floor of the first building and through its renovations and expansion in 2004 to the current well-appointed building, the mission of those charter members and subsequent volunteer firefighters has not waivered. In fact, along the way, their duties expanded beyond fire suppression to include first responder services for medical emergencies.

Three of the original charter members were present to mark the 50th anniversary of the organization in the very same building they helped to build all those many years ago. It is highly doubtful that those forward-thinking men envisioned what the ensuing years would bring for the department.

The SQVFD has had only three fire chiefs in its history and all were present to mark the occasion. Hiatt Cahoon served as chief from 1971-1987. Roger Paxton served from 1987-1989 and Jeffrey Stotesberry, the current chief, has served since then.