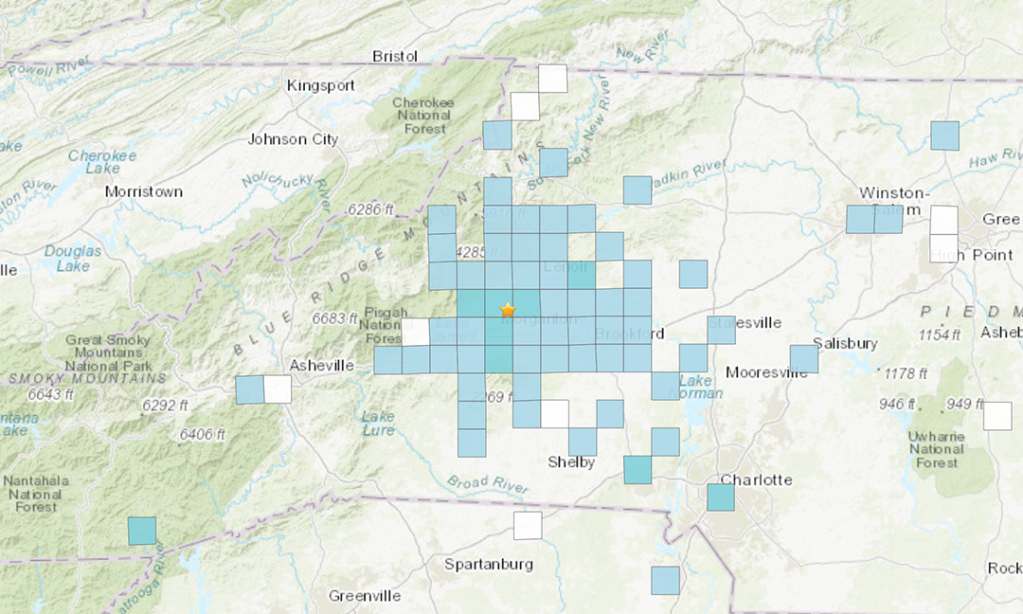 A magnitude 2.7 earthquake rattled parts of western North Carolina on Tuesday, August 17, 2021 and was felt in parts of Tennessee and Kentucky as well, according to the U.S. Geological Survey.

The USGS website reports the earthquake occurred around 9:20 a.m. and was centered nearly four miles (6 km) north of Morganton, which is 76 miles (122 km) northwest of Charlotte.

According to the USGS, the earthquake registered a 1.7 magnitude near Sparta, where a 5.1 magnitude earthquake caused damage one year ago. It also registered in multiple locations in Tennessee, including a 2.2 in the Knoxville, Tennessee, area and a 2.1 near Cawood, Kentucky.

Capt. Jason Whisnant with the Morganton Department of Public Safety said there were no reports of damage during the first hour after the earthquake, The News Herald of Morganton reported. There was no word on whether anyone was injured and emergency management officials couldn’t be reached for comment Tuesday afternoon.

According to the USGS, moderately damaging earthquakes strike the inland Carolinas every few decades. Smaller earthquakes are felt about once each year or two.

Affordable housing for Dare may be on the horizon; Hanig calls proposal ‘a game changer’