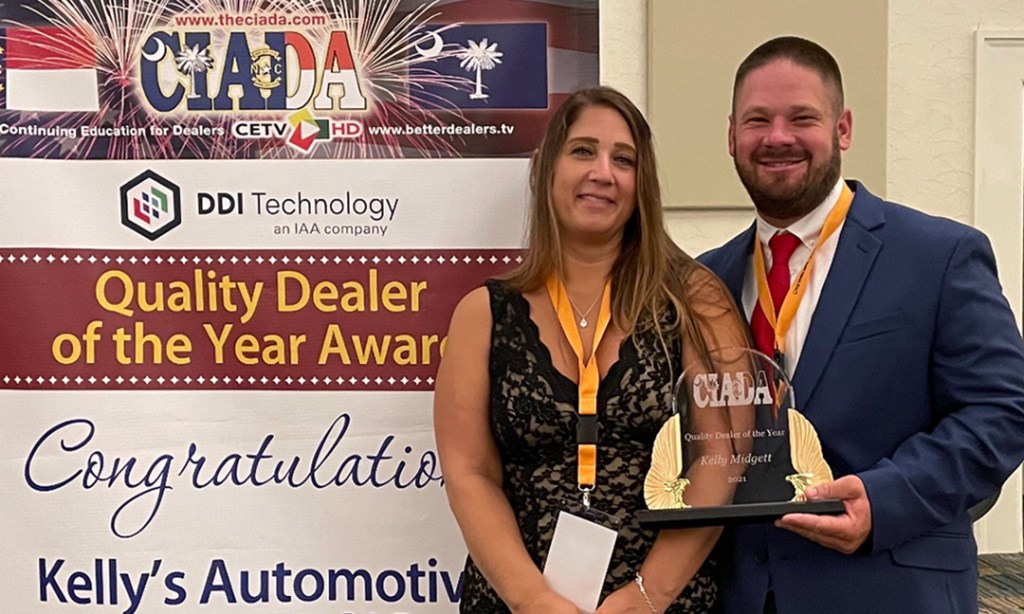 Jessie and Kelly Midgett attended the CIADA annual convention, where Kelly was recognized as Quality Dealer of the Year for 2021. Courtesy photo

The CIADA is the only non-profit organization in North and South Carolina that represented independent used car dealers. The organization serves both the dealer and vendor and hosts a convention annually for members of the program.

Midgett, whose parents are from Roanoke Island, grew up around the Charlotte/Lake Norman area and has spent most of his life detailing cars. “I cleaned cars and worked at the big box dealerships detailing cars out in Charlotte,” Midgett said.

After moving back to the Outer Banks in 2006, Midgett decided it was time to open his own shop, but needed the funds to do so. “I wanted a shop but couldn’t afford it just by detailing,” he told The Coastland Times. “I told myself I needed to sell one car a month and that would help cover my rent.” In 2010, Midgett opened his shop and things “snowballed” into what Kelly’s Automotive is today.

“It was a big honor,” Midgett said in response to receiving the CIADA award. Normally, there is an application process that goes along with the award. Midgett explained that someone involved with the association nominated him. With little time left before applications closed, Midgett quickly got everything together while someone who was involved with the association called and walked Midgett through what needed to happen.

Thousands of dealers span the landscapes of North and South Carolina. The CIADA looks to those dealers that embody quality, excellence in customer service and the drive to serve their community while making it a better place for everyone to live within. “Just to join the ranks of the folks who have won is the past is a huge honor,” said Midgett. “There are a lot of really great car dealers who have been in this position.”

Midgett and his family attended the four night CIADA convention in Myrtle Beach from August 5 through August 8 and on that Saturday evening, all attendees gathered for the awards dinner.  Midgett said as the speaker was reading about the winner of the Quality Dealer of the Year award, it dawned on him that they were talking about Kelly’s Automotive. “I thought ‘holy smokes – that sounds like me,’” he chuckled. Midgett’s wife, Jessie Hancock Midgett, said “I am so super proud of him.”

As the award recipient, Midgett will attend several CIADA meetings throughout the year to represent the association. There are mandatory requirements involved, such as attending the NIADA meeting conference, which takes place once a year as the representative for North and South Carolina. This particular meeting will take place in June of 2022 in Las Vegas. “I will go up against all the other states and they will choose a national dealer recipient,” Midgett explained. To prepare, Midgett plans on attending the 2021 convention taking place in Texas.