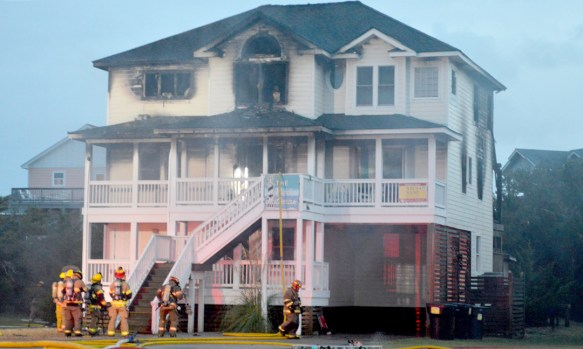 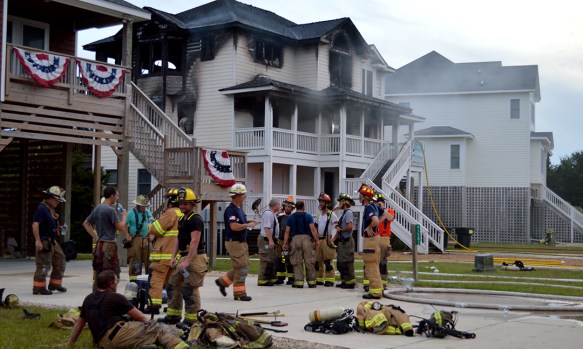 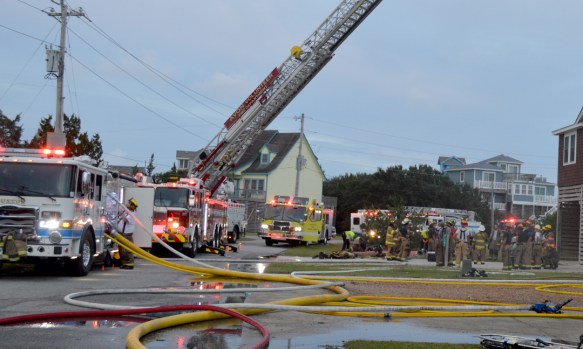 Just after 5 p.m. on Wednesday, Sept. 22, 2021, the first call from dispatch went out to Avon, Buxton and Frisco firefighters. Minutes later, a second call brought Hatteras firefighters and a ladder truck.

A house was on fire in Kinnakeet Shores Soundside in Avon.

As soon as the hydrant supply was established, two crews went inside to search for people and fight fire. But the fire was too hot and Buxton Fire Chief Carroll Midgett pulled the crews out. Flames were doused from outside. Again, two crews when in. The fire was stopped,

The house still smoldered as at least 22 volunteer firefighters, some soot covered, rested.

Eventually, new crews were sent into the smoldering structure. Then, smoke coming from the house stopped.

Over two and a half hours after that first call, crews started gathering hose and air packs to head back to stations. Avon volunteers were still on the scene at 11 p.m.

Lisa Godfrey from Chesterfield, Va., and her 91-year old mother had just returned from a mid-week trip to Nags Head. It was her mother’s first vacation in six years. Godfrey had rented the same Kinnakeet Shores Soundside house for three years through Surf or Sound Realty.

Godfrey, who is retired from the U.S. Army, brought three show boxers with her. She was able to get the dogs out of the house. A realty company representative was on scene and arrangements were made for overnight.

“The teamwork was just tremendous,” said Dare County Fire Marshal Steve Kovacs, who responded to the scene. Volunteers from four stations worked together to put out the fire. The houses beside the fire appeared undamaged.

Kovacs is returning to the fire scene Thursday morning.