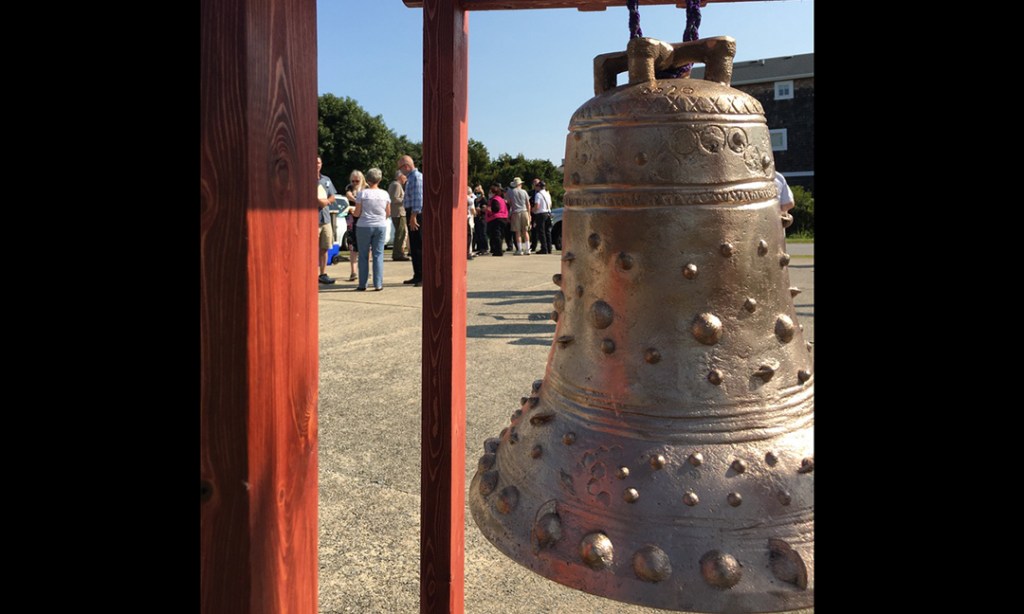 In the shadow of the 15’ tall 9-11 Memorial sculpture created by noted North Carolina artist Hanna Jubran, people gathered on Saturday, September 11 in remembrance.

“I created the memorial to commemorate victims of the September 11 terrorist attacks on the World Trade Center, Pentagon and Somerset County, Pennsylvania, 20 years ago – one of the saddest moments in our history,” said Jubran.  “With this memorial, I am honoring those who were lost and families and loved one who grieve the losses and as a tribute to heroic first responders.”

By placing the memorial at Glenn Eure’s Ghost Fleet Gallery, the artist hopes to reach out to visitors to the Outer Banks from across the country and other countries. He would like it to be a place that encourages reflection and a promise to never forget, as well as a message to teach new generations about liberty, freedom and honoring our democracy, stated a press release from the Nags Head gallery. 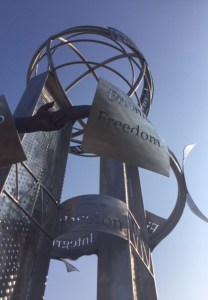 Four speakers opened the remembrance ceremony, each giving information about one of the four attacks and reciting words from people in the towers or Pentagon or passengers in Somerset County, Pa. Speakers – reading from engraved bronze medallions affixed to the memorial structure – included Jubran and his wife Jodi, Nags Head Mayor Ben Cahoon and Pat Eure from the gallery.  After each recitation, a bell cast by Jubran rang four times. “Our own community’s first responders, Nags Head Fire, Police, and EMS personnel as well as Manns Harbor Fire Department, were welcomed and received our gratitude,” stated the gallery’s release.

Audience members were then invited to speak of their own experiences of September 11, 2001. Those who shared included a paramedic who responded at the Pentagon, a woman who lived and worked near the World Trade Center and experienced the turmoil, another awaiting his train in Pennsylvania on his way to NYC and a young Manns Harbor firefighter who was not born then, but was from a family of firemen and who read the Firefighters Prayer and introduced a woman from their unit who played the bagpipes.

“The most moving moment for me,” says Pat Eure, “was when I heard Marie, who lived and worked near the World Trade Center and lost friends, thank Hanna Jubran for creating the memorial. She felt that being at this memorial 20 years later enabled her to do something for those friends.”

People continue to stop by to study the memorial, reflect on the symbolism of the stainless steel towers structure with holes for the missing, the clasped bronze hands, the stainless sheets with cutout words placed as if floating down, the world globe atop.