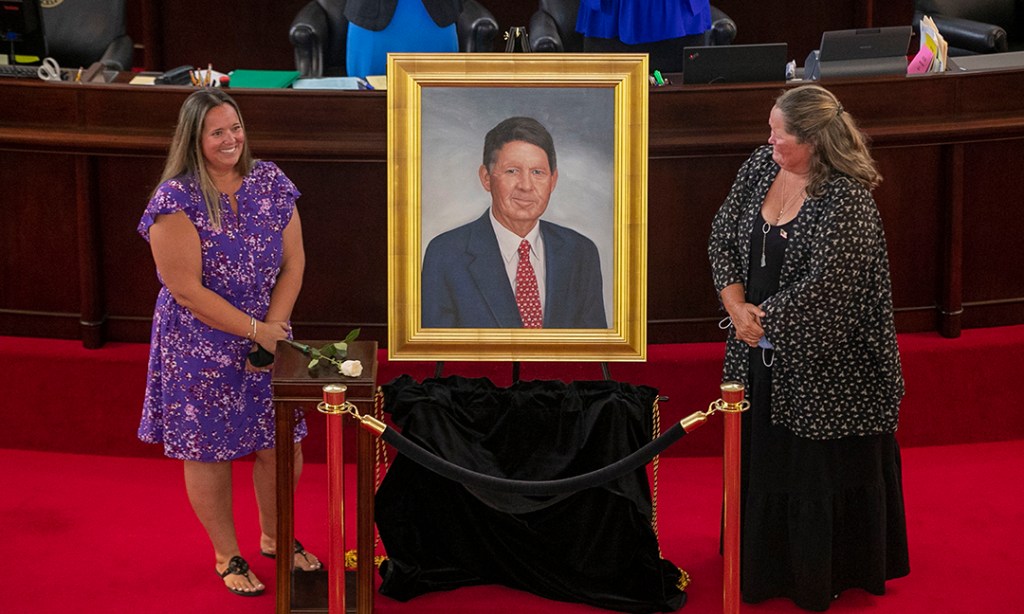 Former colleagues of the late Senate leader Marc Basnight gathered Tuesday to remember his lasting contributions to North Carolina and to view a portrait of the Outer Banks Democrat that will hang in the chamber.

Gov. Roy Cooper, former Lt. Gov. Walter Dalton and at least 30 other ex-senators who served with Basnight sat on the floor while the current Senate passed a formal resolution honoring his life. Basnight, whose service as Senate president pro tempore made him the longest-serving head of a legislative body in North Carolina history, died in December at age 73.

Basnight influenced nearly every major legislative achievement of the 1990s and 2000s, including passage of a state lottery, a ban on smoking in restaurants and bars, and funding improvements for higher education, the environment and cancer treatment. Colleagues who spoke remembered Basnight for his knack for listening to people, often during his weekly road trips between Manteo and Raleigh, and understanding their needs and aspirations.

“Marc came from humble beginnings to become one of the most influential political figures in our state’s history,” said Sen. Don Davis, a Democrat and one of three current senators who served in the legislature alongside Basnight. All three spoke Tuesday. “His life was about people — the people of North Carolina.”

Basnight joined the Senate in 1985 and within eight years was the chamber’s leader, keeping the post through 2010, when Republicans took over the chamber for the first time in 140 years.

He resigned his Senate seat in early 2011, announcing his decision weeks before GOP Sen. Phil Berger was elected by the chamber to succeed him as Senate leader. Basnight told reporters at the time that he was already struggling with a degenerative nerve disease later diagnosed as amyotrophic lateral sclerosis.

Although just a high school graduate, Basnight was among the legislature’s top boosters of the University of North Carolina system, seeing it as a tool to help the state transition from textiles and tobacco to a high-tech economy.

“Marc was instrument al in leading our state into the 21st century,” said Senate Minority Leader Dan Blue, who was also House speaker in the early 1990s.

Berger said while he and others suffered political defeats at the hands of Basnight, they weren’t personal. That’s one reason why Tuesday’s gathering had the feel of a class reunion, as senators from both parties and former Basnight aides shook hands and hugged.

“We don’t often get an opportunity to come together like this,” Berger said during a speech. “You see, that’s one of things that Marc always had an ability to do, and that is bring people together. And I will say that he’s doing it again today with this ceremony and this resolution.”

Basnight’s two daughters were escorted to the well of the Senate for the unveiling of the portrait, which was painted by a Berger aide.

“It is fitting that his portrait hang in this chamber, so that people now and in to the future will have the opportunity to ask, ‘Who was that? What did he do?'” Berger said.