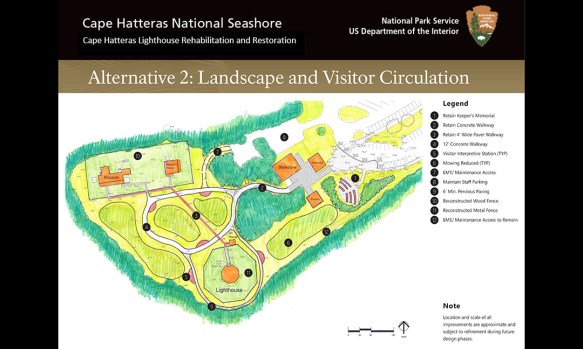 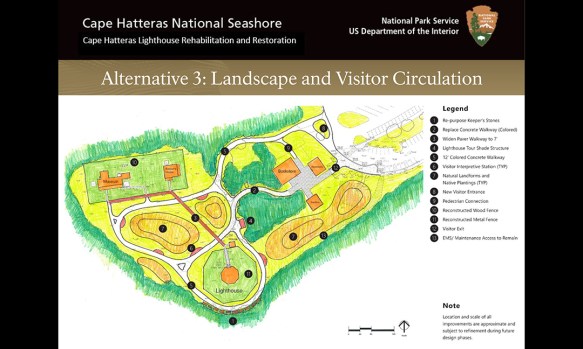 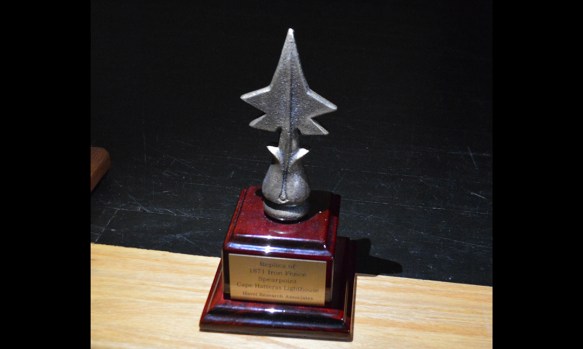 This is what the top of the historic metal fence looked like in 1871. Both Alternatives B and C call for restoring the metal fence around the lighthouse. A wooden fence would be reconstructed around the Double Keepers’ Quarters and Principal Keeper’s Quarters. Mary Helen Goodloe-Murphy photo 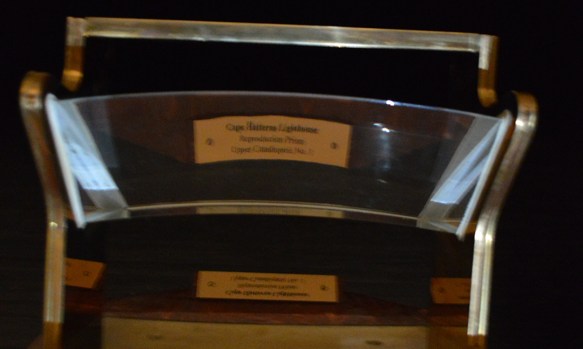 A reproduced Fresnel lens prism was displayed by John Havel, an acknowledged expert on the Cape Hatteras Lighthouse. Havel, with Havel Research Associates, reported at the in-person meeting that “less than 300 of the original 1,008 precision-ground glass prisms” are displayed in the partially restored Fresnel lens and pedestal displayed at the Graveyard of the Atlantic Museum. He said another 40 to 50 are in storage because “the bronze frames designed to hold them are too bent out of shape to fit them in, or because the prisms were received too late for the restoration work.” Mary Helen Goodloe-Murphy photo 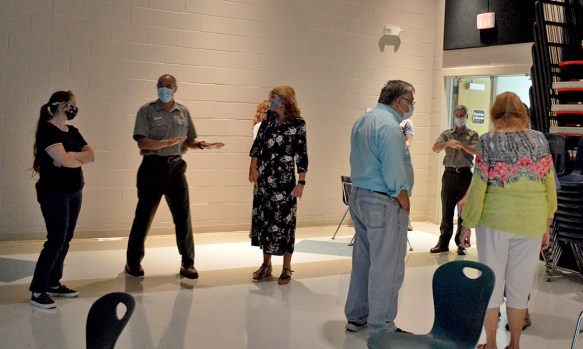 Citizens and National Park Service staff gather for an in-person presentation about the Rehabilitation and Restoration of the Cape Hatteras Lighthouse. The meeting was held in the auditorium of the Cape Hatteras Secondary School on Tuesday, Sept. 28, 2021. Mary Helen Goodloe-Murphy photo

Two lightly attended meetings spelled out the alternatives under consideration for restoration and rehabilitation of the Cape Hatteras Lighthouse.

Comments and questions, which were encouraged at the two meetings, have an Oct. 17 deadline.

Hallac showed graphic rusting on metal work in the famed lighthouse. Replacing metal work damage will be repaired with fabricated replacements. Interior paint has been removed only to show mysterious repairs. Some seven to nine layers of paint – much with lead – were removed from the interior. Masonry has cracks. Marble flooring is cracked.

Non-sympathetic improvements like the shade awning over the oil house, rusting grates on windows for safety and a modern door on the oil house will be removed.

The two alternatives have differences. Hallac called the B alternative “good” and the C alternative “even better.” For both, the historic period for restoration is 1870 to 1936.

Differences between the alternatives are:

For the Fresnel lens, Alternative B would build a replica. Alternative C would install the existing historic artifact now in the Graveyard of the Atlantic Museum.

At the in-person meeting, John Havel, with Havel Research Associates, objected to installing the “168-year old extraordinary invention of precision optics and machinery that is the only known and surviving first-order Fresnel lens of the first two purchased and brought to America.”

In his prepared remarks, Havel said “It deserves to be respected and given as much care as we can provide for future North Carolinians, Americans and lighthouse enthusiasts from around the world.”

Havel reported that over 40 replicas of the Fresnel lens have been installed in lighthouses, he thinks, without upkeep being needed. He said “check it out.”

Joe Schwarzer, director of North Carolina’s Maritime Museums, said about the Fresnel lens, “if it moves to the Cape Hatteras site, that’s fine; if it stays at the museum, that’s fine.” He encouraged the park service to make a decision “in the near future.”

The National Park Service is still working on the cost figures to restore the lens, Hallac said in response to a question. “It will be expensive.”

Another difference concerns the keeper stones now arranged in an amphitheater at the lighthouse site.

At the virtual meeting, 10 expert panelists attended and 16 people attended. At the in-person meeting, more than 10 people showed up, including national seashore staff.