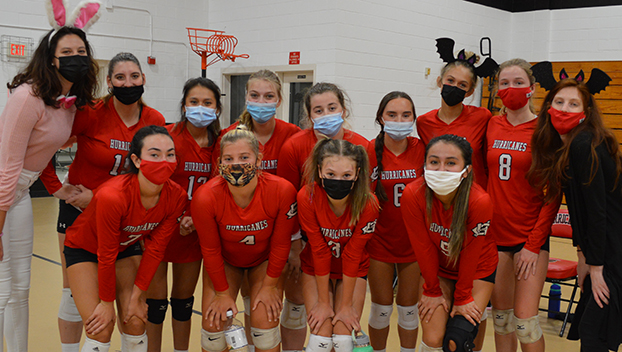 The Lady Hurricanes are scheduled to play in the first round of the North Carolina High School Athletic Association’s playoffs Saturday, Oct. 23 at 4 p.m. in the Buxton campus gymnasium.

The conference championship match was the third time these two teams faced each other this season. In the first two matches, Cape Hatteras won in three sets.

This time, Bear Grass won the first set 25-17, with a six-point scoring run by junior Madi Hall and the final points by senior Shelby Craddock.

In the second set, Bear Grass seized an early 10-6 lead and maintained that lead until the second serving round. Cape Hatteras tied the score at 19 and on Grace Shoemaker’s serves ran the score to 24-19. Bear Grass faulted for the set-winning 25th point.

In the fourth set, the score was tied four times. Bear Grass grabbed the lead at 12-8. But Cape Hatteras junior Molly Hanburger served nine times, while teammate Lilly Ratliff spiked the ball once and earned another two points on returns. At the end of the run, the score was 18-12.

Cape Hatteras had match point at 24-15 when Bear Grass’ Emily Perry served up points to bring the score to 24-20 and a Bear Grass fault.

Ocracoke is seeded 30th and faces Northside (Pinetown), which is seeded third.

In the 2A playoffs, Camden is seeded at the top, No. 1. Manteo is seeded at No. 18 and plays Southwest Edgecombe at No. 15 in the first round.