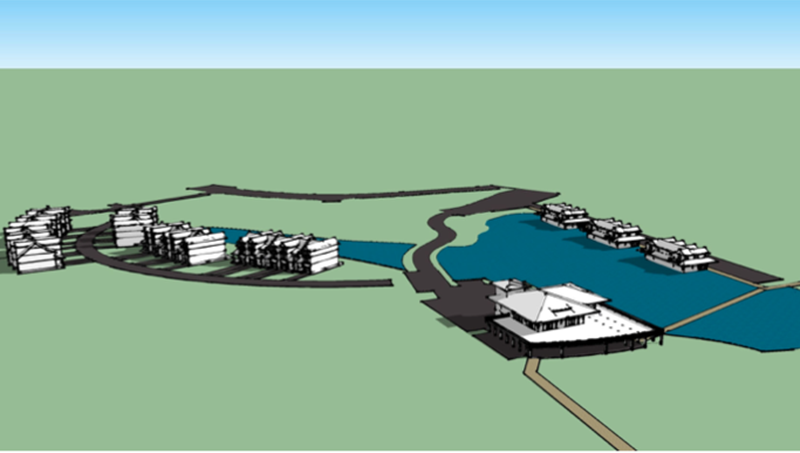 Pine Island requested to convert the upper half of its two-unit cabana into a two-bedroom apartment. Both units were originally planned for storage, but due to housing shortages, the applicant requested the amendment to provide housing for its managers. The board was assured that the appearance and the footprint of the cabana will not change and the lot will continue to be owned by the developer. Commissioner Bob White made a motion for approval; it was accepted unanimously.

Next, Monteray Shores, located adjacent to Malia Drive behind Corolla Adventure Golf, presented its request for an amended sketch plan to add 36 residential dwelling units, reduce open space by 4 acres and reallocate 1.2 acres of existing commercial space. Of the 36 units, there would be 5 single family homes, 25 townhomes and six upper story units. The developer plans to add a restaurant with an outdoor entertainment deck and venue and three retail buildings over the pond. A 10-slip boat basin is planned for use by residents and visitors, as well as an option to rent paddle boats.

Commissioners and community members raised concern over the lack of parking in the commercial spaces in an area of Corolla that already struggles with adequate parking. A business owner in the Timbuck II shopping center said, “It is a very nice sounding project. It’s someplace I’d want to go visit myself, but based on the letters I get on Facebook . . . the number one—the number one—complaint is there’s no place to park the car.”

Attorney John Morrison, representing Monteray Shores, reminded commissioners that what was up for approval was simply the amended sketch plan; permits and NCDOT approval would come at a later date. Morrison also made a strong case for the continued need for housing in Corolla due to explosive growth, citing home price statistics in the last 10 years. The six upper story units, he said, will provide necessary employee housing.

The request was approved unanimously.

During commissioner reports, Kevin McCord announced the Christmas parade set for December 3. “It’s a great event. We usually have 1000 people,” he said.

According to commissioner Kitty Etheridge, PayPal donations will now be accepted for the county’s Operation Santa program, which provides toys for needy children in Currituck. “It’s a wonderful way to make sure someone has a merry Christmas.”

Chairman Mike Payment encouraged community involvement through participation in an advisory board. There are openings in the veteran’s board and the fire advisory board. “It’s the best way to get involved in the county,” he said. Interested persons can call the clerk to the board or go online for more information.

White shared findings from the economic symposium he attended including a wind-powered project located 25 miles offshore named Kitty Hawk. Though the project’s completion is several years off, its impact to the community will be significant.

Commissioner Selina Jarvis reported information from the juvenile crime and prevention meeting she attended, specifically mentioning the “alarming rise” human sex trafficking among young girls. According to Jarvis, North Carolina is ranked 11th in the country for sex trafficking.

Blackbeard’s Pirate Jamboree on Ocracoke set for Friday and…