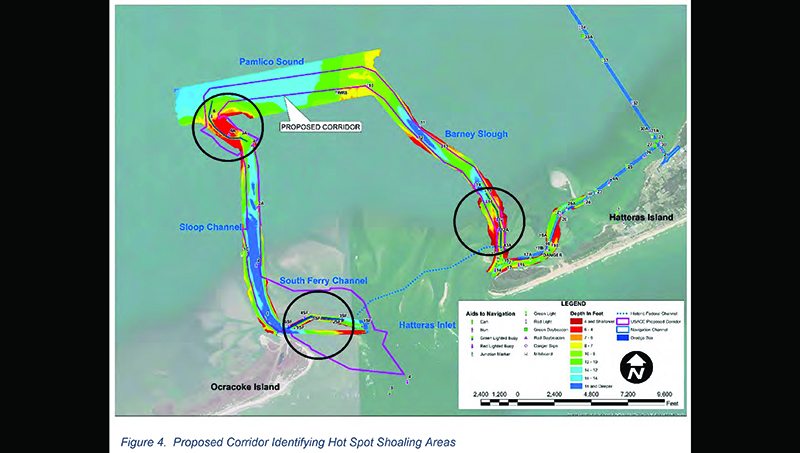 The Environmental Assessment acknowledges that shoaling in Hatteras Inlet has made it impossible to maintain the historic route, which was straight across a much smaller inlet.

In 1993, Hatteras Inlet was about one-third of a mile wide; now that distance has increased to over two miles.

The proposal is to abandon the historic route and make the horseshoe route in use since 2013 the official route.

The Environmental Assessment has three alternatives. The always occurring No Action alternative and two other alternatives focusing on following natural deep water.

The document states that the horseshoe route is the only route the Corps of Engineers can “economically maintain.”

The Environmental Assessment says The No Action Alternative “is not a viable option. It was carried forward for comparison purposes in the detailed analysis . . .”

For this alternative, the Corps would pursue maintaining the historical route, which has had Corps work starting in the 1960s.

However, the assessment says “the historical route is not currently navigable and re-establishing it would require a dual effort of sidecast dredging and commercial pipeline dredging almost continuously since it is a high shoaling area.” Over a 10-year period, the constant dredging is expected to cost $60 million in sidecast dredging alone.

The Environmental Assessment labels this alternative “Proposed Action” with the title “Maintenance of the horseshoe route any time of the year.”

This alternative would have the Corps monitoring shoals with routine surveys and planning scheduled maintenance events.

Alternative 3 responds to the current application of the dredging window. “The current practice of declaring emergencies after shoals have become a problem and then coordinating with agencies has proven to be burdensome, time consuming and inefficient.”

Conditions of dredging would be established.

Several disposal areas are identified, including NCDOT bird islands, Cora June and off the ocean beach of Hatteras Island. When a pipeline dredge is used, the dredging would take place during the 1 October to 31 March window.

This alternative is titled “Maintenance of the horseshoe route between 1 October and 31 March (with agency approval required for dredging between 1 April and 30 September).

Using only the six month window “is not practical given the dynamic nature of the inlet and high shoaling rates,” states the Environmental Assessment.

The public can submit comments on a preferred option, or on any aspect of the draft Environmental Assessment, via an email to Emily.B.Hughes@usace.army.mil.