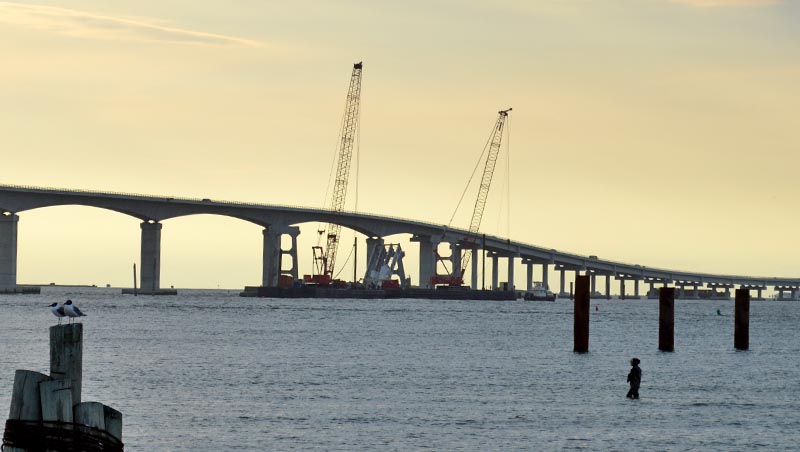 The site of the Bonner Bridge demolition project on April 14, 2021 after the collapse. Mary Helen Goodloe-Murphy file photo

A federal workplace safety investigation found that established procedures were ignored, causing a 42-year-old welder on the Bonner Bridge to fall more than 50 feet to his death when the structure collapsed on April 14, states a media release from the U.S. Department of Labor.

Employed by PCL Civil Constructors Inc., the worker was torch-cutting crossbeams on a section of the bridge where the company discarded concrete for removal. The concrete’s weight caused the structure to collapse and the welder to fall, reports the media release.

Jose Armando Maqueda Mejia, 42, of Manns Harbor died when the section he was standing on collapsed.

PCL Civil Constructors is the lead contractor for the project, which includes dismantling sections of the bridge built in 1963.

The U.S. Department of Labor’s Occupational Safety and Health Administration cited PCL Civil Constructors with two serious violations for failure to use engineering surveys or calculations to control the structure’s stability and avoid unplanned collapses, states the October 15, 2021 release.

“PCL Civil Constructors violated federal safety standards and a worker needlessly died as a result,” said OSHA area director Kimberley Morton in Raleigh. “If they had followed well-known standards, this tragic loss of life could have been prevented.”

Under the Occupational Safety and Health Act of 1970, employers are responsible for providing safe and healthful workplaces for their employees. OSHA’s role is to ensure these conditions for America’s workers by setting and enforcing standards and providing training, education and assistance.