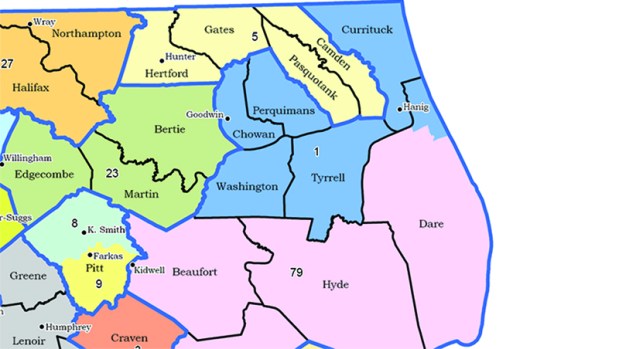 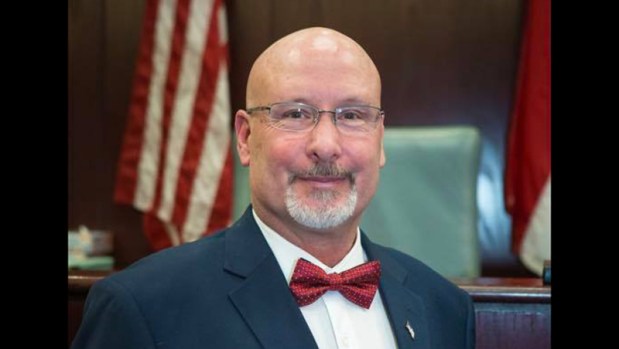 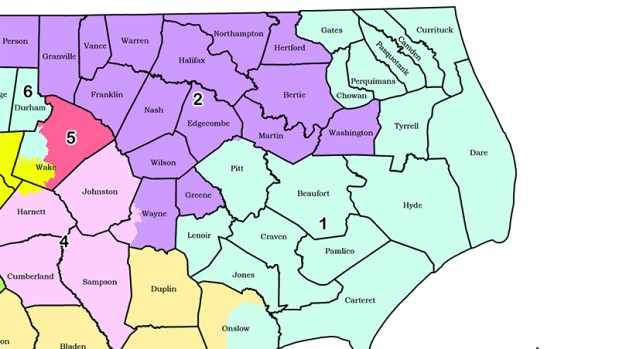 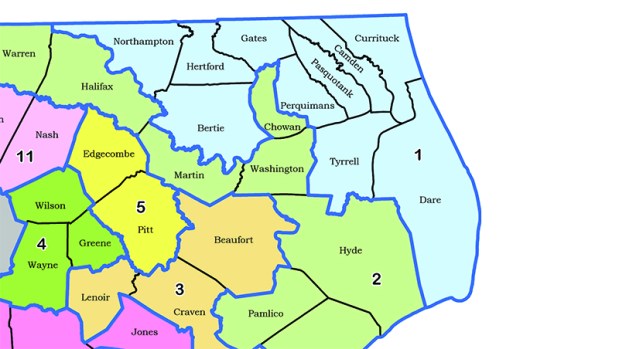 The adopted map for representatives for the North Carolina House splits Dare County.

The plan for the North Carolina Senate creates a district for the northeastern corner of the state. Included in Senate District 1 are all of the following counties: Bertie, Camden, Currituck, Dare, Gates, Hertford, Northampton, Pasquotank, Perquimans and Tyrrell.

In his media release, Hanig is described as “a conservative Republican business-owner serving his second term in the General Assembly . . .”

The incumbent in this district is Ernestine Bazemore, a Democrat from Aulander in Bertie County. She is in her first term.

The incumbent in this district is Rep. Keith Kidwell, a Republican from Chocowinity in Beaufort County.

On Friday, Oct. 29, 2021, Robert L. Woodard Sr., chairman of the Dare County Board of Commissioners, sent a letter to State Rep. Destin Hall, who chairs the North Carolina House Standing Committee on Redistricting.

Woodard characterized the legislation as splitting Dare County in half and wrote “we strongly object to that plan and hope that it is not the one finally adopted.” He further wrote “. . . the division of our county as proposed makes it much more difficult, and frankly undermines our efforts over the years to create an engaged and collective ‘one county’ that we have worked so hard to achieve.”

Kill Devil Hills Mayor Ben Sproul also sent a letter objecting to the division of his town. He opposed the plan which would lead to “tremendous vote confusion at the polls.”

Wrote Sproul, “such a redistricting plan could jeopardize decades of local intergovernmental cooperation.” The letter is dated Nov. 3, 2021.

About the split Hanig said, “I tried as hard as I could, but could not get it to work out. I went to every avenue possible.”

Hanig praised the incumbent in the new house district. “Keith Kidwell is a great representative.” Hanig called the presumed 2022 Republican slate of Hanig, Goodwin and Kidwell, “a great contingent in office.”

Incumbents in this district are Bob Steinburg, a Republican from Edenton in Chowan County, and Republican Norman W. Sanderson, from Minnesott Beach in Pamlico County. Steinburg has confirmed that he intends to run to retain his state Senate seat in the new district. Sanderson could not be reached.

Republican Greg Murphy from Greenville is the current congressman.

On Oct. 29, 2021, a lawsuit was filed in Wake County by Southern Coalition for Social Justice on behalf of North Carolina NAACP, Common Cause and four voters. The lawsuit is styled NC NAACP v. Berger, No. 21CV014476.

The legal action was filed before the Nov. 4 General Assembly vote to approve redistricting legislation and maps. The lawsuit filing, which also included a Motion for Preliminary Injunction, alleges that the General Assembly failed to adequately consider racial data.

The 2022 timeline is tight. Candidate filing is scheduled for Dec. 6 through 17, 2021. In the past, the General Assembly has argued that the opening of the filing period precludes judicial review of the voting districts.