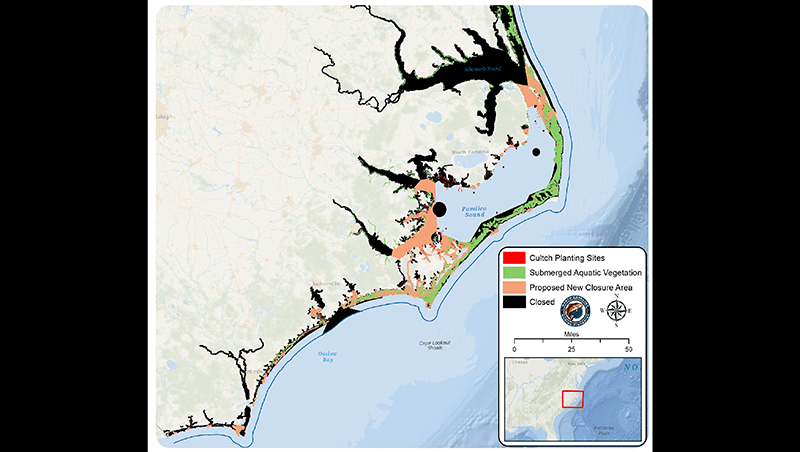 The state’s Marine Fisheries Commission takes up Amendment 2 to the management plan at its quarterly business meeting the afternoon of Nov. 18. The commission is meeting at the Islander Hotel in Emerald Isle.

At the Nov. 18 meeting, the commission is to vote on preferred management options and vote to send the draft plan forward for departmental and legislative review. The amendment is scheduled for adoption in February 2022.

Commissioner Ervin Bateman told the Dare board he uses 30,000 pounds of shrimp yearly in his restaurant. He called the amendment “economically devastating.”

Commissioner Steve House leads the board on fisheries issues and presented the resolution, which was read by county manager Robert L. Outten. The resolution was adopted on a unanimous vote. The proposed new closure area surrounds Roanoke Island.

Another resolution was also adopted unanimously, but without commissioner comment. The resolution recognizes and proclaims Jan. 23-29, 2022 as Dare County School Choice Week and calls “this observance to the attention of all Dare citizens.”

The first of two planning amendments passed without comment and added virtual and off-site check-in and management services to the definition of hotel and motel. The amended zoning requirement was written in 2002. Richard Fertig made the request.

The second text amendment is from OT Enterprises LLC, which owns the long-vacant movie theater at Hatteras Island Plaza in Avon. The request asks to amend the multifamily dwelling density of the R-3 district and the C-2 district regulations that apply to commercial group developments that existed prior to 1992. The Plaza was built in 1988. Use-specific zoning was adopted in 1992 for Avon. The plans are to tear down the theater and build multi-family housing at an increased density.

Speaking from Buxton, Pat Barto raised questions about parking, about where children play and where dogs are walked and commented that negotiating the parking lot is “going to be a little exciting.”

Planning director Donna Creef said that questions about parking, for example, will be addressed during site plan review. The building will be standalone and 20 to 24 units are talked about.

The vote to approve the amendment was adopted 5-0, with Woodard recusing himself.