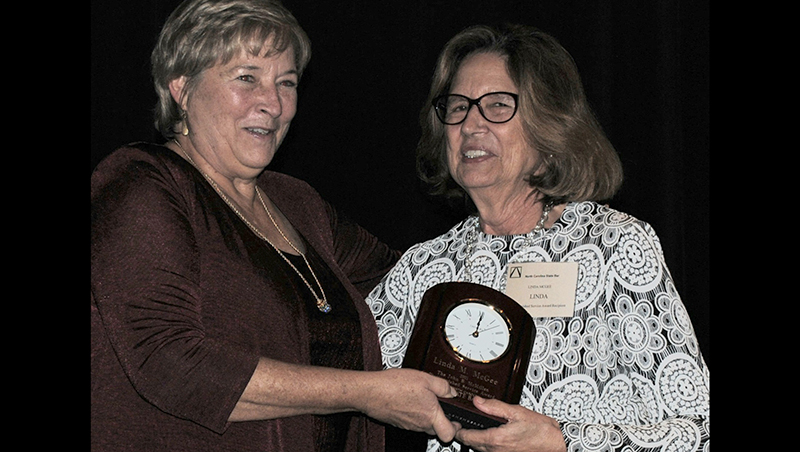 Retired NC Court of Appeals Chief Judge Linda McGee of Corolla received the John B. McMillan Distinguished Service Award for exemplary service to the legal profession during the fall meeting of the NC State Bar Council in Raleigh. The award was presented by State Bar President Barbara R. Christy during the State Bar Councilor’s Dinner attended by councilors from across the state.

McGee received her undergraduate and law degrees from the University of North Carolina at Chapel Hill. She served as the first executive director of the NC Academy of Trial Lawyers (now NC Advocates for Justice) from 1973 to 1978. She practiced law in Boone for more than 17 years in the law firm of Di Santi, Watson and McGee, where she led several community organizations, including serving as the first woman president of the Watauga County and the 24th Judicial District Bar Associations. She was a founding member of OASIS, Inc., which is dedicated to serving those affected by family violence, and was a leader of the League of Women Voters, Boone Federation of Business and Professional Women and AAUW.

McGee was appointed to the NC Court of Appeals in 1995 by Gov. Jim Hunt. She ran three statewide races and was elected in 1996 to an eight-year term and re-elected in 2004 and 2012. As a result, McGee is the longest-serving judge in the history of the Court of Appeals, having served 26 years, until her retirement at the end of 2020. In 2014, she was named chief judge of the Court of Appeals, where she led the court, oversaw its administration, served on the State Judicial Council and served as vice chair of the Chief Justice’s Commission on Professionalism, in addition to fulfilling her judicial role. Beginning in 2016, she helped form and chaired the Celebrate NC Courts Committee, which was responsible for planning and presenting the anniversary celebrations for each level of North Carolina’s court system, including leading the celebration of the 50th Anniversary of the Court of Appeals in 2017 and promoting the Judicial Branch Speakers Bureau. In 2019, Chief Justice Cheri Beasley presented her the Friend of the Court Award for these leadership roles. 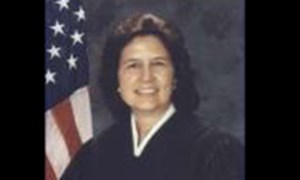 McGee has also served in leadership positions in numerous professional organizations, including most recently the NC State Bar’s Board of Continuing Legal Education, along with the IOLTA Board, and the NC Board of Law Examiners. She is a former member of the NC Equal Access to Justice Commission, Legal Services of NC Board, the NC Bar Association Board of Governors and is a founding member of the NC Association of Women Attorneys, where she helped form its Judicial Division, which she currently chairs. McGee is the recipient of the Order of the Long Leaf Pine, NC Bar Association’s Liberty Bell Award, the Judge of the Year Award from NCAWA, the Outstanding Appellate Judge Award from the NC Advocates for Justice and the ABOTA Award. She has also been a frequent CLE speaker for bar organizations across the state.