Southern Shores disbands library committee, sends signage amendments back to the planning board 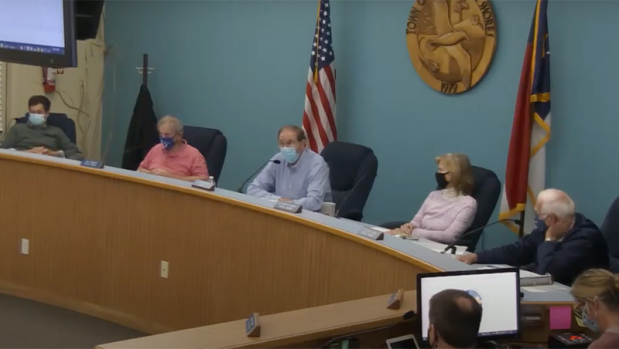 Southern Shores council members voted to disband the library committee after Dare County has made it clear it will not be funding a northern branch library. Southern Shores meeting screenshot 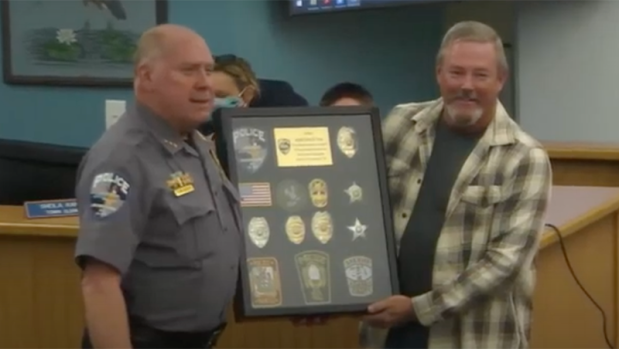 Police Chief David Kole presents Sergeant George Farrow with framed badges from the agencies and departments where he has served upon his retirement from Southern Shores. Southern Shores meeting screenshot 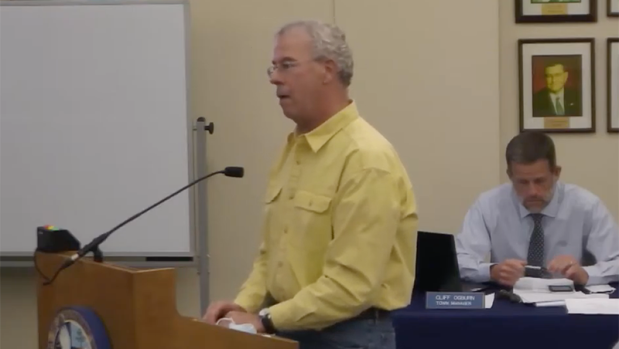 Andy Ward, planning board chairman, agrees that the proposed signage ordinance needs to return to the planning board to get reworked. Southern Shores meeting screenshot 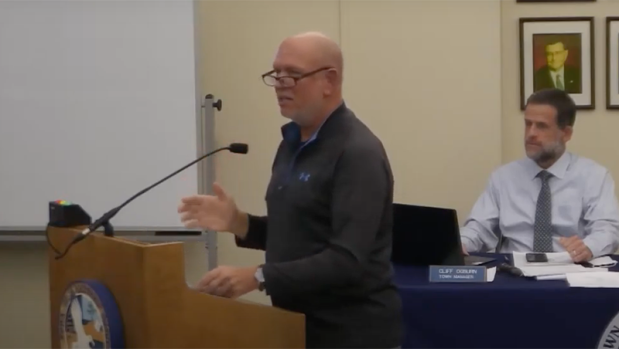 Real estate agent John Leatherwood expresses his concern to the town council about the suggested size reduction for signs and what it will mean for his business. Southern Shores meeting screenshot

Southern Shores Town Council members voted to disband the citizens advisory exploratory committee for the potential library branch in Southern Shores after Dare County made it clear that they would not be funding the project.

The committee was formed at the request of the council to research community interest and logistics of having a north branch. The committee successfully met their goals and the council members agreed that their work was completed. Council member Jim Connors said, “The library committee has done a tremendous job. It’s very frustrating to me that the county has taken the position that they’ve taken but that does not take away from the efforts of every member of that library committee.”

Mayor Tom Bennett said, “I’m sincerely sorry we couldn’t get the county to get more involved and try to work with the committee or with us but they’re just claiming, I think legitimately, they’ve overcommitted themselves for things they think are more important like fire stations and EMS facilities and so forth.”

There are three options for a library in Southern Shores moving forward: a change of mind from Dare County commissioners, which library committee member Michael Fletcher admitted was unlikely; a decision by the Town of Southern Shores to adopt the project, though council member Matt Neal said the town does not have the funds to support a library; or a citizen-run library made possible through grants and volunteering efforts, which seems to be the only option at this point.

Next, deputy town manager Wes Haskett shared the planning board’s recommendations for updating sign regulations, which he said are mostly a result of a U.S. Supreme Court ruling that signage requirements should be content neutral. Signs cannot be referred to based on content, for example commercial, charity event or real estate. The amendment would also reduce the size of temporary, free standing signs in residential districts, as well as require that all temporary signs be at least 15 feet from the edges of pavement. Finally, there would be a 90-day maximum for temporary signs.

“We realize this draft isn’t perfect,” Haskett said, and requested feedback from the council rather than a motion for approval.

Community members had concerns about the new regulations. Resident Tricia Farinholt took issue with the requirement that signs be 15 feet or more from the pavement. “I don’t see anyone from Southern Shores coming to mow my lawn the first 25-30 feet. I don’t see him picking up sticks, I don’t see him raking, so if I would like to put up a sign for one of the lovely people who were running for town council I think I should be able to do so.”

Long-time resident John Leatherwood, who has been in the real estate business since 1985, shared his thoughts about the new size requirements for signs, from 5 square feet down to 3.5 square feet. “The difficulty of a smaller sign is just visibility,” said Leatherwood, citing also the problem of the new setback rules with trees, bushes, mailboxes, etc. “There’s got to be a little bit of a marriage there as far as being able to be in business, have something be able to be seen . . . I can tell you right now in my garage I’ve got about $3000 worth of signs and according to the way this would be written, all of those would be non-conforming to the Town of Southern Shores and I’ve got to spend another x dollars to create new signs,” he said.

A representative from the Outer Banks Association of Realtors raised the issue of the 90-day maximum for temporary signs. “What if a home doesn’t sell in 90 days?” he asked.

Andy Ward, chairman of the planning board, addressed residents’ concerns. “I am well aware of these two gentlemen’s angst, and I can pretty much say that we mis-stepped when we switched it from 5 to . . . 3.5, and I think it needs to be back at 5 personally to make their life easier and not go back to spending extra money on signs. So hopefully as a council you will kick this back to the planning board for another little round of discussion. I think maybe we were a little burnt out at three different looks at this ZTA and we were ready to get some new eyes on it, which would be you, but I’m certainly willing as the chairman to bring this back before my group and discuss it more.”

Additionally, Police Chief David Kole recognized Sergeant George Farrow upon his retirement from the department and presented him with framed badges from all the police departments he’s worked for. “All I can tell you is that we miss you already. But we appreciate your service. And I know you’re happy, I can see you smiling behind your mask,” said Kole.

After serving in the Air Force, Farrow started his law enforcement career in 1996 as a jailer with Dare County Detention Center. He has also served in Manteo, Dare County Sherriff’s Office and Kill Devil Hills. “He was certified by the FBI school of crisis negotiation and I can tell you that he had two very well done talk downs for a couple of suicidal situations . . . and because of his expertise and patience he was able to resolve both of those issues and we truly appreciate that,” Kole continued.