Festivities abound at The Christmas Stop 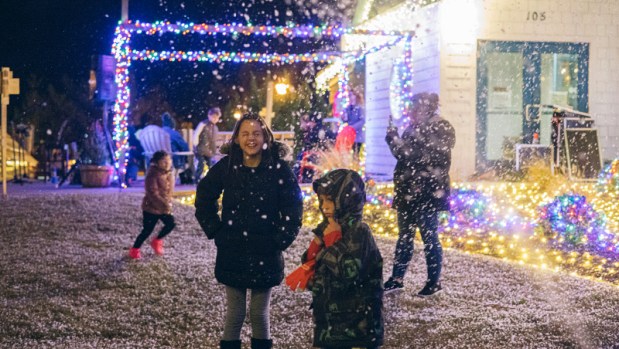 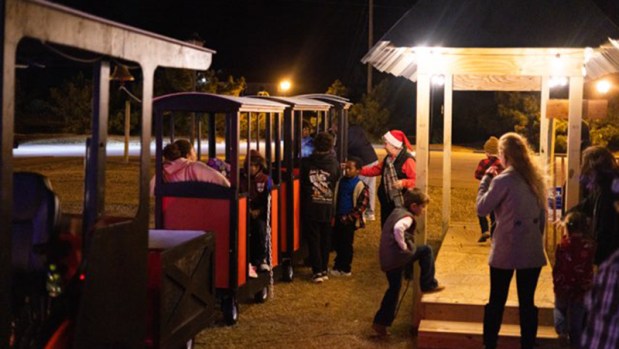 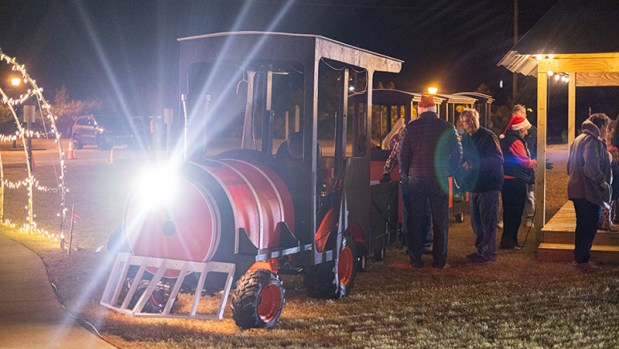 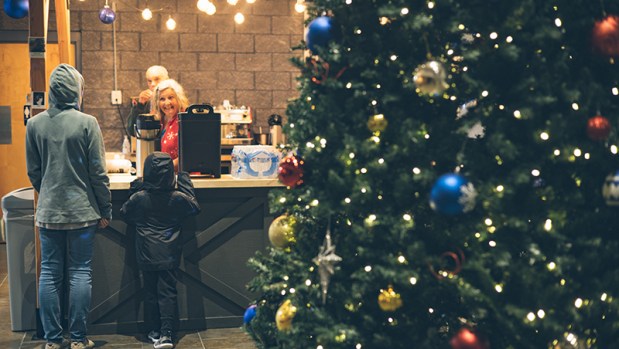 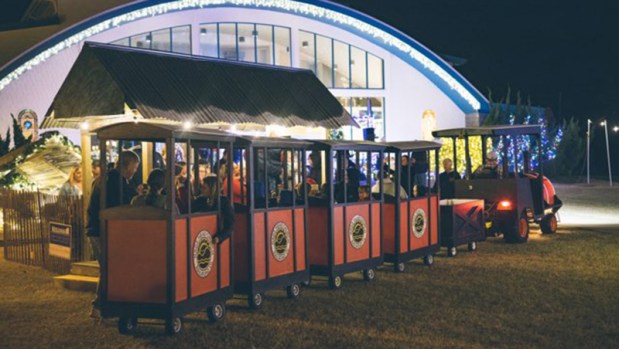 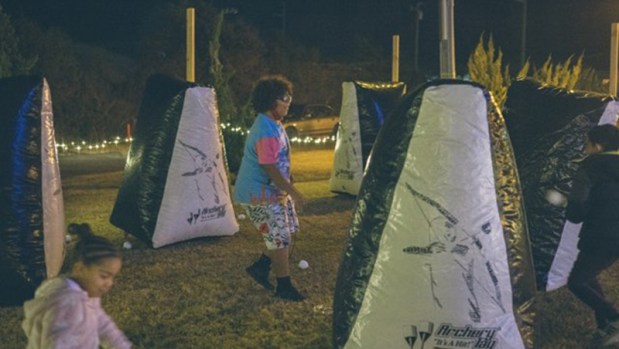 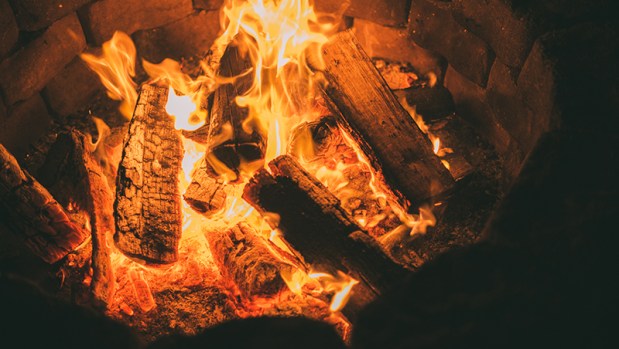 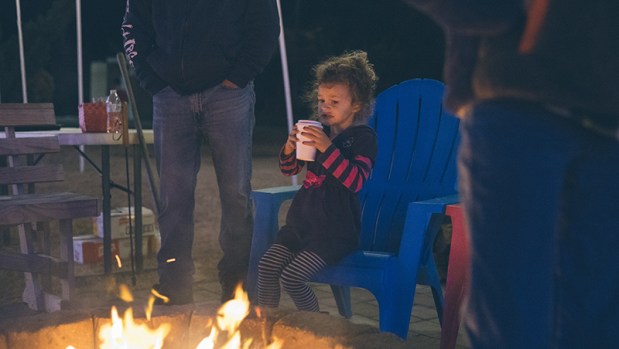 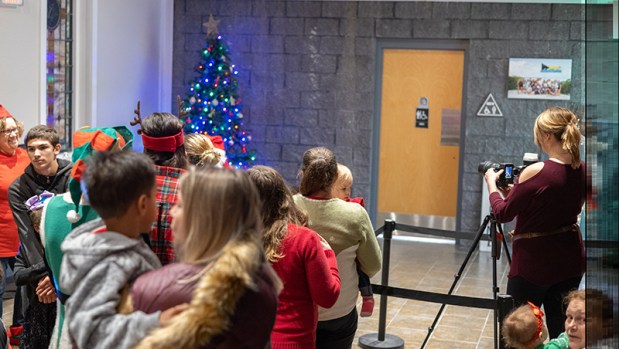 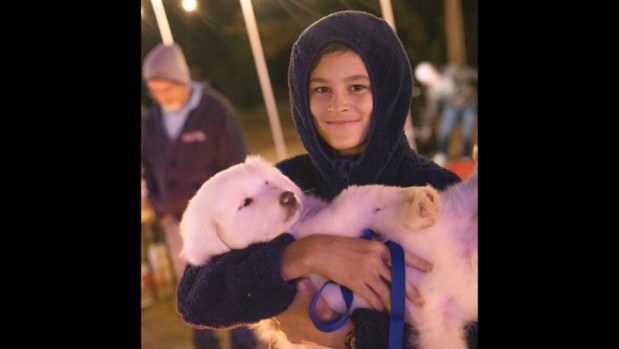 For a couple hours on Saturday night, visitors might have thought they stumbled onto the North Pole on the lawn at Nags Head Church. If one could ignore the almost balmy weather, the sight was one of snowflakes falling, children playing, miniature trains running and music playing.

The Christmas Stop, which runs for two more Saturdays, December 11 and 18 from 6-8 p.m., was designed to shine and share the joy of Christmas. The front lawn is brightly decorated with lights, a 35-foot lit tree and a lighted walkway ushering families into the fun that awaits.

A bonfire was kept going all evening, a perfect place to sip the complimentary cups of hot cocoa and warm apple cider and listen to vocalists Rachel Sanchez and Chloe Williams perform Christmas carols coffeehouse-style.

Outside, after a hot dog meal around the fire, children delighted themselves in the realistic snowflakes that floated down from the sky, thanks to a snow machine the church purchased for last year’s inaugural Christmas Stop. For some children on the Outer Banks, it was the first time they’d played in the “snow.” Older children and teens headed to the snowball fight arena, with lights and mesh fabric framing the borders, and challenged each other to informal competitions with dozens of small white fluffy balls.

The main attraction new this year was the custom-built Christmas train, which made its debut at the Manteo parade last Saturday morning. The train features four adorable cars powered by a high-powered tractor disguised cleverly like a steam locomotive, complete with an air whistle and a bell.

The idea for the train came from Lead Pastor Nathanael Stevens when he was driving by the Kill Devil Hills home on Ocean Acres famous for its Christmas light displays. “They had a train outside and I thought, ‘wouldn’t it be cool if that thing actually ran?’” he said. All through November, the train was built by church members, including retired contractors and builders.

Families lined up at the custom built “train station” to climb aboard the train, appropriately playing the lively tune from The Polar Express. The driver, dressed up like a conductor, tooted the train whistle and began the short, slow ride around the church property.

Unfortunately, the train rides ended early this past Saturday. When the train drove through a hollow, one car tipped; the train staff called emergency services to check out the riders, but thankfully no one was hurt. Nags Head Church decided to postpone running the train for the remainder of the evening until they could determine why it tipped and make corrections so that it will be ready to run on the 11th and 18th.

Inside the building, Santa Claus was waiting to hear Christmas wishes and pose for pictures. Naomi Culley Photography donated time for the event, taking photos and emailing them to families at no charge.

A photo backdrop was set up outside as well, with a wooden manger and a wooden art piece “LOVE” made by Nathan Lawrenson. Photographers were waiting to snap photos and print instant 5×7 copies of families and friends.

Several times throughout the evening, small crowds gathered to hear the telling of the Christmas story from the Bible. “It was a great night,” said Stevens. “We had lots of people, we ran out of hot chocolate and cider, so we’re stocking up for next Saturday.”

Last year, the leaders at Nags Head Church started the Christmas Stop because it was in the middle of COVID, people were lonely and they wanted to offer something to the community to celebrate Christmas. “The pandemic was raging, it was shutting down events all across the country, and we thought, we’ve got to do something,” Stevens said. “The Christmas Stop was launched with the idea of a drive-in theater. We had an FM transmitter and played Christmas classics like Charlie Brown Christmas and Rudolph the Red-Nosed Reindeer,” he said. Those who wanted to socialize bundled up for the all-outdoor event and enjoyed a bonfire and some live music while the snow machine littered the grass with snowflakes.

The plan is to add a little bit each year. Stevens, who grew up playing ice hockey on frozen ponds in his native state of Pennsylvania, would love to see an ice rink up someday at the Christmas Stop, but those are plans may be somewhere down the road.

The event is free, but all donations received will be given to Dare Challenge, a drug and alcohol rehabilitation program. Kellogg Building Supply and Atlantic Financial Services generously donated materials for the event.

“If you’re here, it’s definitely a place you want to stop and enjoy the holiday spirit,” Stevens said. The Christmas Stop is at Nags Head Church, located at 105 Soundside Road, right next to Jockey’s Ridge State Park. For more information, visit https://nagsheadchurch.org/christmas-at-nhc/.