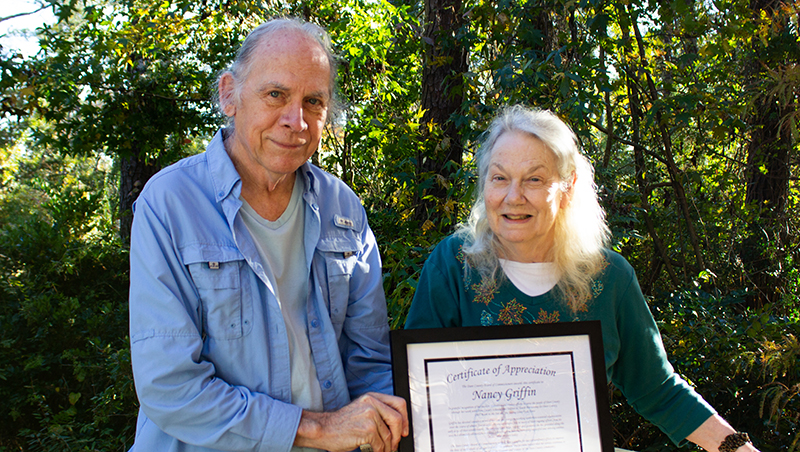 The Dare County Board of Commissioners presented Nancy Griffin with a certificate of appreciation on Monday, Nov. 15, 2021 in recognition of her service to the people of Dare County through her work with Outer Banks Hotline, Dare County Schools, the Children & Youth Partnership for Dare County, OBX Room in the Inn and the Saving Lives Task Force. She is pictured with spouse Ken Dyar. Courtesy Dare County

At a recent meeting, the Dare County Board of Commissioners honored Nancy Griffin, who has had a profound and lasting impact in the county.

Throughout her time on the Outer Banks, “Nancy has dedicated her time and effort to working with many different organizations here in Dare County,” said Robert L. Woodard, chairman of the county’s Board of Commissioners. “Nancy’s dedicated and tireless efforts and contributions have undoubtedly had a significant and positive effect on many in our community – and for this she is to be commended.”

Nancy moved to Dare County from Minnesota in 1982 with husband Ken Dyar and their two children. After visiting the area, they felt “called here” and described the move as following God’s will.

Griffin worked in Dare County Schools for 29 years, serving in several positions, the last as director of secondary education.

Early in 2021, Griffin was named 2021 Delta Kappa Gamma Golden Key award winner for this region of the state.

“This is really a big deal,” said Woodard. The Delta Gamma Kappa Society International is the official association of retired school teachers. “So, it’s a very significant achievement to have your peers nominate you for such a prestigious award.”

Griffin worked with community, non-profit organizations, “joining many of them when they were first established, and then continuing to serve with them as they started to grow and ultimately began to thrive the way they do today,” said Woodard.

She was an original board member and first paid director of the Outer Banks Hotline, an organization delivering temporary shelter, crisis intervention and prevention services to residents and visitors. She has worked with the OBX Room in the Inn, providing lodging for Outer Banks homeless on winter nights. She served as president of the organization.

She was involved in the Dare County State of the Child Conferences. The conferences’ outcomes included funding for a nurse in every Dare County school, the development of the Dare County Youth Center in Kill Devil Hills and the establishment in 1994 of the Children and Youth Partnership for Dare County. She eventually served as executive director of the organization until her retirement in 2020.

She has been involved in the Savings Lives Task Force since is first meeting in 2014 and served as a board member since the beginning.

“Nancy is a true woman of faith,” said Woodard. She was a founding member of the Roanoke Island Presbyterian Church and was instrumental in starting a daycare facility across the street from Manteo High School where student parents could continue in high school while infants were close by in a reliable, five-star daycare.

Nancy Griffin was saluted with a standing ovation from the commissioners and audience members on Nov. 15, 2021. She attended the meeting virtually and was presented with the commissioners’ certificate of appreciation at a later time.

“We wish you well as you and Ken move to the southwestern part of the state. Without a doubt, you will be missed. Thank you again for all of you have done for Dare County. We are truly a better community because of you,” concluded Woodard. 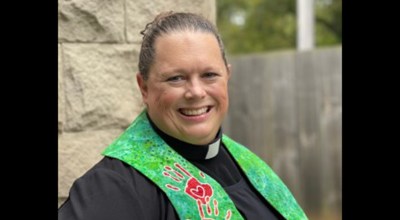