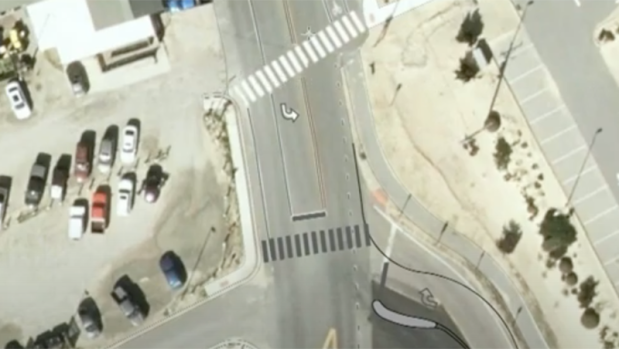 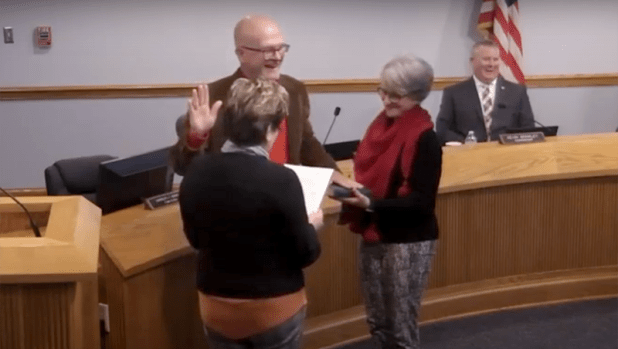 Ben Cahoon, with his wife Melanie beside him, is sworn in as mayor of Nags Head. Nags Head meeting screenshot 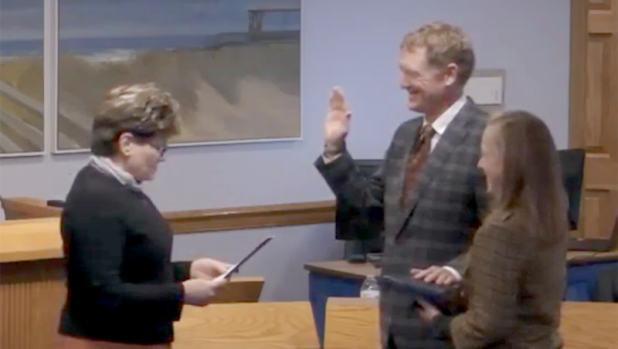 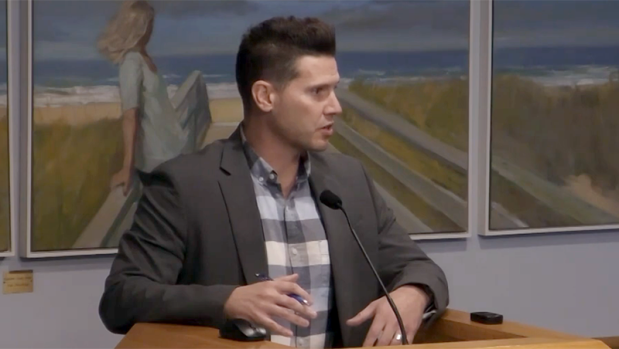 Ben Cahoon was re-elected as Nags Head’s mayor and sworn in at the December 1 commissioners meeting. Cahoon received 604 votes of the 691 ballots cast. Of the two commissioner openings, the positions went to Michael Siers with 365 votes and Bob Sanders with 518 votes. Both men were sworn in and Siers was re-appointed mayor pro tem.

Commissioners held a public hearing to consider a text amendment to the Unified Development Ordiance (UDO) submitted by Jay Overton, representing Albemarle & Associates, that would allow alternative design standards within the Soundside Residential Overlay District for properties that contain an on-site elevation difference of ten feet or more.

Because of the elevation difference, these properties can be challenging to build on under the current UDO regulations, which allows land disturbing activity only 10 feet around the perimeter of the proposed building footprint, decks, driveways and septic systems.

The common solution has been to build bulkheads or retaining walls, which designers and commissioners agreed was not aesthetically preferable. The amendment would allow builders to disturb up to 70% of the land anywhere on the property and be exempt from certain sections of the UDO.

“The text amendment is to get us to where we want to be – informal landscaping, lessening the land disturbance and compliance with the way that that early 1900s area was developed,” said Overton. “The rules are good rules but when we apply them to lots with greater than 10 feet of elevation difference it looks like we’re going to be creating some adverse effects as to our original goals and intent with the ordinance.”

Though staff recommended denial of the amendment, Cahoon made a motion for approval. It passed 4-1, with commissioner Sanders opposing, citing a desire to wait and gather more information before changing the UDO.

Commissioners held a second short public hearing to approve the purchase, financing and budget amendment for a $1.2 million property at 105 W. Seachase Drive, which is adjacent to town property.

Next, new planning director Kelly Wyatt – previously the interim planning director – gave her monthly report to the board. Of significant interest was the updated community rating system from a Class 6 to a Class 5, which allows a 25% discount on flood insurance premiums.

Wyatt also mentioned the installation of sea turtle friendly amber lights in seven locations throughout town, as well as the successful turnouts for the Dowdy Park Holiday Market on November 27 and the tree lighting.

Next, public works director Erik Claussen suggested changes to the town code regarding safety on the multi-use paths due to the increased use of electric bikes, scooters, golf carts and other manual or electric vehicles.

Based on board input, Claussen came up with specific regulations based on speed capabilities, type of power (manual/muscle or electric) and type of path (beach road, highway, or neighborhood), but commissioners questioned the enforcement capability of the regulations.

After some discussion and input from Police Chief Phil Webster, the board decided to hold off on a vote and work instead to simplify the language.

Town engineer David Ryan gave an update on the crosswalk projects on East Bonnet St., West Barnes St. and South Seachase Drive. The town accepted the bid from Hatchell Concrete for the three projects for $122,537. The board approved a budget amendment because Seachase Drive was not originally part of the project. The project will begin in early 2022 with a 60-day finish date.

In other crosswalk news, Claussen reported on an August NCDOT traffic study requested by the town to assess the intersection of Gray Eagle where it intersects Highway 158 and the area around Jennette’s Pier on NC 12 and South Old Oregon Inlet Road where road markings are poor and a diagonal pedestrian crosswalk creates a potentially unsafe crossing.

The board discussed making East Gray Eagle a right-turn only onto Highway 158 through a “banana” island and Claussen presented plans for roadway and crosswalk changes near Jennette’s Pier. The current crosswalk by Sam and Omie’s would be moved a little farther south to increase pedestrian visibility for stopped traffic and South Old Oregon Inlet Road traffic would be forced to make a right turn onto Highway 158 through a “banana” island and additional signage. Improved road markings will help traffic wanting to make that left northbound from Hwy 158. “It will be much more intuitive for pedestrians, much more intuitive for drivers in this particular intersection and it should create a much safer intersection. We’re trying to square everything up and slow everything down,” Claussen said.