Manteo mayor and commissioners sworn in 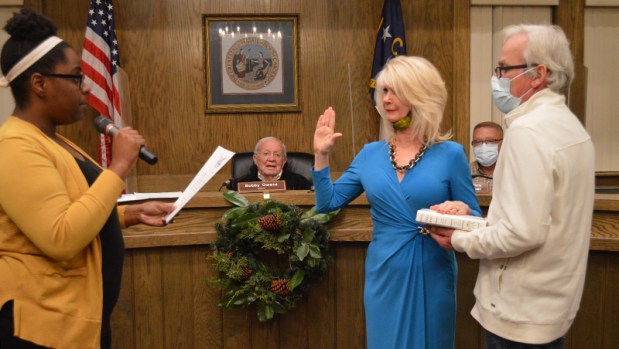 Sherry Butcher Wickstrom raises her hand to take the oath as Town of Manteo commissioner. Her spouse Mark Wickstrom holds the Bible. In the background is re-elected Mayor Bobby Owens who was sworn in first. Administering the oath is town clerk Jamie Whitley, who was reappointed by the board. Wickstrom is new to the Board of Commissioners. Mary Helen Goodloe-Murphy photo 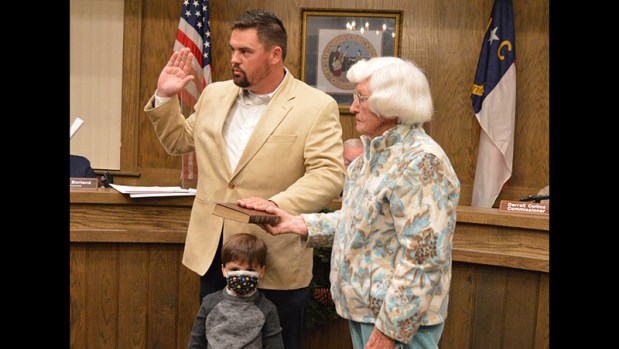 Edward Mann Jr. recites the oath as Town of Manteo commissioner. Holding the Bible is his mother Betty Mann. Standing with him is his son Nash. Mann was re-elected to the Manteo Board of Commissioners. Mary Helen Goodloe-Murphy photo 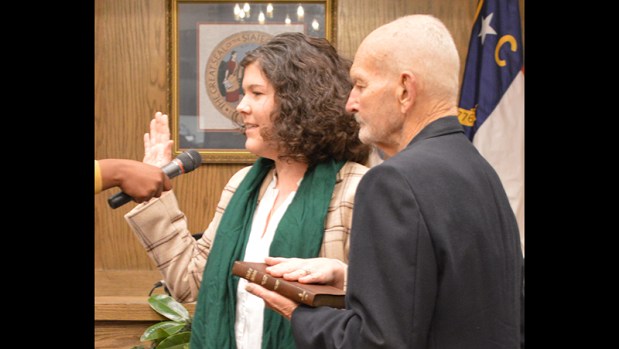 Ruth Stetson repeats the oath as Town of Manteo commissioner. Holding the Bible is Phil Scarborough. Stetson is new to the Board of Commissioners. Mary Helen Goodloe-Murphy photo 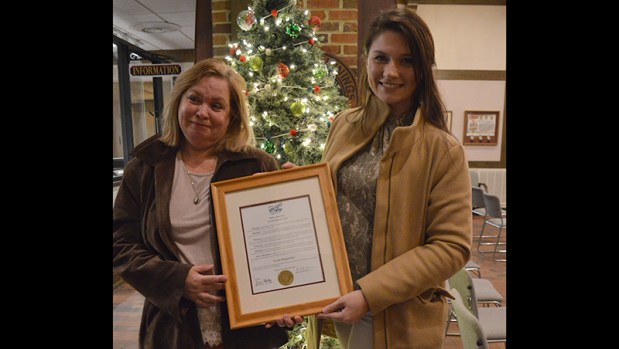 With solemnity and many onlookers, four people were installed in elected offices in the Town of Manteo on Dec. 1, 2021.

Bobby Owens, installed for another term as mayor, said “let’s give the mayor the vote.”

After 14 years, Richie Burke was leaving the board and made brief remarks. Once he vacated his seat, new names were positioned and the two new board members Wickstrom and Stetson moved onto the dais.

Betty Selby was re-appointed mayor pro tem. She was nominated by commissioner Darrell Collins. Jason Borland said he would like to see the job rotated among board members. He mentioned new commissioner Wickstrom. The vote for Selby was 4-2 with Borland and Wickstrom counted as negative.

Whitley was reappointed to the town clerk position. Ben Gallop will continue to serve as town attorney.

Normally, the board would appoint a town manager. However, current manager James Ayers will leave the position Dec. 17 and the board tabled the matter.

Manteo employees in Public Works and Water and Sewer Departments provide mission-critical services throughout the community. Following directions from the board, Ayers conducted a survey of Dare towns and concluded “other comparable jurisdictions appear to have increased their pay, and staff compensation in Manteo lags the competition in these public services departments.”

Ayers recommended and the board approved an across-the-board raise of two steps, or a 10% pay increase.

Parking on Exeter Street is “a problem,” said Owens. The management at Bay Tree has requested a no parking zone for safety reasons.

Two commissioners asked if the problem was short-term, associated with the construction at the Health and Human Services campus, or long-term, existing prior to construction. Mann wanted to hear from town police and fire chiefs. The matter was tabled.

Next, the commissioners considered a possible new program, “Memorial Recognition Program.” Such a program was previously considered and vigorously debated.

Ayers told the board that a group of people has suggested a memorial bench by the waterfront for a dear friend. Ayers opined that an increased need for site furniture exists.

Collins said a memorial recognition program was “a good idea.” Mann said he wanted such a program for individuals, not advertising. Wickstrom asked how long such memorial would last. Stetson suggested a well-curated story in the life of the person memorialized and a hook to more history about the village.

Town staff will develop standards and guidelines and come up with a program. The draft program will include eligibility standards, coordination with existing plans, types such as a bench, a table, trees and who reviews the application.

The town is working to enhance the Davis Lot on the waterfront. An informal bid process resulted in two bids. However, the apparent low bidder at $131,500 was double the engineer’s estimate.

Town staff was directed to negotiate with the apparent low bidder regarding possible cost reductions.

The board held a closed session with no action taken.