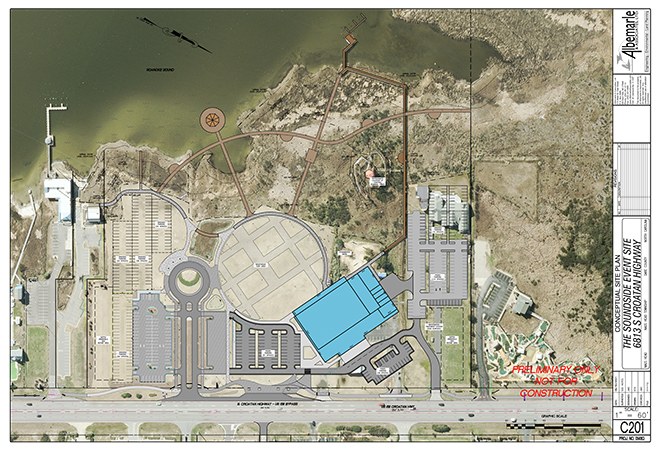 Early renderings by Albemarle & Associates of a soundside boardwalk project In Nags Head, subject to change based on regulatory input.

The Dare County Tourism Board is in the planning and permitting stages of a large boardwalk project along the Soundside Event Center property in Nags Head.

The proposed boardwalk would start behind the now-closed Pamlico Jack’s property, which is owned by the Tourism Board, connect with the existing boardwalk and gazebo and extend to the Harvey Public Sound Access. It would feature wide walkways and educational stations “so people can not only get some exercise and enjoy the view, but appreciate what they’re looking at, too,” said Outer Banks Visitor’s Bureau executive director Lee Nettles.

The Tourism Board is in discussion with CAMA, US Army Corps of Engineers and NC DEQ to ensure protection of submerged vegetation; the project is pursuant to receiving proper permits and authorization from regulatory agencies.

Albemarle & Associates has created a conceptual design that incorporates current uses of the Harvey site like kiteboarding and windsurfing. “It’s important to the Tourism Board that we preserve that access and those types of uses. We want to be flexible with the design so we expand the use but not preclude the uses that are already out there,” said Nettles.

In areas that are currently used for kiteboarding, the design brings the walkway back over the shore, so kiteboarders won’t have to maneuver around the access, based on input from user groups. Nettles also expects increased from the boardwalk like sailing, and possibly crabbing. The Tourism Board is planning for walkways wide enough for two wheelchairs to pass each other comfortably – approximately 10 feet – rather than the standard 6 feet width.

The idea of extending the boardwalk has been a topic of discussion for a while. According to Nettles, a few years ago the Town of Nags Head was considering this but “it went from being on the front burner to the back burner. Hopefully our project will reignite things, and bring in the community and other stakeholders along the way.”

Currently, Duck offers the only large public boardwalk along the Albemarle Sound. A similar attraction in Nags Head is expected to generate significant interest from locals and visitors. There is also a boardwalk along the Shallowbag Bay in downtown Manteo.

The project will also be an outdoor compliment to the Soundside Event Center, a 48,000-square foot building (which, according to Nettles, is about the size of Publix grocery store and about half the size of the former K-Mart) that can host sporting tournaments like cheerleading, gymnastics, basketball and pickleball, and possibly concerts and social events.

“I think it’ll be quite an attraction for that immediate area and for the destination,” Nettles said. “It’s a great spot to watch the sunset.”

Though the Tourism Board may be applying for grants, the majority of the funding for the boardwalk will come from the board itself, which receives 1% of occupancy tax paid by lodging reservations and 1% of prepared meal tax. (The occupancy tax is 6%, shared by the county and six towns where reservations are made [3%], beach nourishment [2%] and the Tourism Board [1%].) There is no estimate yet as to how much the boardwalk will cost and it’s still all pending permits by regulatory agencies, which are behind due to COVID-19. Assuming permits are issued, Nettles hopes to finalize a design by late spring, develop construction plans and put it out to bid next June. Construction could begin toward the end of 2022 and be completed in the first part of 2023.