Hatteras Christmas parade fun for all 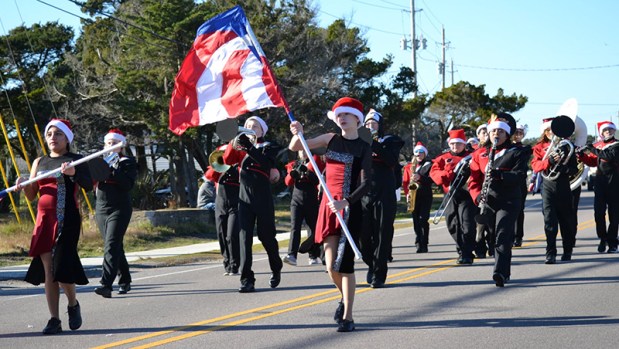 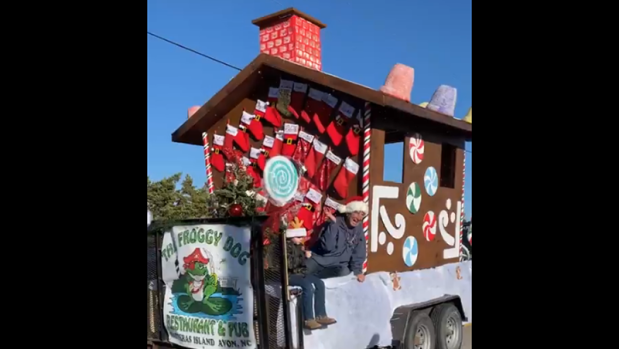 The Froggy Dog and Muffins and Scones entry in the Hatteras Village Christmas Parade won first place. The large, trimmed out gingerbread house moved along NC 12 while gingerbread cookies were distributed along with a card for coffee and cinnamon roll from Muffins and Scones. Outer Beaches Realty photo by Lily Galleo 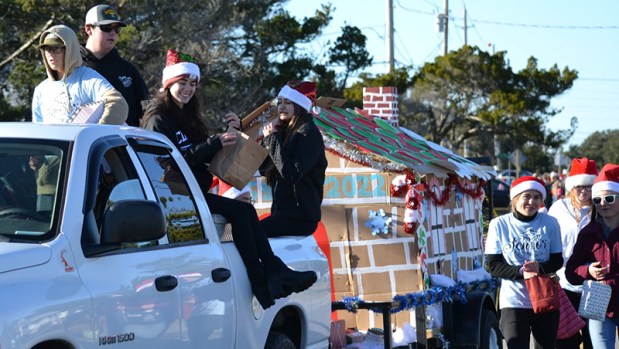 The parade was delayed a day due to rainy weather on a warm Saturday, Dec. 11. On Sunday, the temperature was 51 degrees with wind gusts around 20 miles per hour, but the skies were dry and sunny.

Acknowledging the weather, one float designer, and perhaps others, left off tinsel garland calculating that the wind would pull off the decoration.

The judges, set up at the town center, awarded prizes to the Froggy Dog Restaurant/Muffins and Scones entry. The large, trimmed out gingerbread house moved along NC 12 while gingerbread cookies were distributed along with a card for coffee and cinnamon roll from Muffins and Scones.

Third place went to the “Fez,” the affectionate nickname for The Fessenden Center in Buxton. The float featured the video game Pac-Man.

Dare Sheriff Doug Doughtie led the parade for the 12th year. Holding the traditional second place in the parade lineup was Conner’s Supermarket.

Several entries made first time debuts, including the Cape Hatteras Secondary Class of 2022, the Purls, a clever name for the knitting group and its golf cart festooned with 75 homemade pompoms, and Hatteras Trailer Trash, featuring a reindeer tied to the front of the truck.

In all, about 30 entries participated in the parade this year.