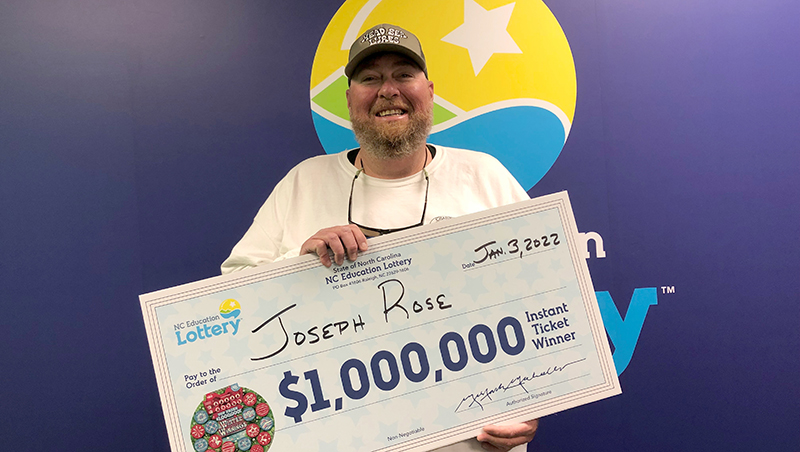 With less than five hours left in 2021, Joseph Rose of Morehead City said he celebrated his most exciting New Year’s Eve ever when he won a $1 million lottery prize, according to a press release from the North Carolina Education Lottery.

“2021 went out with a bang,” said Rose on Monday as he collected his prize at lottery headquarters in Raleigh.

The celebration began Friday night at the Handy Mart on Arendall Street in Morehead City when Rose, who works for a landscaping company, stopped for a drink on his way to a New Year’s Eve dinner with friends. He said earlier in the day he had won $250 on a scratch-off and decided to try his luck again.

Rose bought a $20 Winter Winnings ticket and took it to the parking lot to scratch it. After seeing the match, he ran back into the store to use the ticket scanner to make sure of his win.

“It blew me away,” said Rose of his win. “I can’t quit smiling. It’s going to take a whole lot to top this one.”

His good luck made Rose the first winner of one of the two top prizes in the Winter Winnings game, but it was not his first big scratch-off win. Five and a half years ago, in July 2016, Rose won a $150,000 prize on a Wheel of Fortune scratch-off.

Rose said he plans to do some home improvements and invest the rest for retirement. “It was a blessing,” he said. “Somebody was going to win it. I’m glad it was me. It’s going to make life a little easier.”

For details on how money raised by the lottery made an impact across the state in 2020, visit www.nclottery.com and click on the “Impact” section.