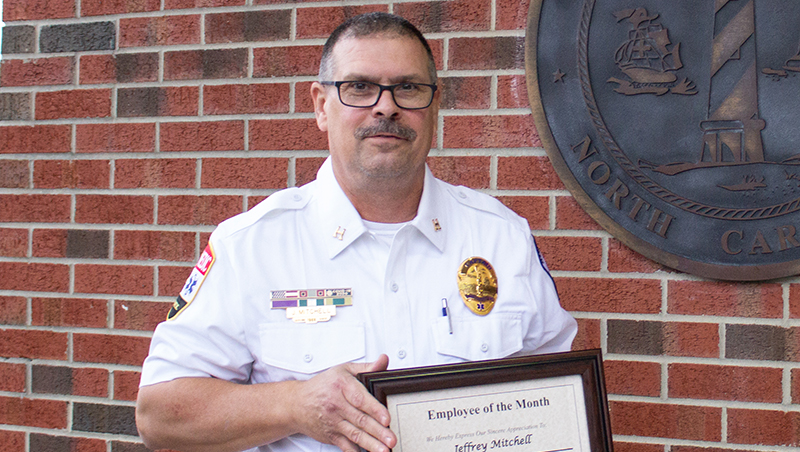 Jeffrey Mitchell, who serves as a captain with the Dare County EMS Department, was named Dare County’s Employee of the Month for January 2022 at the Dare County Board of Commissioners meeting held Monday, January 3, 2022.

Mitchell began his career with the Dare County EMS Department on August 14, 2000 when he was initially hired as a paramedic. In 2003, he was promoted to lieutenant before being promoted once again to his current position of captain in 2017. Mitchell was presented the Dare County Employee of the Month award by Dare County EMS Chief Jennie Collins, who, along with three of his colleagues – Captain Julie Anderson, Dan Lane and Ethan Jones – all nominated him for the prestigious honor.

“Jeff’s been with the county for 21 years, and he’s one of those folks that never does anything at the minimum,” Collins said during her presentation. “He’s always got to go above and beyond, and he’s never satisfied with how something turns out – he wants to make it even better.”

Collins went on to highlight how Mitchell consistently tries to find articles and quizzes for his employees that will test their medical knowledge as well as scenarios that will keep them on their toes. She also commended him for always communicating with these employees in a manner that is both timely and fully transparent.

In her nomination form, Collins wrote, “Multiple submissions stated that his efforts in making everyone feel welcome and appreciated are a testament to his caring nature and boost their morale. He willingly puts others first, and the relationships he’s created with his shift and peers is truly exceptional. Having his employees and coworkers state such detailed examples goes to show the positive impact he has on them and how much he means to all of us.”

In addition to serving as a shift captain, Mitchell also has a wide array of other responsibilities, including tracking the maintenance that is performed on all of the Dare County EMS Department’s vehicles, working with Dare County’s fleet maintenance division and serving as a member of the county’s accident review committee.

Mitchell also heads the Dare County EMS Department’s workgroup that is tasked with developing and revising vehicle specifications for all of the new vehicles that replace the existing vehicles when necessary. He works closely with the vehicle manufacturers in order to address needs that arise and to monitor the entire process.

Collins also noted that Mitchell recently addressed a problem with the fleet’s emergency lighting systems that caused the lights on the ambulances to experience water leaks. According to Collins, this resulted in the entire fleet’s lights being replaced twice until the problem was fully resolved, which was done at no cost to the county.