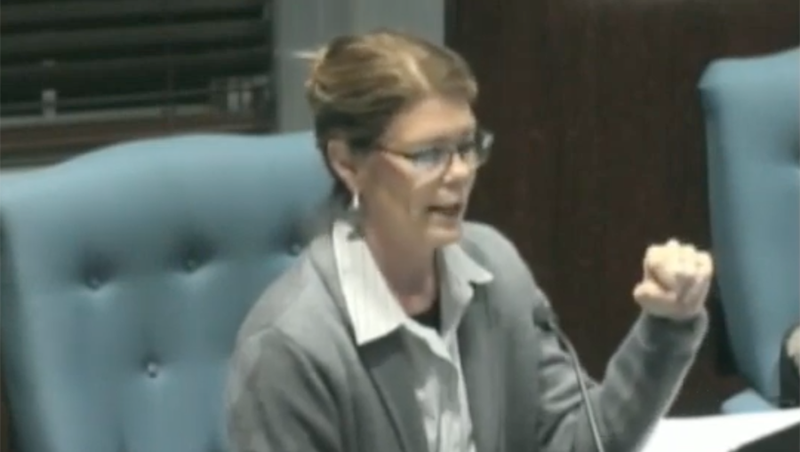 Commissioner Selina Jarvis argued that mobile classrooms does not equal adequate public facilities at the January 3 board of commissioners meeting. Currituck meeting screenshot

The first Currituck commissioners meeting of 2022 was led by Vice Chairman Paul Beaumont in the absence of Chairman Mike Payment. Commissioner Bob White was also absent due to illness. With only five commissioners present, commissioner Selina Jarvis made a motion to table the vote from last meeting regarding the special use permits requested by Flora Farms and Fost developments so that all board members could be present to voice opinions, but the motion did not pass. And, after a lengthy deliberation, commissioners voted to issue permits to both applicants.

In a fired-up speech, Jarvis opened the conversation by stating, “Over the last two weeks I have gone back through the beautiful binders we were provided with. I have looked at school numbers and I have really weighed and deliberated the word adequate, which I was accused of weaponizing at the last meeting. To me, seats in a mobile classroom don’t fulfill an adequate education. It may give adequate seats for butts to sit in, but it doesn’t provide an adequate education that our students deserve nor does it exemplify an adequate facility, because seats in a mobile classroom do nothing to provide adequacy for cafeterias, gymnasiums, playgrounds, common areas, nor auditoriums. All of these things make up important aspects to our children’s education that seats in a mobile classroom do not provide. And I would say if we’re just looking for adequacy we are bordering on inadequacy in this county. Approving these preliminary plats tonight does not ensure adequacy, it ensures inadequacy for our facilities for our children.”

She continued, “I am not against growth, I am not against welcoming visitors to our county to become residents, but I cannot support growth that is not helping our children in an adequate education. We have got to let our facilities catch up to our growth to make sure that the next generation is educated like we want our children to be educated. Our students deserve it. I am not weaponizing the word adequate, I am simply stating that our children deserve better and inadequate buildings and inadequate facilities are not acceptable to me.”

Commissioner Kitty Etheridge sided with Jarvis, referencing the rules and regulations in the UDO regarding adequate public facilities adopted by the board in 1994. “There’s nothing wrong with putting it off until our schools can catch up – that’s all we’re asking for. This is a disservice to the students of this county if we approve something, especially when we go against our own rules and regulations,” Etheridge said.

During the quasi-judicial hearing at the December 20 commissioners meeting, the lawyer for the applicant stated that if all the conditions were met by the applicant then the county had the legal obligation to approve the request. Flora Farms brought in expert witnesses that testified that the school did have the ability to provide adequate public facilities.

Owen Etheridge clarified the adequate public facilities ordinance by saying it “lays out and says within two years you have programmed in place the expansion or whatever what is needed.”

And according to Beaumont, the county is pursuing expansion projects: “We are planning, we are moving, we are appropriating money and sending it to where it needs to go for the design and for the expansion and I think we’ve adopted a very aggressive approach to getting those things in place.”

The crux of the issue was that the board is supposed to take a neutral role in quasi-judiciary hearings, and if the requirements are met as evidenced by credible expert witnesses, they are obligated to issue the permit, even if personal feelings would make them want to withhold it.

“My current struggle is that unless somebody from the community brings forth opposition to what is before this board and 10 years expert testimony, then this board largely has to go with what is presented or is offered as an expert testimony,” said Beaumont. “We are at a disadvantage and that’s state statute because we no longer can consider testimony from people and from the citizenry – they have to be qualified experts in what they are testifying to. I don’t like it but it is what it is.”

The board asked Jamie Schwedler, representing the applicants for both Flora Farms and Fost, if they were willing to make adjustments in the phasing of the project to allow the county more time to catch up with growth.

For Flora Farms, the applicant had previously pushed the phasing back by six months, but agreed to an additional three month delay for phases 4 and 5. Based on the new agreement, the phases are to begin as follows: 1—December 1, 2022; 2—June 1, 2023; 3—December 1, 2023; 4—March 2025; and 5—June 1, 2025. These are the record dates. Construction is expected to take approximately six months, followed by families generating school students shortly after, so phase 1 could expect students for the August 2023 school year.