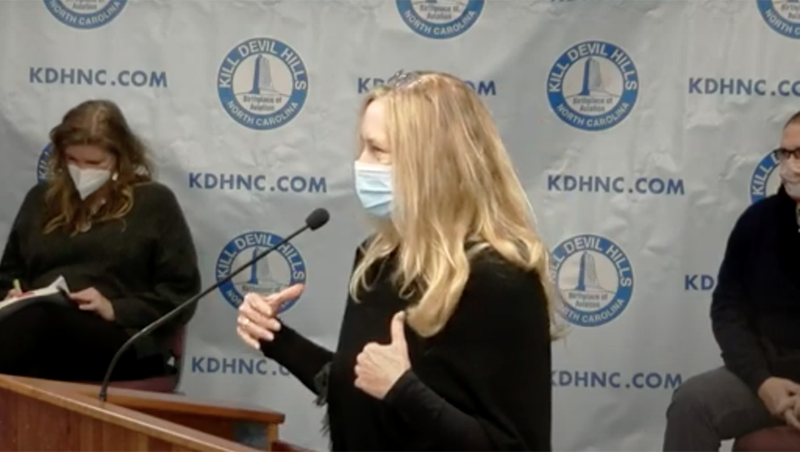 The first amendment will increase floor area ratio (FAR) for multi-family development in the Light Industrial Two Zone. “Floor area ration, for those who want to know, is sort of a controlling mechanism for density for the bulk of a building,” said Mayor Ben Sproul. “There are a number of other elements to limit the scope of the project including height, setback, necessity for stormwater and so forth – it’s just one part, but the thinking behind this is, we want to encourage housing that is accessible and affordable and workforce related and all these sorts of things apply to this area of our town.”

The next three amendments were, according to the board, “just clean-up clerical” amendments regarding density and sidewalk requirements for cottage courts and cluster homes.

During the public comment portion of the meeting, resident Sallie Kerr presented the board with a petition signed by 77 people requesting commissioners consider restricting or limiting the length of piers on Kitty Hawk Bay. Her complaint comes after a neighbor put in pilings for a 100-yard pier. “It’s a football field. Everyone was shocked,” she said. “There’s got to be some limitations. There’s another permit pending for 350 feet so you can see where we’re going here. I think it’s something you should take into consideration so Kitty Hawk Bay doesn’t look like it’s all piers,” she continued.

Though commissioners do not typically respond during public comment, commissioners did respond and had a discussion about pier lengths and their limited ability to make changes, since pier permits are given by Coastal Area Management Act (CAMA).

“We know that the rules that are currently in place do not allow us a lot of control over it but it’s certainly something that can change and we will certainly be discussing it,” said Sproul, though he said later “it’s technically outside of our jurisdiction.”

After some group discussion, the mayor concluded the conversation by saying, “It might be worth another look . . . at the same time balancing property rights. A lot of those properties are million-dollar properties and part of the value is the ability to have a nice long pier in front of it. We try to balance all those things together.”

Moving on, commissioners heard a presentation from Robert Taylor of Potter and Company, Certified Public Accountants about the results of the town’s annual audit for fiscal year ending June 30, 2021. “You had a very successful financial year,” Taylor said via video conference. The town’s net position ended at $59,618,282, an increase of almost $4 million from the year prior.

However, Taylor advised that 2022 will look different than the year prior because “we had a lot of COVID-related monies that came in.”

In committee reports, commissioner Terry Gray made a motion to adopt a resolution to amend the town charter to change the mayor’s term from two years to four years and set a public hearing date for February 7, 2022. “It makes sense,” said Gray of the prospective change.

The meeting concluded with words of sympathy for the family of Mary Elizabeth Quidley, 64, who passed away unexpectedly on December 16. Quidley joined the town of Kill Devil Hills in 1984 as a tax collector and later served as town clerk. “It’s a big loss. My personal condolences go out,” said Sproul.

Snow geese: In for snowy weather?