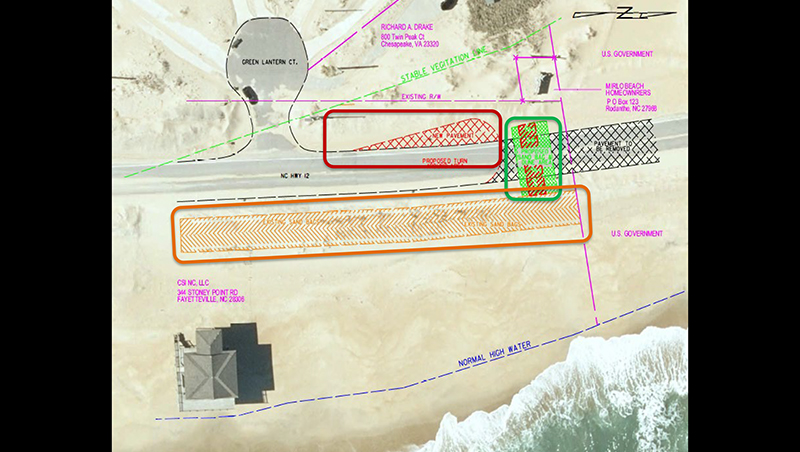 NCDOT has requested a variance to put in a modified cul-de-sac at the remnant end of NC 12 when the Rodanthe Bridge is opened. Modified cul-de-sac is red cross-hatched area. Installing sandbags and dune within NCDOT right of way east -west along the Refuge boundary is green and red highlight area. Existing sandbags south of Refuge boundary, orange-hatched area, remain. NCDOT image

The Rodanthe Bridge now under construction is “almost finished.”

The 2.4 mile bridge is structurally complete, reports Pablo Hernandez who reeled off items needing to be finalized.

Some metal railing needs to be mounted. Two of 25 expansion joints remain to be finished. The bridge’s deck is due to be textured. The work trestle must to be dismantled. Two cranes remain but a third one will be added to facilitate removing the last crane. Work remains at the roundabout. One of two slabs to connect the concrete bridge to NC 12 asphalt has been cast.

What’s not even started is the end of current NC 12 at its southern intersection with the Pea Island National Wildlife Refuge.

Referred to as the remnant of NC 12, the road will continue access to Mirlo Beach and additional subdivisions north of the roundabout, which is the exit off the Rodanthe Bridge.

NCDOT has proposed a modified cul-de-sac, not NCDOT’s standard. Additionally, the state transportation agency is asking to use a different kind of sandbag, previously approved on a trial basis for a breach in Ocracoke but not used.

First, the modified cul-de-sac increases the asphalt footprint, which is considered development. That development is within or close to an ocean hazard zone. The NCDOT proposal does not meet requirements.

Next, sandbags used by NCDOT are the standard pump-and-fill; that is, a sand and water slurry from the close-by beach is pumped into big bags.

NCDOT is proposing to use a 50-foot long sandbag that has four to five compartments that are filled with dry sand by using regular sand-moving equipment like excavators. A variance is sought because the new bag does not meet the definition of sandbag.

The new sandbags would run west-to-east across the old NC 12 path. Existing sandbags filled and placed in 2012 will remain.

The NCDOT proposal, which was denied by the Division of Coastal Management, will be before the Coastal Resources Commission at its February 9-11, 2022 meeting in Beaufort. A variance is requested.

Regarding parking at the south entrance to Pea Island National Wildlife Refuge, the December’s update meeting slides say “The idea is that no parking will be allowed in the cul-de-sac and certain other areas. This will be by ordinance & this can be enforced.”

No parking signs are already in place along NC 12.

The closest public beach access is about a mile south at Dare County’s Public Beach Access adjacent to the Rodanthe-Waves-Salvo water plant. It has parking.

Access within the national refuge will be provided at the north end of the bridge. A work area will be turned into a parking lot with three spaces for campers and RVs and 24 other parking spaces. A kiosk with information will be installed in the parking area.