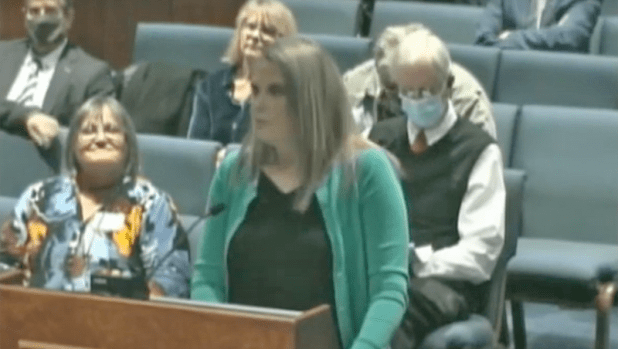 Madonna Stafford of Carr, Riggs & Ingram presents the annual audit report to the Currituck Board of Commissioners. Currituck meeting screenshot 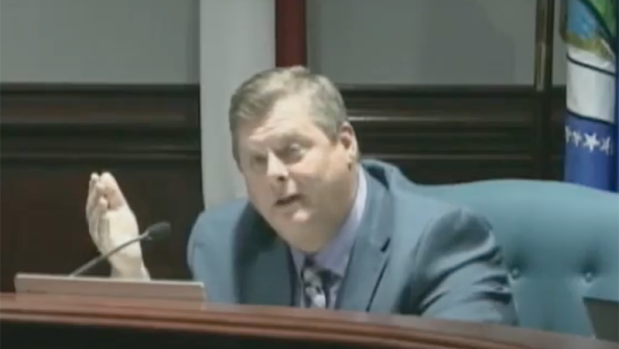 Commissioner Bob White urges Moyock residents to form a civic association for changes they’d like to see in the county regarding growth. Currituck meeting screenshot

Madonna Stafford from Carr, Riggs and Ingram presented the June 30, 2021 audit report to Currituck commissioners, stating, “It was truly a record-breaking year for revenues.”

The county’s net position increased by $25 million, totaling $236,140,630 for the fiscal year. This is approximately $14.5 million better than the prior year.

According to Stafford, the increases were primarily in governmental revenues – the largest being property taxes, sales tax, in-state shared revenues, land transfer tax and occupancy tax.

In official meeting business, commissioners approved an amendment to the Unified Development Ordinance to allow larger businesses – up to 10,000 square feet – in the mixed residential (MXR) zoning district on lots facing major arterial streets (Hwy 158 and Hwy 168). The current law allowed businesses only up to 2,500 square feet.

In addition, the request included language that would allow restaurants, grocery stores, retail sales stores and small shopping centers in the MXR district with a zoning compliance permit.

For comparison, development services director Kevin Kemp said that a Trader Joe’s is between 10-12,000 square feet, whereas a Food Lion is between 20-25,000 square feet. The amendment is not to approve a specific business at this time, but rather to open up possibilities for businesses in Grandy.

“Part of the challenges with MXR in the past has been, ‘Okay what do we do with the commercial piece up front when they’re limited to a 2,500 square foot building?’ That’s awfully restrictive and you’re kind of limited to maybe a Starbucks or something along those lines,” Kemp said.

A larger potential commercial space could make development in the area more appealing.

Representing applicant W&J Development, LLC, Paul O’Neill said of the Grandy area, “It needs some pick-me-up.” According to O’Neill, there is a prospective housing development plan that would cost between $275-300,000 per unit. “We have teachers, we have law enforcement and you know we always talk about the service workers – everybody wants service but they don’t want workers to have any place to live. Well, this is some place maybe even people with a blue collar job could afford to live and raise a family in in Currituck County.”

Next, commissioners held a quasi-judicial hearing to consider a special use permit for Foster Forbes Mine, to excavate 6.23 acres of a 41 acre property located at 8180 Caratoke Highway in Powells Point.

The applicant brought in expert testimony to prove that the mine would have no negative impacts on the environment or neighboring property values.

Neighbors of the Foster Forbes Mine – the O’Sullivans – had concerns about the potential decibel levels of operating equipment, air quality disturbances due to dust particles, possible well contamination and a reduction in the wildlife that they currently enjoy on their property.

The special use permit was approved.

In new business, commissioners tabled a consideration for the Brindley Beach Building on Lot 1 in Maple Commerce Park until the February 7 meeting.

During public comment and commissioner reports, resident Glen Hines shared concerns about the possible backlog of septic permits due to the retirement as well as dismissal of inspectors in the county.

Citing public complaint regarding growth in Moyock, commissioner Bob White encouraged residents of Moyock or those in the northern part of the county to form, as Corolla has, a civic association if there are changes they would like to see. “You can be the opposition to a project that comes forward. If you have a good enough group you can put together enough numbers to bring in an attorney to oppose or experts to come in to offer a counterpoint to the projects that come before us. On these special use permits, we are often left without anyone except for the applicant in the room and there’s no voice of the resident. We are not allowed to have a personal opinion – we have to consider evidence in that case as a quasi-judicial board … Having a good civic association or a group of people who want to see something different for their county can be pivotal and really help change the way things look and feel in an area of the county for positive effect.”

County manager/attorney Ike McRee reported that due to staffing shortages, visits to the animal shelter will be by appointment only. This was to be reevaluated on January 28.