NCDOT cautions drivers to be careful, drive slowly as refreezing possible on some roads 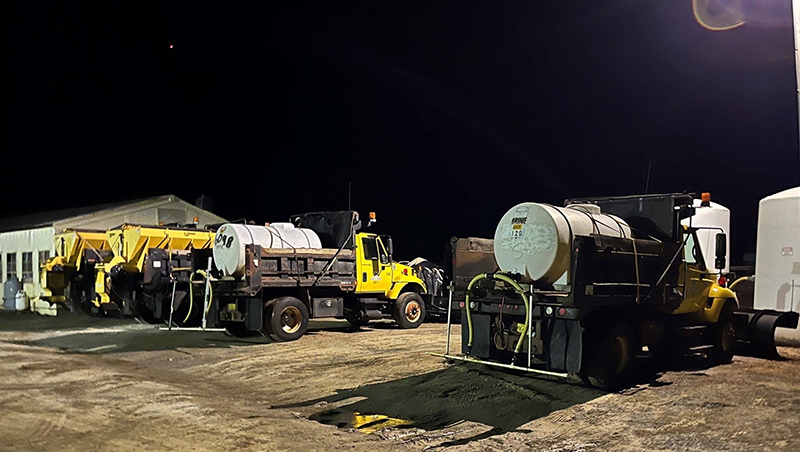 North Carolina Department of Transportation crews and contractors have trucks and graders ready to treat and plow roads during winter weather. Crews in Northampton County, shown here, had their trucks ready earlier this week to pre-treat roads with brine before this weekend's winter weather. Courtesy NCDOT

The North Carolina Department of Transportation is advising the public to be careful if they must drive Saturday night and Sunday morning as bitter cold temperatures will create slick, icy roads and bridges across parts of the state.

More than 1,800 NCDOT crews and contractors worked through the night Friday and into the morning Saturday to apply salt and sand to roads as snowfall moved across the state. On Saturday, NCDOT crews continued their work to clear roads impacted by the overnight storm. In addition to their pre-treatment efforts, NCDOT crews and contractors applied 6,200 tons of salt, 538 tons of salt and sand mixture and another 412,000 gallons of brine to de-ice roads.

Most crews were close to completing road clearing efforts Saturday and planned to head home to rest before returning Saturday night to work on trouble spots where roads could refreeze. Transportation officials and the National Weather Service warn that dangerous travel could continue into Sunday morning as temperatures in the teens and 20s overnight coupled with heavy winds could keep ice on some road surfaces.

“Like all industries, NCDOT has been impacted by COVID-19 and staffing shortages. Transportation officials ask that people be patient,” stated a press release from NCDOT. “Crews may not be able to respond as quickly as we have in the past but will work through the weekend to get roads cleared as quickly as possible.”

On the coast, many of the state’s ferry routes were temporarily suspended Saturday due to the heavy winds. Stay tuned to updates on ferries on NCDOT social media channels.