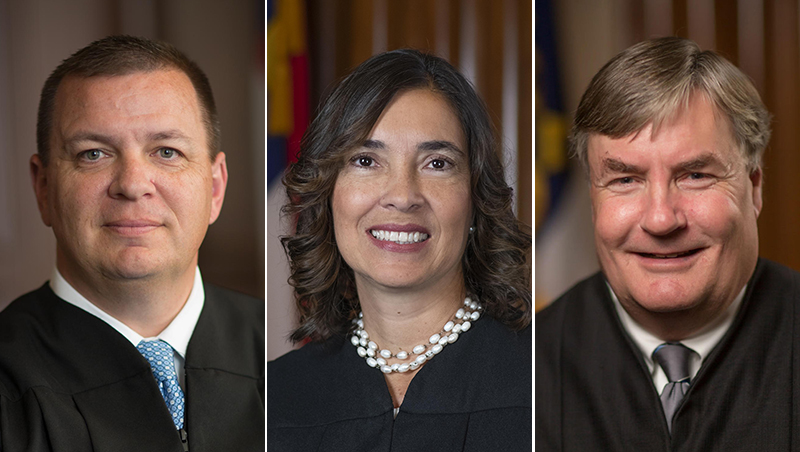 Three North Carolina Supreme Court justices said Monday they won’t step aside from hearing a blockbuster redistricting case this week, rejecting requests from lawyers covering both sides of the litigation to recuse themselves.

Their decisions likely mean all seven justices will listen to remote oral arguments Wednesday in the challenges to the state’s recently enacted congressional and legislative districts.

The absence of justices from proceedings could have tilted the outcome as to whether lines approved for the next decade will be upheld or struck down. Registered Democrats hold a 4-3 seat advantage on the court. Earls and Ervin are Democrats, while Berger is a Republican.

Lawyers for Republican legislative leaders had asked that Earls be recused, citing previous ties to groups involved with the plaintiffs who sued, as well as her history as a civil rights attorney challenging legislation approved by GOP lawmakers. They also questioned her impartiality because lawyers representing plaintiff Common Cause work for an advocacy group that she helped create, the Southern Coalition for Social Justice.

The GOP attorneys asked that Ervin step away because as the only sitting member running for reelection this year the court’s decisions could affect when elections he’ll be competing in are scheduled. The court ruled in December that the March primary would be delayed to mid-May while the litigation worked its way through the courts.

And attorneys for plaintiffs who challenged the maps said Berger should remove himself from the case because his father, Senate leader Phil Berger, is a named defendant and whose district is among those being challenged.

Berger, who in January had already rejected a similar recusal request related to his father’s involvement in another case before the court, issued a one-sentence order denying the motion.

Earls, whose written explanation went nine pages, said “I have subjectively determined that I can and will be fair and impartial in carry out my duties in this case.”

She said that three of the concerns that the lawyers for Republican lawyers brought up were raised in a previous recusal motion in a 2019 redistricting case and that was denied by the court. They include the financial support the North Carolina Democratic Party gave her campaign in 2018.

“The entities contributing to my 2018 campaign are not parties to this lawsuit,” she wrote, As for her professional association with Southern Coalition lawyer Allison Riggs, Earls wrote that it’s now been years since she’s worked with her, and thus the previous association “therefore is not disqualifying.”

Ervin wrote that he failed to see how the court’s past or future rulings in the redistricting lawsuits would impact his ability to obtain reelection to the court in November.

“I was not elected from and am not seeking reelection in any of the districts that are at issue in this case,” Ervin wrote, adding that the December order had the same effect on him as anyone else who has announced or will announce to run for the seat.

The litigation challenges the redistricting maps approved by the GOP-controlled legislature as extreme partisan gerrymanders that also diluted the voting power of black residents. Republican legislators say the lines are lawful, created without the use of partisan or racial data. Shortly after a trial in early January, a three-judge panel refused to strike down the maps.