Stan White honored with Order of the Long Leaf Pine 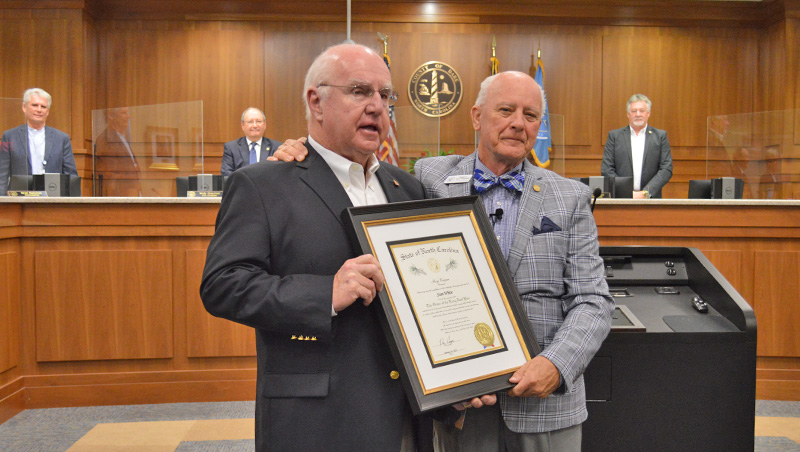 A surprised Stan White received North Carolina’s Order of the Long Leaf Pine on February 7, 2022 at the Dare County Board of Commissioners meeting.

Board Chairman Robert L. Woodard made the presentation.

White started his working career as a public school teacher.

In 1972, he and his spouse Susie started Stan White Realty and Construction in their home. In 1985, the business expanded to its first office and continued expansion to a headquarters in Nags Head. In 1992, the firm expanded northward to Duck and in 2001 opened an office in Corolla, according to a history of the business.

White served as a Dare County commissioner for eight years and Board of Commissioners chairman for three of those years. He provided leadership to build new schools and renovate others.

White graduated from Manteo High School and East Carolina University. He and his wife live in Nags Head.

White was nominated by Bob Muller from Nags Head, Geneva Perry from Kitty Hawk, R.V. Owens from Manteo and Woodard on behalf of Dare County.

In brief remarks, White urged people to get involved in public service. For him, that service has been “the greatest honor and pleasure.”